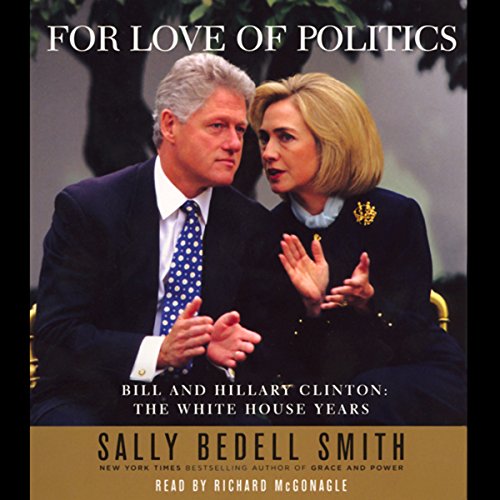 During their eight years in the White House, Bill and Hillary Clinton worked together more closely than the public ever knew. For Love of Politics is the first book to explain the dynamics of their relationship, showing that it is impossible to understand one Clinton without factoring in the other.

Acclaimed author Sally Bedell Smith offers intimate scenes from the Clinton marriage, with new details and insights into how a passion for politics sustained Bill and Hillary through one crisis after another. Smith examines the origins of an unconventional copresidency, explains the impact of the Clintons' tensions as well as their talents, and reveals how Hillary shifted from openly exercising power in the first two years to acting as a "hidden hand", advising her husband on a range of foreign and domestic issues as well as decisions on hiring and firing.

Smith describes for the first time the inner workings of a White House with an unprecedented "three forces to be reckoned with": Bill, Hillary, and Al Gore, and shows how the First Lady's rivalry with the Vice President played out in the West Wing and even more profoundly during the 2000 campaign. As Hillary seeks to follow in her husband's footsteps, this riveting audiobook will leave listeners wondering what it would be like to have two presidents, both named Clinton, living in the White House.

A well-judged abridgement of another SBS political biography. With neither rancour nor favour, SBS chronicles the inside political impact of scandals during the (first?) Clinton presidency.
A timely "read" for this month.

For the Love of Politics

I do wish I had read this book in the Unabridged format.
However, after reading this, I know I will not be voting to put Hillary and Bill back into the White House. I really liked Bill Clintion before reading this book. I did not realize just how much of a liar and how corrupt he was while in the White House. He lived in a deliusion of truth he made up to ease his own conscience. And what a wasted use of his obvious intelligence and execellent education. He missed the lesson of how to live a upstanding moral life. Thinking he was somehow above the rules of living a decent honest life. What an awful example to his daughter.