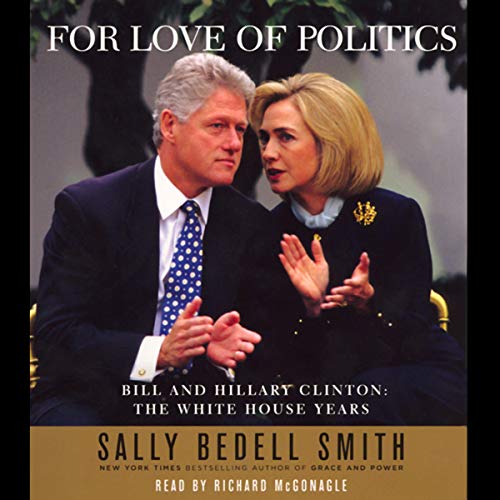 During their eight years in the White House, Bill and Hillary Clinton worked together more closely than the public ever knew. For Love of Politics is the first book to explain the dynamics of their relationship, showing that it is impossible to understand one Clinton without factoring in the other.

Acclaimed author Sally Bedell Smith offers intimate scenes from the Clinton marriage, with new details and insights into how a passion for politics sustained Bill and Hillary through one crisis after another. Smith examines the origins of an unconventional co-presidency, explains the impact of the Clintons' tensions as well as their talents, and reveals how Hillary shifted from openly exercising power in the first two years to acting as a "hidden hand", advising her husband on a range of foreign and domestic issues as well as decisions on hiring and firing.

Smith describes for the first time the inner workings of a White House with an unprecedented "three forces to be reckoned with": Bill, Hillary, and Al Gore, and shows how the first lady's rivalry with the vice president played out in the West Wing and even more profoundly during the 2000 campaign. As Hillary seeks to follow in her husband's footsteps, this riveting audiobook will leave listeners wondering what it would be like to have two presidents, both named Clinton, living in the White House.

Really filled in the blanks

Where does For Love of Politics rank among all the audiobooks you’ve listened to so far?

I think For Love of Politics ranks very high amoung the books I have listened to.

Hillary Clinton. She has so much hate for so many people, I like to try to get insight on that.

Which character – as performed by Marc Cashman – was your favorite?

I liked the whole Clinton impeachment process and what Bill went through.

I am in process of the listening (two thirds through and about to drop it) of this book; and I am very disappointed in it. The author is an obvious Clintons’ basher. She collected all possible and impossible gossips about Clintons and put them all together. I have read somewhere that she spent three years of her life on this book and conducted 160 interviews (I guess, with people who hate Clintons). Just one example: she blames Bill Clinton for being obsessed with politics; she gave example of one couple (the author does not provide names), visiting White house; and later these people complained that all Bill talked about during breakfast, was some current world politics’ issues. Poor guests did not know how to hold on conversation, because they did not know anything about these issues! Oh, maybe they should know something about politics when visiting White House?! After all, shouldn’t you be happy to have President, who is so much in his job that can’t stop thinking and talking about it? Bill Clinton’s era was the best time in my life, to say at least. He was an excellent President; very positive and very active. Young people need to read Wikipedia at least, to know what Bill Clinton has done for this country; all they know is about Lewinski, like no other Presidents in this country had mistresses. Please, give me a break! I feel deep sorry for the author, really. She spent so much time on something she so much hates. That’s probably why this book is so boring. From book it is obvious that she (the author) is a fan of Al Gore. Why, for god sake, doesn’t she write book about him, and have all available pleasure and enjoyment for herself and her readers. In my opinion, for writers books should be like babies, in order to create them you must love them.

Sally Bedell Smith, who wrote the best books ever on the Kennedy White House Years, the late Princess of Wales, the reign of Queen Elizabeth II, and Pamela Churchill Harriman, has again demonstrated her excellent grasp of history and biography with a finely tuned eye for the smallest details, much of it never before revealed about President Clinton and former First Lady Hillary Rodham Clinton. Will be considered one of the best sources of research for future historians.

No love for the Clintons

What would have made For Love of Politics better?

Some objectivity. Less personal attacks on their character. Seriously the only person inside your head is you.

Would you ever listen to anything by Sally Bedell Smith again?

I was impressed by her biography of Queen Elizabeth, though that was weighed towards a loving tribute. Millions have a visceral opinion of the Clintons, and millions of words have been used to describe their every action in the Whitehouse. It therefore doesn't offer any balance or effort of objectivity to simply find quotes from people that agree with your position that these people are evil.

He does a great job reading.

Not really. I didn't feel I was learning anything beyond the character attack, so turned it off about half way. And I am not trying to be biased. I have read most modern president bios and enjoyed Clinton and George W Bush. It about understanding the perspective.

I think the author did herself a disservice by putting this out in the world.

Balanced account of the Clintons in the White Hous

What did you like most about For Love of Politics?

It is balanced in its judgements but by presenting the information as it does allows the listener to reach their own conclusions.

Very pleased and surprised at how my own view of the Clintons had altered.

Fascinating to learn how involved Hillary Clinton was in the policy making process and how she imposed her will on others.

Would recommend to people seeking a far minded account. Avoids both hagiography and blanket condemnation.