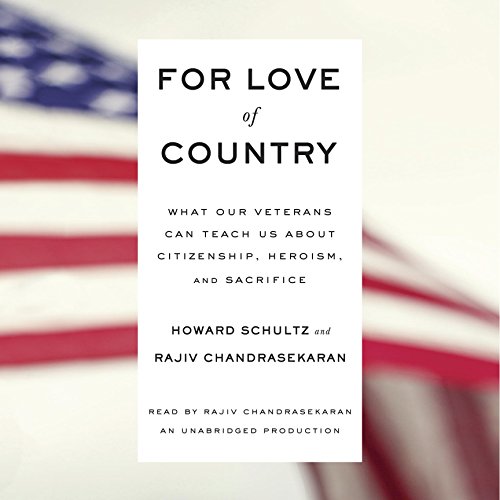 For Love of Country

A celebration of the extraordinary courage, dedication, and sacrifice of this generation of American veterans on the battlefield and their equally valuable contributions on the home front.

Because so few of us now serve in the military, our men and women in uniform have become strangers to us. We stand up at athletic events to honor them, but we hardly know their true measure. Here, Starbucks CEO and longtime veterans’ advocate Howard Schultz and National Book Award finalist Rajiv Chandrasekaran of The Washington Post offer an enlightening, inspiring corrective.

The authors honor acts of uncommon valor in Iraq and Afghanistan, including an Army sergeant who repeatedly runs through a storm of gunfire to save the lives of his wounded comrades; two Marines who sacrifice their lives to halt an oncoming truck bomb and protect 33 of their brothers in arms; a 60-year-old doctor who joins the Navy to honor his fallen son.

We also see how veterans make vital contributions once they return home, drawing on their leadership skills and commitment to service: former soldiers who aid residents in rebuilding after natural disasters; a former infantry officer who trades in a Pentagon job to teach in an inner-city neighborhood; a retired general leading efforts to improve treatments for brain-injured troops; the spouse of a severely injured soldier assisting families in similar positions.

These powerful, unforgettable stories demonstrate just how indebted we are to those who protect us and what they have to offer our nation when their military service is done.

“Inspiring… will certainly move readers who have served in the military, as well as... fans of military histories and those who have close contact with the courageous soldiers who put their lives on the line.” ( Kirkus)
"This splendid book should be read by every American. It is a story of heroes, of sacrifice, of valor. But it is also a story of resilience, recovery, and a continuing desire to serve our country and its citizens. You must be made of stone to read this and not shed tears. But the book’s message is that, after the tears, we must not forget the sacrifices those in uniform and their families have made for all of us over the last thirteen years; we must welcome back into our communities those who served not just with thanks and open arms, but with respect, admiration, and new lives and careers worthy of all they have done for all of us.” (Robert M. Gates, author of Duty)

What listeners say about For Love of Country

Great stories and an even better purpose. Some of the chapters are pretty graphic and the language is rough in places. Don't think it's really necessary in order to tell the stories or make the points.

Every American needs to read this!

Great read on the individual that serve and have served our country. Made me really appreciate how much our service men and women go through.

How amazing are our veterans! An amazing read causing one to want to go out and do more! A definite must read.

Good book. It's nice to see that some people appreciate veterans. And I'm definitely going to look up Team Rubicon!