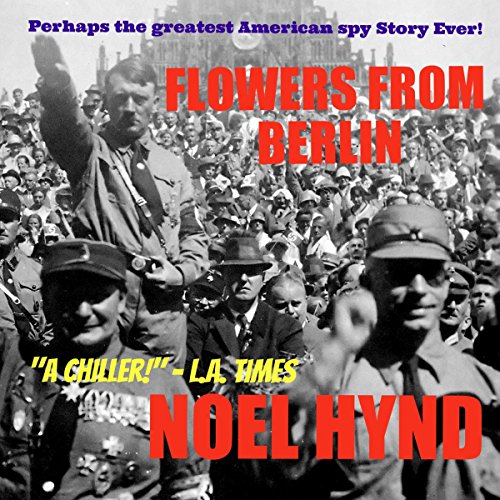 This 1985 espionage thriller follows FBI agent William Cochran's efforts to stop a Nazi spy from assassinating FDR. Toss in a love affair with a British Secret Service operative and you have the makings of a pause-resister.

It is 1939. Roosevelt is winding down his second term in the White House. The Nazis have taken Austria, and Stalin's Red Army is systematically eliminating the Kremlin's enemies. Europe is going to hell in a handbasket. With isolationist sentiment running high in America, and the president's popularity at an all-time low, Hitler seizes the moment and dispatches his secret weapon: An agent named "Siegfried" who conceals himself behind the mask of middle-class America. A chameleon who can change identities and personalities at will. A cold-blooded killer who will win the war for Germany. A banker, linguist, and demolitions expert who has successfully infiltrated German intelligence, FBI Special Agent Thomas Cochrane is handpicked by Roosevelt for an impossible mission: to find Hitler's spy before he carries out a plan that will remove the president from office at a critical moment in the century's history. As Cochrane, with the help of British Intelligence agent Laura Worthington, circles closer to his elusive quarry, a spy with supporters in the highest levels of U.S. government readies the world stage for a final act of annihilation that will alter the tide of war - and the future of the free world - in unthinkable ways.

"Complex in characterization, crisp in dialogue, and thorough in its background." ( Library Journal

What listeners say about Flowers from Berlin

But spoiled by a terrible reader. Not does he mispronounce the German words, he can't even pronounce the English ones (paradigm, allay, etc.). And he can't put the emphasis on the right word either. Then there's the grating Brooklyn accent.

Slow to Start But Builds Steam as is Goes

The story starts off a little slow as characters are built and story lines are established but once you get into the meat of the story, it turns into a nice WWII espionage tale. FBI, British SAS, NAZI's all mixed into a tale of intrigue. This is one of those stories for a winters afternoon when you want to get lost in a good book to forget the cold gray day outside.

Mixes well with actual events and characters such Admiral Canaris and the Abwehr. Went into it with no expectations and really enjoyed the story, well told with numerous subplots some more fast paced than others.

Hard to evaluate the story because the reader was so bad. Odd speaking cadence. Mispronounced both English and German words. Made it to the end but just barely.

The story line is very uneven and does not flow well. The narrater is not a bad reader but is not well versed in English. He very much needs to expand his pronunciation. Wilkes bar? Wan to rhyme with van.
This book suffers from poor editing.

But a terrible narrator whose mispronunciations are jarring. A bit preachy and simplistic but still inter.

You'd expect the narrator of a book named "Flowers from Berlin" to have a basic understanding of German pronunciation. In fact, it's probably safe to say that most educated English speakers know that the German letter w is pronounced like an English v. So there's little excuse for the narrator's constant repetition of "ab-whar" (for abwehr) or "where-mak" (for wehrmacht). Frequent mispronunciations of English words ("panalopy" for panoply, "nonpulsed" for nonplused, "obstensibly" for ostensibly) also distract from the story. Doesn't the publisher have an editor?

The story itself is okay as a routine spy thriller but isn't top-drawer.

Having always been intrigued by the second world war, this novel was a treat to finish. The story is powerful and fascinating. The what-ifs left me speechless. The narration was good, but it was the story, the thoughts and ideas that people had in the years leading up to the US involvement, that captivated me. Yes, it is a story of espionage, but it is so much more. A must read in my opinion.

A truly fascinating story. The group of characters herein bring life to history as so few books ever have. This is a profound "rest of the story" presentation. An invigorating way to spend an evening or two.

Would you try another book from Noel Hynd and/or George Kuch?

What could Noel Hynd have done to make this a more enjoyable book for you?

Well, he would have to become a more mature writer: develop his characters more fully, not resort to packaged dialogue

Would you be willing to try another one of George Kuch’s performances?

No. He has no idea of pronunciation: panoply is read as "panopily"; the Abwehr (naval intelligence service in Nazi Germnany) is pronounced in English.

The plot and the general idea for the novel are pretty interesting, the only thing that kept me going.

No such thing as coincidence in this work.

An excellent synopsis has already been given so there will be no further rehearsal of the story.
The characters are all provided with full back histories and are well developed and, set in the pre war period for the United States, the action feels feasible, exciting and dreadful.
Narration by the excellent George Kuch brings everything further to life with his fine performance.

For readers who enjoy detailed spy stories and accurate historical locations, this is a great book and highly recommended. Good, too, for thriller fans