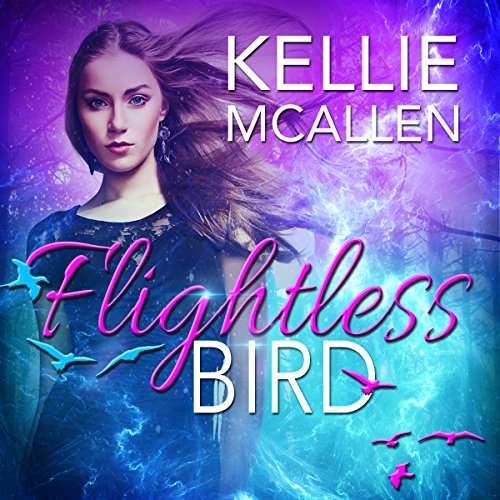 They're powerless without her - she's powerless to resist.

The list of reasons why Lexus Wren is the last girl any guy would be interested in is mercilessly long:

Her dad's in prison for murder, her mom drowns her sorrows every night at Dave's Dive, and Lexus is just trying to survive the cruelties of high school as a painfully shy bookworm with a bad wardrobe, and a collection of nervous habits. Never, in a million years, did Lexus expect to draw the eyes of two hunky transfer students, Phoenix and Griffin Easton.

The troubled brothers are haunted by their own demons, and don't seem bothered by Lexus' tarnished reputation. They're too busy trying to figure out why touching her makes them feel like electricity is frying their insides, and why they're compelled to obey her every command.

You'd think having two hot guys vying for her would improve her reputation, but the bullying at home and school only gets worse. When Lexus' problems reach a critical tipping point, the boys are drawn to protect her, and the truth about their powerful connection is revealed in an explosive confrontation that will astound them all.

If you like paranormal romance stories with supernatural magic, a love triangle hotter than Twilight, and John Green style teenage angst, you'll be captivated by Flightless Bird!

What listeners say about Flightless Bird

The audio was terrible with cracklings and dropping out. The voice actor was fine but not to professional with lip smacking huge auditable breaths and spit sounds.

Much More Than Your Typical Teen Romance

Flightless Bird may be written for the YA/Teen genre however I am 45 years old and thoroughly enjoyed it. The characters are wise beyond their years due to all they have been through. This book touches on many issues that we have either faced ourselves or know someone who has including self esteem, abuse and drugs. The pacing and story line was strong and steady through the entire book. I highly recommend Flightless Bird to any Paranormal Romance lover and I am looking forward to Book #2.

I really enjoyed listening to this audio book. I flipped between reading the eBook and listening to it's audio counterpart easily, and finished this story in a single session. I enjoyed meeting the characters, and I'm looking forward to checking out more books in this series soon.

This reads as wattpad fan fiction, the story isn't terrible for what it is, but it's pretty bland. The characters are brutally stereotypical, generic pretty bookish girl who is picked on, but captures the attention of sexy twins- one who is fun but temperamental and one who is smart but stoical. They all fall in love in a week despite their only "chemistry" being that the hot boys are inexplicably obsessed with her instantly and buy her things. It would have been better if it had been longer, with more time dedicated to fleshing out the characters and make it convincing that they would have any reason to like one another. It might also benefit from a more enthusiastic narrator. Good for someone wanting a backdrop to base a preexisting sexy twin fantasy (plus a very tiny sprinkling of super natural something or other)

I was really looking forward to this book. I am a big fan of high school reverse harem romance. And this story had supernatural elements thrown in. However, due to the terrible quality of the audio and monotone narration I was unable to connect with the story at all. I do not feel that I can accurately review this book because the audiobook was just that bad. A lot of wasted potential.

The book it's self is not bad. The story line is interesting and captures your attention. However the narrator was horrible! so very monotone, very dull and boring. I almost didn't finish the book because of this. Please get a new narrator!!!

Might be an awesome book but I could not make myself finish due to the narration so I’ll never know. Most monotone voice just sounds like she’s reading from a page. I couldn’t complete it and doubt I read the book.

4 and a half stars for this first in a series.

I enjoyed this audio book even more than reading it myself. The narrator did a very good job. The story is interesting and very entertaining. It grabs you right from the start and doesn't let go. I was so disappointed when it was over. I wanted to keep the story going. I highly recommend for teens through geriatrics. I can't wait for the next in the series. I voluntarily reviewed this audio book after receiving an advanced copy that I requested.

Not a fan of love triangle

Its a good start to a YA paranormal romance series. We don't get to know much in this first installment though. The story development is very slow so we only get a glimpse of what is going on with Lexus and her boys at the end of the book. That's ok i can live with that cliffhanger, its a series so will have to keep reading to find out what happens. The biggest struggle i have though is the love triangle. I hate love triangle! Maybe that's why the competition or jaleousy between the twins to win the attention of Lexus got on my nerves. That does'nt mean i wont give a shot for the second book of this series cause i want to know what happens next but the love triangle thing... argh...not.a.fan. If you also like your books in audiobooks try it the narration is good.

What a wonderful story about a girl that is always left out and then meets two good looking guys. The narrator was a pleasure to listen to and easy to understand. I love any stories by this author.

A YA Romance with a Paranormal twist

I really felt for the main character, Lexis. The cruelties she experienced in her high school were, unfortunately, very real. I was happy to see some things start to change when she met the twins. I can't wait to see where this storyline goes.

First book in another brilliant series from this talented author! Highly recommend you read/listen to this book & quickly go grab the next in the series!

Must listen to this book

First I did buy this book on amazon.com where I read it so I knew the story. Sometimes it's just easier to listen instead of reading. This story goes about Lexus and what she discovers. She meets the twins Phoenix and Griffin. They soon like her and feel sparks. They both want to date her and there is rivalty between them. Both wanting to be with her. Lexus doesn't really understand what happens and then unexplainable things happen. This book is very good and I knew I had to get the next one too.

Awesome book with a good audio

I had already read this awesome book but I love to listen on audio when I get the chance. I am going to be honest, the narrator is is not one of my favourites she does not have the range of expression in her reading voice as some others I have heard and her tone is a little plain for lack of a better phrase.

The quality of the recording is not as great as some that I have herd, but all that said, I was able to comfortably listen to the story and it's not so bad that I would refuse to listen to it again.

The story is awesome,

Lexus is poor, her dads in prison and her mum is a drunk. She gets picked on at school and spends he time reading or writing books
Then one night that all changes when she meets Griffin and Phoenix.

Well written it has a great storyline and young love with twin brothers trying to win her affections and out do each other. I thoroughly enjoyed this book and am looking forward to reading book two