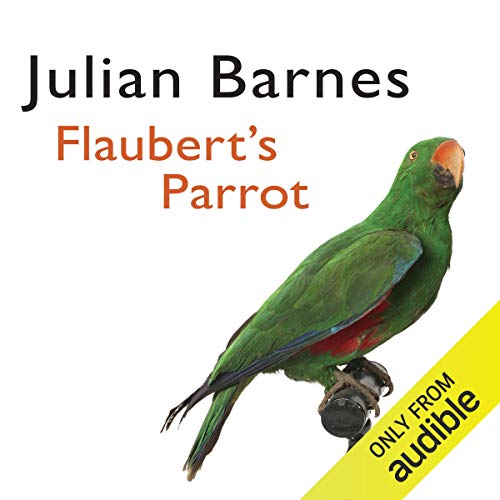 Man Booker Prize-winning author Julian Barnes' 'Flaubert’s Parrot' deals with Flaubert, parrots, bears and railways; with our sense of the past and our sense of abroad; with France and England, life and art, sex and death, George Sand and Louise Colet, aesthetics and redcurrant jam; and with its enigmatic narrator, a retired English doctor, whose life and secrets are slowly revealed.

What listeners say about Flaubert's Parrot

The joke wears thin as the story gets longer.

This shaggy dog story starts well but true to its genre it doesn't have a punchline..

Would you listen to Flaubert's Parrot again? Why?

Imperative! But only, always and ever the UNabridged version.

Why, the parrot, of course.

Have you listened to any of Richard Morant’s other performances? How does this one compare?

Listen to everything this man has narrated, starting with the next Barnes.

And twice over. It only takes 7 hours - less than some ferry crossings!

There is an ABRIDGED version available, read by … the author himself. Don’t be tempted to avoid some of the Flaubert by going for the beastly cut version. Why it was ever made is beyond me. I got it by mistake, and almost gave up on the entire book, because thus shortened it lost the pith of its detail that it depends on for its buoyancy. Was it edited in this way by Barnes himself? Doesn’t he see it utterly defeats the illustration of how a novel IS all its detail (providing it’s well written, of course) and only by its detail gives us that which remains elusive. He must do! So it’s an experiment, aha! An experience in what you CANNOT do to a novel. Ingenious! But avoid it if you can, anyway, if you’re short on time with an ever-growing list of novels to get through (unless you are a Barnes scholar). For the rest, all I can add, pardoning his attempt is that, it is well-known some authors are just not good narrators) and notably of their own work (I bring William Golding to mind). (Barnes reads other people’s work quite adequately, so pick one of those instead if you want to familiarise yourself with his voice - which is always an added bonus once you have become a Barnes-fan…)

The bits about Flaubert in Flaubert’s Parrot are like studying the brushstrokes of a painting. Step back and see the whole. A poor rendition (copy or postcard) of a work may cloud our appreciation or give it, alternately, a special significance. But it is the meaning we value most as a shared experience, and which takes us to its source, in the writer.
As if only meaning can rescue us from our isolation. As if only truth matters. In cases of death or betrayal this often becomes life-saving, but not always available…. We may turn to the novel for consolation. Misery shared is misery halved. Factual errors or the lack of real evidence become fairly irrelevant, we trust the work as a whole. It cradles us between its covers. It expands us in a Novel World.

Conclusion. Well, from my accidental experience of comparing the abridged to the unabridged version we learn, apparently, curiously, real lives can be abbreviated in monographs (like Flaubert’s) but fictitious ones (like Braithwaite’s) cannot. They depend on the novel in its entirety for their existence until you have lifted them out successfully to lead lives of their own in your reality.

Interesting fact: Madame Bovary , as was the custom, was first published as a serial in the newspaper…. Fact living side by side with fiction again. A perfectly common marriage. With interchangeable roles?

Read Artful by Ali Smith for continued musings on this path of the nature of artfulness that is story telling, that is living in a world of language. But also Yann Martell might - incidentally - tickle your curiosity for Flaubert in his Virgil and Beatrice.

Never forget Flaubert’s Parrot was written way back in 1984, and may this testify to a certain timelessness that goes into a great novel. This was before the days of internet, virtual reality, global communities, blogs that frame every person’s life as a valid narrative, and concerns how to distinguish fact from fiction, or how real any given event in time is unless it’s shared. How can anything about Flaubert can be so Avant-Garde?.... Maybe, only anything with Flaubert in it is Avant-Garde!