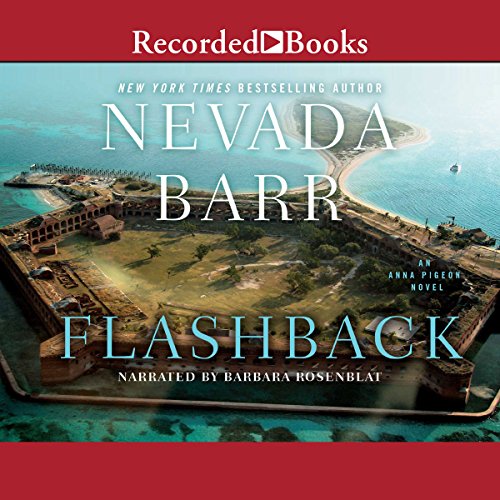 When Sheriff Paul Davidson proposes marriage to Anna Pigeon, he doesn't get the reaction a man might hope for. Intrepid park ranger Anna runs all the way to the furthest scrape of American ground not found in Alaska or Hawaii. How's that for a no?

Anna takes a new post as temporary supervisory ranger in Dry Tortugas National Park, 70 miles off Key West. Dry Tortugas is the site of the former prison for Lincoln conspirators during and after the Civil War. One of the seven islands in the chain is completely encircled by the massive stone walls of Fort Jefferson, a crumbling reminder of the site's gritty past. Now, the park looks like an island paradise. But as Anna quickly discovers, even the most picturesque and seemingly peaceful places have more than their share of shady goings-on.

An exploding boat, the discovery of unidentifiable body parts, and the emergence of secrets both past and present put Anna's life in danger. Cut off from the modern world by poor communications and miles of water, she's developing a nasty case of cabin fever, one that just might pry her fingers from their tenuous grip on sanity. Full of stunning scenery and packed with breathtaking suspense, Flashback is everything a mystery fan could ask for and more.

Back story is boring!!

Most of the Nevada Barr books impart some interesting information about the parks she uses as her backdrop. This one covers the Dry Tortugas off the south west coast of Florida. The Civil War era flash back story is dull and interrups the suspense of the current day story which would otherwise be pretty good.

Flashback is another great listen!

I love Anna Pidgeon. She's just so, well, so normal! She loves, she fears, she runs from emotional ties, she's curious & once she gets her teeth into something, she just can't stop picking at it. This adventure is a little different in that the Civil War history of the Park is interwoven with the present through letters & flashbacks as Anna pursues the Park's ghosts while she works as an underpaid Park Ranger.

This is one of those books you EXPECT to like. A "name" author...a pleasing lead character...but it never gets off the ground. The story destroys its own focus with endless...well...flashbacks...that just get sillier and sillier.

Barr is to be commended for trying something different...even if it's not a very successful experiment.

Oh my goodness, what was Nevada Barr thinking? Intriguing plot presented but excruciatingly slow paced story. Historical references/backdrop interesting, but needs to be pared down. Tough to get through.

Back story annoying and intrusive

I listen to Nevada Barr books mostly because I enjoy Anna Pidgeon. This book is actually two novels in one, and I did not care for the story which was interwoven with the mystery which Anna was unraveling. Actually, I fast forwarded through the second story, and it was annoying to have to find my place again every half hour or so, as the two stories alternated.

This is a Flashback

This is a flashback in every way and if you do not like flashbacks avoid this one. the transitions are good, and keep you on your feet. Will keep you awake on a long drive, not for sleepytime listening.

The winner of "most improbable plot" in the series

I enjoy this series. I enjoyed this book. But it is an out-of-left-field sort of story line, especially because it is part of a series of books that is normally grounded and reallity-based. Not a BAD book, mind you. Well written, as usual, and read well, as usual. Predictable as far as who done what, albeit exactly what the culprit did is ... well ... odd. Just a peculiar book in a good seriese.

Not a waste of a credit

This book is just okay - it's not a waste of a credit, but it's not great, either.

I can't even force myself to write a synopsis, or tell you where the author went wrong - it's just a "meh" kind of book. If you have a credit you need to use up, this is as good a way as any to use it, I suppose.

Did not want this book to end!

Great characters from Barr as usual, and inspired reading from Rosenblat, bringing them all to life. Loved the historical backstory, exotic locale, and themes as immediate as today's news. A must-listen.

Good book overall, got tired of listening to the reader swallow, should consider stopping more often.