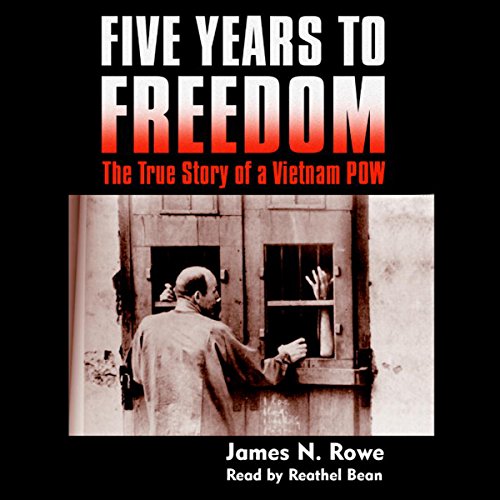 When Green Beret Lieutenant James N. Rowe was captured in 1963 in Vietnam, his life became more than a matter of staying alive.

In a Vietcong POW camp, Rowe endured beri-beri, dysentery, and tropical fungus diseases. He suffered grueling psychological and physical torment. He experienced the loneliness and frustration of watching his friends die. And he struggled every day to maintain faith in himself as a soldier and in his country as it appeared to be turning against him.

His survival is testimony to the disciplined human spirit. His story is gripping.

"The Most Important Book Ever Written About The Vietnam Experience. The people of the United States can be immensely proud of Nick Rowe and Americans like him who have resisted and survived the worst abuse a brutal enemy could visit upon us." (Robin Moore)
"If you can read this story and not weep, you are inhuman." ( The Cincinnati Post)

What listeners say about Five Years to Freedom

My neighbor and friend

Nick would randomly recall to me few of his thoughts of his time in captivity. Hearing these words now, bring a tear to my eye. He is greatly missed by so many.

I also bought the hard copy and tried to follow along as it was being read. the audible version has six chapters the hard copy has 10. seems like audio copy or Mr. Bean did not read word for word as it was in the book.

It's a shame, this book had the potential to be a fantastic read. I really wish they would have went into more detail about is 5 years as A prisoner of war.

A quick read, this personal narrative is clear and unashamed of the brutal realities experienced by POWs in Vietnam. It makes one consider what they might do if confronted with circumstances of confinement or helplessness.

James “Nick” Rowe eventually escaped, and was instrumental in developing the modern Army Survival, Evasion, Resistance, and Escape (SERE) school. His concepts of philosophical stoicism, faith, resistance, endurance are worthy of consideration and understanding, and this narrative is useful in understanding his motivations and development of concepts.

This shortened version really fails to tell the whole story. You really need to read the full book to appreciate his Nick Rowe’s ordeal.

Excellent story of perseverance and strength

Excellent story. The reader has a strong and convincing voice. Be warned the story is short.

An interesting enough book worth money. You wonder how many men will never return from POWs. I would recommend this book.

I enjoyed the reading very much. True story about Nick Rowe's survival and escape from captivity in Vietnam.

cons: this audio version misses WAY too much of his experience as a POW. To understand more, read the actual book. There is a warning that comes with the book and it's the reason that the SERE program was created. Highly recommend the book over this!

Must read for all in the military & high school!

The sacrifices made by men such as Nick Rowe who served honorably in our countries military for his and our freedom must be passed on to the next generation!