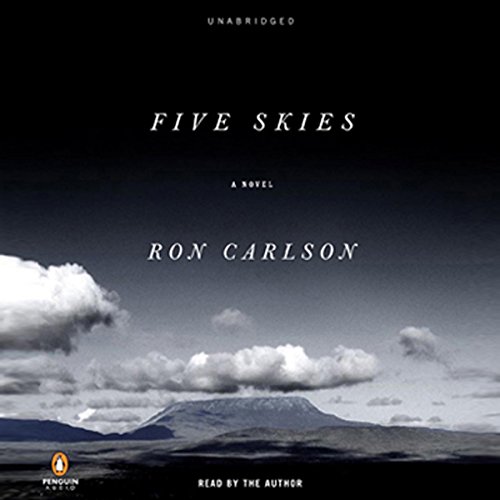 Five Skies, beloved story writer Ron Carlson's first novel in 30 years, is the story of three men gathered high in the Rocky Mountains for a construction project that is to last the summer. Having participated in a spectacular betrayal in Los Angeles, the giant, silent Arthur Key drifts into work as a carpenter in southern Idaho. There he is hired, along with the shiftless and charming Ronnie Panelli, to build a stunt ramp beside a cavernous void. The two will be led by Darwin Gallegos, the foreman of the local ranch, who is filled with a primeval rage at God, at man, at life.

As they endeavor upon this simple, grand project, the three reveal themselves in cautiously resonant, profound ways. And in a voice of striking intimacy and grace, Carlson's novel reveals itself as a story of biblical, almost spiritual force.

A bellwether return from one of our greatest craftsmen, Five Skies is sure to be one of the most praised and cherished novels of the year.

"Carlson writes with uncommon precision, and this return to long-form fiction after four well-received story collections is stunning." (Publishers Weekly)

“Five Skies” written and narrated by Ron Carlson, is a considered and uplifting portrait of male life. Three emotionally scarred strangers find themselves together on a construction project deep in the back blocks of rural Idaho. As spring turns into summer a camaraderie is quietly forged as they gradually reveal their stories to each other. As the summer progresses healing and resolution begin. The story itself is relaxed and measured but at times it flares into life with frightening intensity and the action is perilous and real. The characters are all recognizable and familiar men, fundamentally decent and honest, trying to come to grips with the tragedy and change that life has thrust upon them. Arthur Key is especially memorable as the mentor figure trying to redefine his emotional centre. There are many moments in the story worth revisiting. The depictions of working life. The satisfaction of mastering new skills, problem solving and a job well done. The simple pleasures of a meal under the stars after a tiring day. The joy of watching a young man growing into himself. While not a faultless novel, any inconsistencies can be forgiven for at its heart this story is deeply authentic. This was a first-rate audio experience, compelling and absorbing, and I recommend it without hesitation.

From a woman's perspective, I think this book reminded me of forgotten parts of a man's psyche. I'd especially recommend this story to young men in high school. Young girls with a penchant for building things or a desire to better understand the men around them might enjoy it too. The characters are believable and the values they demonstrate are excellent. This is a story about forgiveness, and it's worth a listen. Doesn't have a fairy tale ending.

It's a simple book and has that sort of "Cowboy Way" type of feel - little said with so much more implied, but I really enjoyed how this book flowed and how you felt like you really knew these men by the end of the story. It was eight hours well spent. I ended up finishing it in one day because it kept me so intrigued.

It took my breath away!

Ron Carlson is, by far, my favorite fiction writer and this novel is his best yet. I can't wait for his next.

A rough sketch for a book

Predictable, repetitious character studies that never quite resolve central questions, and finish anticlimactically when the author gets tired of writing. Skip this one.

I Didn't Get It

Maybe I am too much of a "girl" or maybe as another reviewer suggested, this story is too similar to a Cormac McCarthy book (and I cannot tolerate his works), but this was not a great read for me.

It was slow to give me anything to catch on to and it did eventually, but it was so weak it didn't last. And the ending was especially anticlimactic. For knowing someone would die, when it happened ...it was over. And so was the book.

A simple yet engaging story of three men rebuilding their lives, set in a tough but beautiful desert wilderness. Carlson's dialogue is spare but clever, while his characters are interesting and carefully drawn although all would have benefited from further development. This doesn't detract from the enjoyment of this methodically paced and evocative story of heartbreak, recovery and friendship. Some beautiful turns of phrase and great descriptions of the high desert environment. Carlson narrates his own story, and gets the mood right. Recommended.

The plot unfolds in bits and pieces, as another reviewer said, as the three characters learn to trust each other - and perhaps themselves - better through the course of their work together. A novel more about character development and what it takes to live a life worth living, than adventure plot, there are still lively moments of action. I found it thoughtful and well-suited to audio. I will listen to it again with pleasure.

This is an excellent story told from a low-key male perspective. It reminds me of Cormac McCarthy's work, but without the surfeit of violence. The author's reading of the story provides a calm, yet well-paced progression of the tale and the development of the characters. Just as you would expect in dealing with men, you eventually know much of their background stories, but they are played out in a natural manner as the story progresses and the characters get to know and trust each other.

The main character, Arthur Key, opines early in the story that "someone is going to die here." You don't know who it will be and it doesn't dominate the story, but its there as an undercurrent to both the physical activity and to the interactions of the three main characters with others.

I thoroughly enjoyed this story.

This wasn't the most exciting book I've ever listened too but it was a nice story, kept me interested and the narration was good. A nice change from murder mystery.