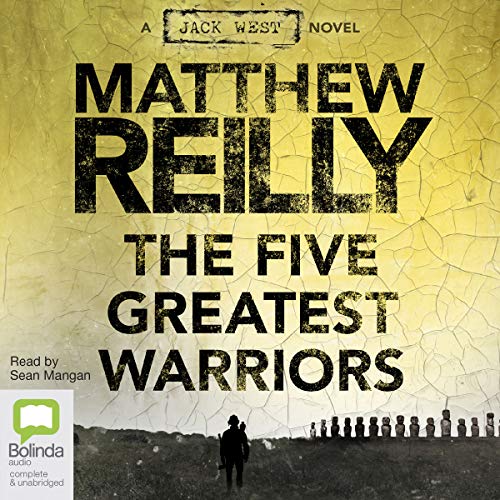 IT BEGAN WITH SIX STONES Jack West Jr. and his loyal team are in desperate disarray: they've been separated, their mission is in tatters, and Jack was last seen plummeting down a fathomless abyss. IT FINISHES HERE. After surviving his deadly fall, Jack must now race against his many enemies to locate and set in place the remaining pieces of The Machine before the coming Armageddon. WHO ARE THE FIVE WARRIORS? As the world teeters on the brink of destruction, he will learn of the Five Warriors, the individuals who throughout history have been most intimately connected to his quest. OCEANS WILL RISE, CITIES WILL FALL. Scores will be settled, fathers will fight sons, brothers will battle brothers, and Jack and his friends will soon find out exactly what the end of the world looks like...
©2009 Karanadon Entertainment Pty Ltd. (P)2009 Bolinda Publishing Pty Ltd

At last the conclusion of Matthew Reilly's Jack West Jr. series has come and all bets are off. When last we saw the bold Australian adventure, he was plummeting down into an endless darkness towards a terrible death and the rest of his team made up in 'Minos', are in disarray. Any disappointment loyal readers felt at this stunted end to the Six Sacred Stones, has been appeased in this final installments.

Against the tightest of deadlines, the 'Minos' stumbles on against their evil rivals (including Jack's father) to prevent them in gaining control of the 'Machine' and the gifts it bestows.
Jack must lead his team over continents, into the clutches of ancient traps and at the rise of planets and moons, they will come face to face with the 5th warrior.

The gory and intensity of the first two installments are continued in The Five Greatest Warriors, no doubt much to the delight of fans. While Reilly adheres to many of the adventuring trilogy staples, he definitely throws some surprises at his readers. One of the things I like most about this series, is that the main character is Australian; brave and clever, without falling into the usual stereotypes. I am very much hoping that the next Jack West Jr. tales will be near in the future. In perfect Reilly style, this trilogy is concluded leaving your glued to your seat until the last page without missing a beat.

Sorry guys, West should not sound like Austin Powers.
Couldn't even get through chapter 1.

I loved this book, i also loved how it wasn't predictable as that kinda is annoying. I enjoyed the narrator through out the series so far. if you haven't read these books do it!!

If your an avid fan off ALL Matthew Reilly books, this has some real surprises.

I really enjoy Matthew’s books especially the jack west jr series...
Wasn’t a fan of the narration, it sounded very computerised, like a male ‘Seri’. However I was not deterred and I did get used as I kept listening to it!!!

Despite getting way too heavy on certain historical factors for me (I just could not keep up), the fast paced action kept me wide awake on the long work drives. Now for the next one.

LOVED IT. Matthew Reilly has become my favourite writter. Every Matthew Reilly book that I've read, i have not wanted to put down, and once finidhed leave me desperate to read more of his works... Especially the Jack West Jr books, which are so exciting, fun, fast paced, and totally action/history packed... I cant hardly wait to find out what happens next. Jack West Jr truely is 1 of the worlds greatest warriors... Thank you so much for your stories Mr Reilly, i love them and recommend your books to all i know.

We listened to this audio book whilst on a long trip and it made the time fly by. Gripping adventure from start to finish. Fabulous

Classic Reilly does it again!

Matthew has done it again. The detail in the book and they way it's read actually allows you to picture it just like watching a movie. Great work!

Who is the fifth?

This is an excellent finish to brilliant series of fast paced action adventure. Well narrated by Sean Mangan and brilliantly written and researched by Matthew Reilly. Who is the fifth great warrior? Listen and read the final book in the series that began with Seven Ancient Wonders to find out. Who will gain the ultimate power over life and death? Can Jack, Lily and their team save the world again?

Kept me on the treadmill longer than planned

Where does Five Greatest Warriors rank among all the audiobooks you’ve listened to so far?

I've only listened to Matthew Reilly books and I'm sad to say I've done them all and am at a loss for what to do at the gym next. Love audio books, really enjoyed the narrator... great way to make gym time disappear way too quicly

As usual I enjoyed this latest book by Matthew Reilly. Parts of it are pretty unbelievable, but it is an adventure book. Great listening.

I'm not one for military books, I find them too gung-ho, but I absolutely loved this book and the series. Some of Jack's efforts are far fetched, but Matthew Reilly's ability to draw you in, with so much detail and plausible scenarios. I found it very much like an Indiana Jones movie except with an ex_Special Forces lead character who wants to save the world, along with his entertaining sidekicks. I couldn't get enough of the story, and had trouble turning it off, once you get used to Sean Mangan's voice. Overall, I definitely recommend this

I absolutely love Reilly's Books. I love Scarecrow and Jack West. The chases, the thrills, the twists and the turns. love them all.