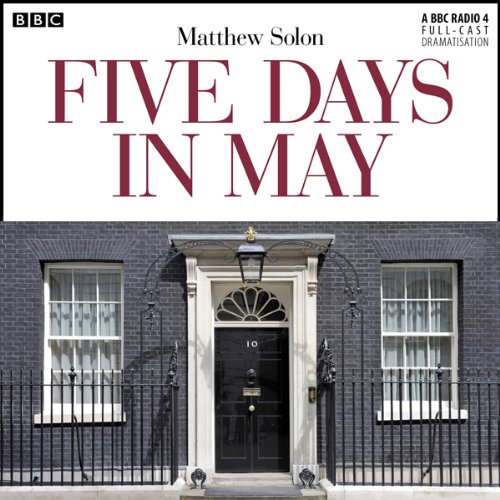 Five Days in May (Dramatised)

Written by Matthew Solon. This play tells the story of the tense negotiation that followed the 2010 general election, which led to the country's first post-war coalition.

Based on interviews with those who were at the meetings, political journalists and on published material - and using actors to play all the key characters - this is a compelling account of those five momentous days in May.

Under extreme pressure and suffering from lack of sleep, the politicians argued and negotiated. There was nothing inevitable about a Conservative-Liberal Democrat coalition. Revealing key moments of the negotiations, the drama unpicks what went on behind closed doors and shows how an alliance between the Conservatives and Liberal Democrats gradually formed, and how it withstood the resignation of Gordon Brown.

Based on painstaking research, this is a must-listen 60-minute play. It’s a compelling and entertaining account by award-winning writer Matthew Solon of the most extraordinary British election outcome in 70 years.

Other parts are played by Charlotte Longfield, Wilf Gilmour and members of the cast. Producer/Director: John Dryden. A Goldhawk Essential Production for BBC Radio 4.

What listeners say about Five Days in May (Dramatised)

Not much else to say, other than its great. The accents are very bad, sometimes you dont know who is speaking, and often you cant tell what is based on fact or fiction...but there is something about it that is great. Its probably the historical significance...and the sense that on the whole it is a very accurate representation of the feelings at the time.

Great cast, interesting piece of recent history
Really enjoyable. Good use of my token this month

The author really knows his stuff!

Interesting and fast-paced portrayal of the goings on inside Number 10 over the course of five days leading up to Gordon Brown's resignation . The dialogues were so realistically written and performed that it felt like actually being there. A very informative and entertaining listen!