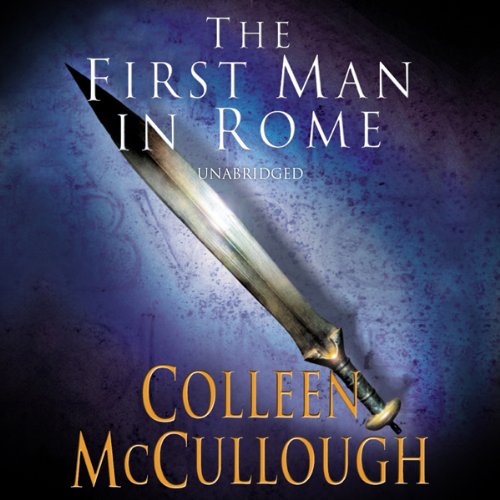 The first book in the epic Masters of Rome series. Rome. 110 B.C. A city which is home to Gaius Marius, prosperous but lowborn, a proud and disciplined soldier emboldened by his shrewdness and self-made wealth. It is also home to Lucius Cornelius Sulla, a handsome young aristocrat corrupted by poverty, a shameless pleasure seeker. Two men of extraordinary vision, men of ruthless ambition, both blessed and cursed by the special favour of Fortune. Men fated to lay the foundations of the most awesome empire ever known, and to play out a mighty struggle for power and glory - for Marius and Sulla share a formidable ambition: to become First Man in Rome.

The story repeats/ skips back every 5 mins...

While the story is amazing, and the reader well spoken, the tracks skips backwards every 5 mins and you're forced to re-listen to the same section.... Again and again and again....

Would be good listening if the file was uniform

Great storytelling, but the file chapters keep slipping back and forth and ruining the experience. Hopefully this will come to audibles attention soon and will be fixed promptly.

What would have made First Man in Rome, Part 2 better?

A usable audiobook!
The downloadable files are grotesquely mangled.
Blocks of the text (sometimes a few sentences, sometimes whole chapters) are repeated, popping up at seemingly random places in later parts of the file. This happens dozens of times, and it makes for a maddening listening experience.

As reported by Ken, this brilliant book has been utterly mangled by poor editing of the download files. how this was achieved is difficult to imagine as the repeated sections and interruptions seem to happen almost randomly.
Do not buy until this has been fixed!

Super first book but the second has been badly let down by a shocking editor. And of course it is useless to read the first without the second being available to enjoy.
What is most annoying is that I had seen the poor reviews of the second book and so had contacted Audible to assure myself that the problem had been corrected before purchasing it.
Well I can assure you that the problem remains.

Action Audible! And fast or your reputation will sink as will your sales.

A most annoyed customer.

Do not buy - an editing mess

This recording is littered with repetitions and gaps. In some cases several chapters are repeated all over again. In almost every chapter, a section of 20 seconds or so that has already been heard in a previous chapter is repeated, usually in the middle of some other passage making it all very confusing on an ongoing basis.

I can see other reviews complaining but nothing has bern done yet. I have complained to audible but it is not yet clear whether anything will be done. I will rereview if the problem is cured, but till then you can assume this recording will be a mess and quite a struggle.

Brilliant book, the audio quality on part 2 purchased on audible is not as good as part 1 purchased on iTunes. Part 2 is also dreadfully edited, has anybody even listened to this?!?? Passages repeat halfway through a chapter. Makes listening very frustrating.

Very poor Audible. You have let Colleen McCollough down.

I totally love these books, i have them all, however the editing on this audiobook is terrible sentences are repeated constantly, you end up going over parts of the chapter that you have just listened too its very confusing.

Would you consider the audio edition of First Man in Rome, Part 2 to be better than the print version?

Both have merits. Rather missed the maps and portraits in the print version.

Marius. In this volume, he is a real hero but bluffly unassuming

How the Roman Republic really fell

I am always sceptical about second books when I have really enjoyed the first. Often they disappoint. This one didn't. It exceeded all expectations. A joy to read. Bring on the next one.

To put it simply, I couldn't stop listening. A truly remarkable work of historical fiction based soundly in historical fact. As a fan of this type of literature, I heartily recommend this example.

Not a single character appears but is fully rounded and fleshed out; the author happily delves back into a particular character's past then effortlessly brings you back to the current plot. The plots themselves are beautifully complex without being complicated. Her true masterstroke (amongst many) is in making each character human. The enemies of the books 'heroes' are not villains - simply differently minded. Even our protagonists are not above selfish or violent deeds. All is so well presented in the social and moral code of the time, without any modern comment, that you begin to forget you're reading a historical work.

Having finished this listening to this audio book, and part two, this represents over 31 hours of pure listening pleasure. I can’t wait for the rest of the series to follow.

Despite the quite poor previous reviews I risked to purchase the book. Especially since the part 1 was already finished and the interest in the story was roused. I can only agree with my fellow audible members - the editing quality is extremely poor. The text repeats itself from time to time, which is very confusing and frustrating as the story line gets lost and the listener gets a kind of deja vu feeling. It is strange that after numerous reviews specifically pointing out the quality issues, nothing has been done. The price of the book is considerable, so one would expect a respective quality.
All in all - the story is great, the characters are well presented and give the reader an educational as well as literary insight in Rome`s society and political structure. Despite the quality issues certainly recommended for the ones interested in that period of our past.