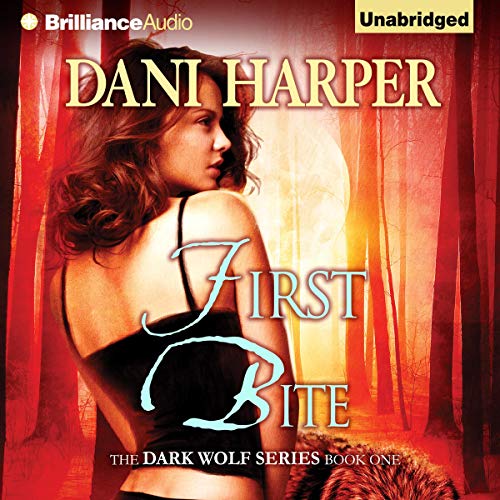 Geneva "Neva" Ross never wanted to be a werewolf. Now that she's been turned against her will, she thinks suicide is her only choice. She can't risk hurting the people she loves when she takes on her monstrous new form.

After witnessing Neva's leap from a high ledge, Travis Williamson - a Changeling with a dark past - uses his powers to save her life. Days later, Neva wakes up in the hospital as Travis speeds out of town. But he risks everything to turn back and kidnap her, knowing the approaching full moon will put everyone in jeopardy. Soon Travis and Neva go on the run together, desperate to escape the police…and far darker forces.

Neva's sinister sire, Meredith de la Ronde, vows to find her pack's runaway. And when she does, Neva will join their murderous ranks...or die.

What listeners say about First Bite

Would you consider the audio edition of First Bite to be better than the print version?

For me it is since I am legally blind. I can only enjoy audio books. I love them.

I love the different voices she makes. Sometimes it's hard to tell that only one persone is telling the story. She reminds me of Miss Ronconi they both have great vocal talent :)

I have listened to it all in one sitting about twice already.

Yeah! Don't leave me hanging!I am dying for the next book because I know that the story can't just end like that. They still have to stop the evil twin!!!!!

NUMBER OF HEARTS: 3
REVIEW:
I am kinda on the fence about this book. I liked the story line. I liked Neva & Travis and a few of the other side characters. Meredith is one crazy, evil, magic wielding bad guy. And all in all it was a good book, but there was just something a little off for me. Maybe be it was the timeline. Maybe it was Meredith and her getting the upper hands. Maybe it was my mood. Or maybe it was the narrator. I was not overly wild about the narrator at times she was a little too nasally for me and the audio book had some major fluctuations in the sound and quality of the book. Even with all I will be continuing this series to see what happens with Neva, Travis, Meredith and everyone else. But the next book I think I will read.

Disclaimer:
This review is my own opinion and not a paid review.
Review will be posted at www.books-n-kisses.com .

Good characters, magic, werewolves, death. The Book had many good points but the twin sisters didn't get very well. One sister was good, she gave love and helped everyone. The other sister was evil and destroyed everyone. When the bad sister had the opportunity to destroy the good sister she just walked away from killing in which she did many, many times previously. The ending should have been really different. This was a slight let down.

Great running erands book. Newly changed Nevada don't look forward to her first change. She want to kill herself, until he showed her on worth. How to stand up to her twin and her inner wolf. #Shifters #UrbanFantasy #tagsgiving, #sweepstakes

could have been good, but crashed...

Throughout the whole book the narrator sounded as though she was struggling with a severely congested nose...horrible, book would have been ok otherwise. I struggled to get through it...

This was an excellent story. Very imaginative with great characterizations. The narrator did a good job too, but who ever did the actual recording wasn't very good at it. You could hear where different recording sessions started & ended. Sometimes it sounded good & others it sounded like she was reading from the bottom of a well, all echo-y.

The story itself was enjoyable enough that I would read more in this series, but it was released in 2013 & I don't see a Book 2 anywhere. That's too bad. 😩

This was an okay book. it left a lot of unanswered questions, so I'm assuming it's the first in a series.

Loved the story. Would love to read the rest of the series. Please finish it so that we would know how the series ends.

I gave this 3 stars because I'm not going to finish listening. I'm going to finish by just reading it. The story seems ok but I'm having a hard time with the narration, so I'm not sure, yet.

As to the narration: I went with the two reviews but that was a mistake. One said the narration wasn't so good and the other gave it 5 stars. Needless to say, the one who gave it 5 stars gave every book she's listened to 5 stars straight across. Which I didn't see until I'd already bought the book. Well, if you don't mind having the voices of both the hero and heroine sound alike, then jump on this one. I happen to like my H/h to sound different. This is the only book Ms. Muench has narrated and the only thing I can tell her is "change your voice for different characters or give up narrating." Narrators can kill a book and she killed this one!!