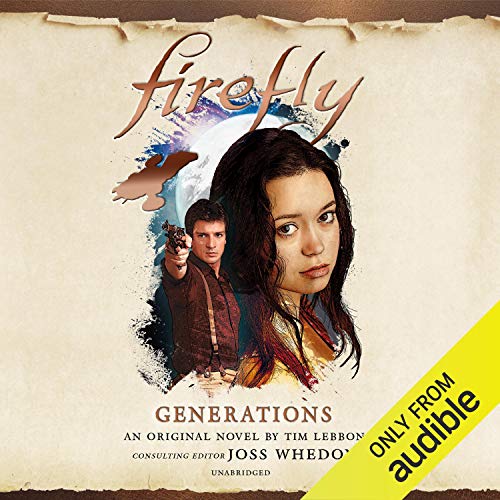 The fourth original novel from the much-loved space Western Firefly, produced with Joss Whedon as consulting editor, set between the TV series and the movie Serenity.

On an Outer Rim moon, Captain Malcolm Reynolds ends a card game the lucky winner of an old map covered in mysterious symbols. The former owner insists it’s worthless; back on Serenity, River Tam is able to interpret it.

River claims the map points the way to one of the Arks: legendary generation ships that brought humans from Earth-That-Was to the ’Verse. The salvage potential alone is staggering.

As the crew approach the aged floating ship, they find it isn’t quite as dead as it first seemed. The closer they get, the more agitated River becomes. She claims something is waiting on board, something powerful, and very angry....

What listeners say about Firefly: Generations

One of the better ones

Finished well and lots of drama, in the Serenity way , of course. lol

This is a great addition to the Firefly saga. The book is fun from start to finish. As usual it sucked me in and I couldn’t put it down.

Worth every credit. Much good firefly lore. it was a little unfortunate that Book and Inara were written out again.

WHAT A GREAT CONTINUATION OF THE FIREFLY SERIES

This is one of the BEST sci-fi series ever seen on the tv and the big screen! Why it was cancelled is beyond comprehension, but these new books are a great addition to the series. This is a credit towards Joss Whedon’s original Firefly. Tim Lebbon is a great writer and does a good job in the mixing of suspense, curiosity, action, and satisfaction! He does not make the reader (or listener in this case) wait for 8 or 9 hours of story until they achieve some satisfactory resolution to the mystery in the beginning of the book. He breaks down his stories into events and satisfactory conclusions. By the end of his story all of it comes together leading up to the main reveal at the end of the storyline. Honestly though, this series makes me want to travel the stars and see for myself, exactly what is out there. Makes me wish i had been born 1000 yrs from now. Who knows, but maybe I will come back in another life when we finally begin colonizing other worlds. It is going to happen. 500 yrs ago most religions would burn you to death if you said humans would fly, or walk on the Moon, and/or communicate near instantly with people across the oceans. Yes, someday humanity will thrive on multiple planets. It may be that humanity already exists on other worlds. We may have colonized Earth and lost the knowledge or more likely those which crave power and control had the knowledge fully destroyed in order to gain or maintain control over the masses. I do not give 5 stars because every story can be improved upon, but this book is definitely 4.5 stars or higher. It is worth the $$$ and time required to listen.

I was dubious that the narrator could me make believe that I was I in the Verse and having fun with Mal and the crew but he did a great job, the tale itself is light reading and flows well with some secrets from Rivers past revealed

Great addition but not the best one.

Not the best one but still a pleasure. Hopefully he keeps these books coming as I've enjoyed all of them so far.

This is possibly the best Firefly book so far....a real action packed rollercoaster, and very well narrated. It'll make you wish the TV series had made it into another 5 seasons at least. More, please! Much, much more!

Not entirely done yet (30min left)... but the only way this story could be cannon to the rest of the universe is if the crew gets amnesia or it's a dream like in ghost machine. - Because.. this is so out of cannon with Serenity that I'm questioning if Tim Lebbon is aware of the rest of the universe of firefly.. I'm very confused about this, however.. on its own.. This is a really cool story! So I'm just gonna ignore canonical errors and enjoy another visit with the wonderful crew of Serinity. Stellar job by James Anderson Foster! as allways