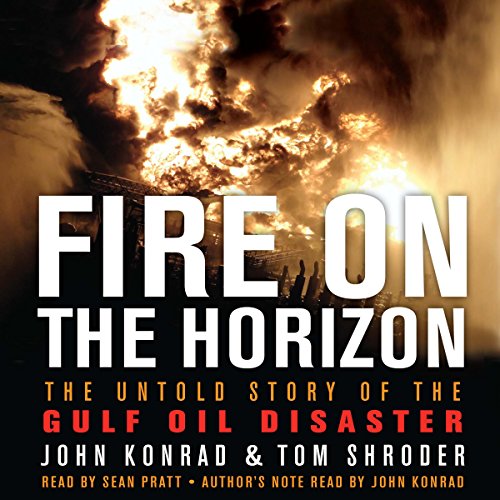 Fire on the Horizon

The Untold Story of the Explosion Aboard the Deepwater Horizon
By: Tom Shroder, John Konrad
Narrated by: Sean Pratt
Length: 8 hrs and 22 mins
Categories: Non-fiction, Technology
4.5 out of 5 stars 4.4 (7 ratings)

Fire on the Horizon

A real-life thriller in the tradition of The Perfect Storm.

In the spring of 2010 the world watched for weeks as more than 200 million gallons of crude oil billowed from a hole three miles deep in the Gulf of Mexico. Warnings of various and imminent environmental consequences dominated the news. Deepwater drilling - largely ignored or misunderstood to that point - exploded in the American consciousness in the worst way possible.

Fire on the Horizon, written by veteran oil rig captain John Konrad and longtime Washington Post journalist Tom Shroder, recounts in vivid detail the life of the rig itself, from its construction in South Korea in the year 2000 to its improbable journey around the world to its disastrous end, and reveals the day-to-day lives, struggles, and ambitions of those who called it home.

From the little-known maritime colleges to Transocean's training schools and Houston headquarters to the small towns all over the country where the wives and children of the Horizon's crew lived in the ever-present shadow of risk hundreds of miles away, Fire on the Horizon offers full-scale portraits of the Horizon's captain, its chief mate, its chief mechanic, and others.

What emerges is a white-knuckled chronicle of engineering hubris at odds with the earth itself, an unusual manifestation of corporate greed and the unforgettable heroism of the men and women on board the Deepwater Horizon. Here is the harrowing minute-by-minute account of the fateful day, April 20, 2010, when the half-billion-dollar rig blew up, taking with it the lives of eleven people and leaving behind a swath of unprecedented natural destruction.

I found this book to be compelling and full of the very real drama on the Deepwater Horizon. The author is knowledgeable and knew many of the people on the Horizon personally. The story is rich with first-person accounts of the history of the rig from its construction right through the disaster

What I appreciate most about the book is that the authors kept emotion, conjecture, and conclusions out of it, and simply told the story of what happened. There is plenty of drama, however, and the book is anything but dry. In fact, it is so compelling I can hardly put it up. I appreciate hearing the human story and the technology of the deep water drilling rigs with the dramatic story of the blowout and the abandonment of the rig.

I read this because I was curious about the physical causes and human factors which led to the tragedy. I was skeptical that I could find a book that was not trying to beat a political drum, either to condemn fossil fuel consumption or to glorify it. This book delivered. It seems to be a balanced, objective account of what happened. The similarities between operations on a rig and the building of spacecraft (my profession) were striking. The utter complexities involved in engineering achievements on a large scale and the seemingly unwinnable battle over human complacency mark both industries. The key difference has to be that the workers on a rig are personally exposed to considerable daily danger, while spacecraft builders, aside from a few key operations involving highly toxic and flammable propellants, are unlikely to deal with life threatening situations on the job.
&quot;Fire on the Horizon&quot; does a great job of building up a litany of mundane and everyday events, which insidiously conspired basically through chance to lead to the disaster. It does not take much imagination to transport yourself to that rig in the days and hours leading up to the blowout and wonder if there is anything you could have done differently had you been there.

This is the 2nd audio book I listened to on the Deepwater Horizon. I much preferred this one based on the detailed information provided on how the accident occurred and the people involved. The reading was excellent and held my attention throughout. The movie gives a reasonable overview of what happened. This book is excellent as describing how and why.

Some inaccurate information, but a great book.

I loved this book. there is some inaccurate information, especially around the BOP failure, and Cajun name pronunciation is butchered, but overall, I loved it.

The story was an excellent blend of documentary account of the human tragedy and the technical failures that led to this disaster.

This is the type of book I love, issued as soon as possible by a great author. His attempt to make the dead friends and relatives of his sources look good is understandable, but a mild distraction. His description of the culture on a floating oil rig is great, as is his rendition of what it's like to be in the middle of an explosion. The turbines revving in spite of the automatic shutdown, fed by airborne gas and their own momentum until the scream rose beyond the range of human hearing, haunts me. I can hear it in my bones. What fiction writer could have conceived such an omen of doom?

I believe that there is no ‘absolute truth’ when it comes to a book or a film about an event like this.

It is well documented that many people, involved in the same horrific situation, will have different recollections of the same event. Therefore the truth for one will be different than that of the truth for another.

With that as my background information for comparison I have to say that that feel this book is pretty damned accurate. There are a few discrepancies towards the end between interview and movie, but nothing to get in a tiz about.

The author wasn’t on Deepwater Horizon at the time, but is/was a veteran in his field and provided an in-depth account of how an oil rig is built and manoeuvred into position. Plus lovely little extras on how oil is formed. (Not by dinosaurs apparently, which is what I was thought)

There are lots of details for the lay person to deal with but the author explains them well and I felt this very informative and when he gets down to the nitty gritty of this dreadful situation he comes across as well informed and very knowledgeable.

The narrator is excellent and I recommendation this audiobook.

Too Technical to Enjoy

At times, this book reads like a textbook and is difficult to stay engaged with.