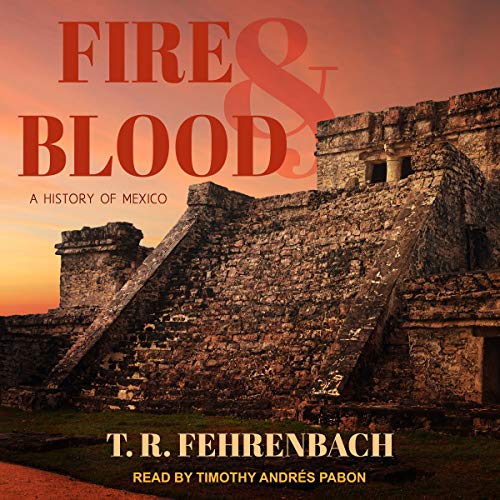 There have been many Mexicos: the country of varied terrain, of Amerindian heritage, of the Spanish Conquest, of the Revolution, and of the modern era of elections and the rule of bankers. Mexico was forged in the fires of successive civilizations, and baptized with the blood of millions, all of whom added tragic dimensions to the modern Mexican identity.

T. R. Fehrenbach brilliantly delineates the contrasts and conflicts between them, unraveling the history while weaving a fascinating tapestry of beauty and brutality: the Amerindians, who wrought from the vulnerable land a great indigenous Meso-American civilization by the first millennium BC; the successive reigns of Olmec, Maya, Toltec, and Mexic masters, who ruled through an admirably efficient bureaucracy and the power of the priests, propitiating the capricious gods with human sacrifices; the Spanish conquistadors, who used smallpox, technology, and their own ruthless individualism to erect a new tyranny over the ruins of the old; the agony of independent Mexico, struggling with the weight of its overwhelming past and tremendous potential.

Throughout the narrative the author resurrects the great personalities of Mexican history, such as Motecuhzoma, Cortes, Santa Anna, Juárez, Maximilian, Diaz, Pancho Villa, and Zapata. Fehrenbach, who has updated this edition to include recent events, has created a work of scholarly perspective and gripping prose.

What listeners say about Fire and Blood

I only listened to the first hour, but when the author described the early religion as a "cult" and called the Indigenous people of Central/South America as uniquely wrong in their take on religion, I noped out hard.

Full of Detail, Data and Drama

The initial part regarding the migration history of the bloodline is a little out dated but that cannot be blamed on the author. It was a bit confusing to follow the tribal names and there locations in an audio format. I am amazed at the level of information that even exists about the Spanish conquest and what really went down. It is interesting to hear the intricacies of how things played out and then comparing to the sparce tales I have heard in my past. The later more modern times are informative and I found it strongly tied to breaking free from the class divided Spanish way. I feel more understanding of a culture that went down a far different path than the United States did but yet are working hard and making progress.

I liked the book, lots of history. It is a bit dated now since the last up date was in 1995.

The narrator reads this like he is reading to 3 year olds. I recommend taking a close listen to a sample before purchasing. I only lusted to the first chapter but the writing itself was good.

Before reading this book I had been to Mexico six times already and still knew very little about its history aside from that which I was able to catch written down a few plaques as I walked about tiny plazas. This book did everything to change that. I loved the narration and I loved the explanation of language and a common culture among the Mexican people. Truly one of my favorite listens.

As Good As It Gets

This is a sweeping history of Mexico originally published in the early 1970’s and updated in late 1990’s (over thirty years ago). Some prefatory notes:

- This is not a chronology, but a historical account written to include the biases, opinions, and worldview of the author pertaining to the subject (in 1971).

- Fehrenbach makes it known that he subscribes to the maxim of recording history by “Judging people against the times they inhabited”. If you don’t strongly disagree with this, you shouldn’t have many moral objections to the narrative.
End Preface.

Spoiler Alert: Mexican history is epic, it is tragic, but it is hopeful.

It takes us from ~12,000 years ago to the close of the 20th century, but it certainly explains the country of today, right up to the most recent news cycle.

The story here is told with pace and with gusto. It is deeply layered so that you can re-listen to sections and continually get more out of it.

The focus is socio/political economic. Heavily oriented toward explaining the evolution of “human progress” and “development” in the context of tradition.

As such I didn’t agree with all of it as it relates to today...
author champions mestiziaje which 50 years later I think served its purpose.
We know better today than to sweep aside Indigenous culture in the name of “progress”. It is just as valuable as any other, if not even more profound.

There’s not much more that needs to be said here, if you’re interested in Mexico it’s certainly worth the credit or the price for 35 hours plus of quality content

Great book that covers a ton of material without becoming tedious. This was well worth the time invested.

I really appreciated the information. The mix of American English accent for some words and some words pronounced with Spanish accent was a bit strange at times. I most benefited from the "middle half" of the book about Independence and Revolution.

If you love history or Mexico, heck even Texas you need to read this book.

Touches on the important events of Mexican history. But the facts are outweighed by opinion and bias. If you are looking for a serious and indifferent history, this is not it.