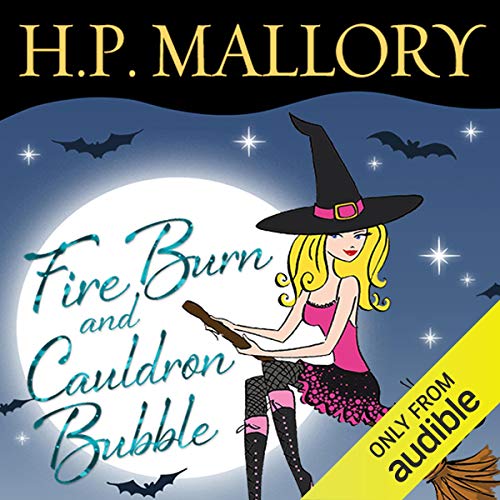 Jolie Wilkins has a good, if not average, life: a cute house in suburban Los Angeles, a cat, and a steady career as a psychic. A love life of any kind, however, is one thing that consistently eludes Jolie. With a sassy and energetic delivery from veteran performer Allyson Ryan, Fire Burn and Cauldron Bubble is a witty romance that follows the terminally single Jolie from an encounter with the "sinfully attractive" warlock Rand Balfour to the top of the Underworld’s most wanted list. This first entry in H. P. Mallory’s Jolie Wilkins series is a titillating adventure that is nearly impossible to stop listening to.

A self-deprecating witch with the unique ability to reanimate the dead.
A dangerously handsome warlock torn between being her boss and her would-be lover.
A six hundred year old English vampire with his own agenda; one that includes an appetite for witches.
The Underworld in a state of chaos.
Let the games begin.

Life isn’t bad for psychic Jolie Wilkins. True, she doesn’t have a love life to speak of, but she has a cute house in the suburbs of Los Angeles, a cat, and a quirky best friend.

Enter Rand Balfour, a sinfully attractive warlock who insists she’s a witch and who just might turn her life upside down. Rand hires her to help him solve a mystery regarding the death of his client who also happens to be a ghost. Jolie not only uncovers the cause of the ghost’s demise but, in the process, she brings him back to life!

Word of Jolie’s incredible ability to bring back the dead spreads like wildfire, putting her at the top of the Underworld’s most wanted list. Consequently, she finds herself at the center of a custody battle between a villainous witch, a dangerous but oh-so-sexy vampire, and her warlock boss, Rand.

What listeners say about Fire Burn and Cauldron Bubble

There should be a 'too bad to finish' page

What would have made Fire Burn and Cauldron Bubble better?

A main character without the IQ of a lettuce

What could H. P. Mallory have done to make this a more enjoyable book for you?

Not telling us EVERYTHING the lettuce is thinking about ALL the time, and then developing a decent plot around less-lettuce-like entities.

Who might you have cast as narrator instead of Allyson Ryan?

She has poor material... so who knows

Anger!!! I spent my money on this!

Don't bother. There are way more creatively and intelligently written books which are very similar.

This protagonist has to be the dumbest witch ever!

She keeps forgetting she's a witch. She can conjure clothes from the air instantly but can't seem to realize she could conjure a weapon any time. Every guy in the story is after her but she refuses to give in to any advances despite her apparently rampant libido. I only finished the book because I was driving and didn't want to pull over. The blurb made it sound like the narrator was famously good but I just found her performance too anguished all the time very forced. Skip this one even if you are desperate.

What disappointed you about Fire Burn and Cauldron Bubble?

Story sounded like it was written by a sexually precocious teen-aged girl. It's one of the few books I couldn't finish. I don't usually write reviews, but this one is bad enough I feel like I need to warn people off.

Would you ever listen to anything by H. P. Mallory again?

What character would you cut from Fire Burn and Cauldron Bubble?

If you want to read some GOOD witchy books, try Dresden Files by Jim Butcher, The Hollows series by Kim Harrison, Iron Druid Chronicles by Kevin Hearn (has witches in it), and Secondhand Spirits series by Juliet Blackwell.

Great potential but too much tedium

I wanted to like this book but found Jolie to be tiresome and irritating and found the book weighed down with WAY too much tedious details/dialogue that didn’t actually advance the story. I never connected with Jolie and lost patience with her constant naïveté no matter how many situations she experienced which should’ve begun to build her savvy. I also found her interactions with Trent and Sinjin to be contrived. I understood what the author was trying to do but I didn’t feel it was executed well so it just came across as awkward to me. As for the performance I don’t know why Ms Ryan thought a husky delivery was the same as a British accent but I found her Rand and Sinjin voices incredibly annoying because they were basically the same husky sounding voice that was supposed to be British but was decidedly not. All in all I slogged through to the end of the book and while I’m curious to see how the story ends, I’m not interested enough to slog through another 12 hrs of an annoying Jolie (an even more annoying Krista) and a really bad attempt at British accents.

The worst narrator ever

I absolutely love this author. I’ve read her Dulcie O’Neal series and couldn’t get enough. I saw this series was included with the romance package and was so excited. Until I heard the narrator. She’s horrible. I can’t finish it. I tried really hard. I got where I could tolerate the main character. And Bram isn’t bad but he’s supposed to have an English accent. It’s far from it. The best friend is so bad voice wise that I wish someone would stab her in the eye. That was the last straw for me. Why would such a good author cheat us with such bad quality for a narrator? I am so glad I didn’t purchase this one. I’m sorry I wasted time on trying to listen. As far as the story, it is wonderful of course. I’ll be reading this one instead of listening to a high pitched sing song voice talking to me slow and like I’m a child. I had to turn the speed up on my audible. It helped some but not enough.

The love store is frustrating but honestly the female lead is annoying in her weakness and stupid lines. I want to enjoy the fantasy story line but it seems to be a bunch of sexual frustration and weak love story triangle blah.

Jolie Wilkins -- someone I'd never want to meet.

I bought this audiobook after listening to a free excerpt of chapter one. It sounded entertaining and I had fairly high hopes. Boy, was I misled. Nearing the end now and it just keeps getting worse. Jolie Wilkins, protagonist and witch, is supposed to be beautiful, intelligent, perfect in every way, blah blah. Major fail -- she repeats herself, makes stupid jokes (and then explains them!), and uses crass language. Plus, she claims to be in love with the male protagonist, while salivating after every other man she meets, whether friend, enemy, or just random character passing through. Awful -- an embarrassment to women everywhere. Why aren't there any decent female leads in chick lit? I'd like some entertainment with a brain, please!

I had mixed feelings about the narrator. She had a pleasant voice and read fluently, but her accents were blatantly inauthentic. The English accent sounded like an American trying too hard, and the Scottish accent was just bad. "Lass" is made to sound like "la-ahs", among other irritations.

I just wanted a cute, moderately intelligent book. Instead I got a teenager's wet dream. Oh, HP Mallory, is this really the best you could do?

Where does Fire Burn and Cauldron Bubble rank among all the audiobooks you’ve listened to so far?

What other book might you compare Fire Burn and Cauldron Bubble to and why?

Which character – as performed by Allyson Ryan – was your favorite?

Signgion (Not sure how to spell it, sounds like Sin jian)

One reader said this book was boring. They could not have been more wrong!

I am looking for a new series and was disappointed with the narration or maybe just the writer.
It did not flow smoothly and I was not overly impressed by the language used.
Just because I read, and like bit of romance with my fantasy does not make me an idiot.

Plot was ok, however as a whole, it failed to deliver.
The new new series I am looking for unfortunately is not this one.

Love the book, hate the narration

I have read the entire series multiple times and I love it. I cannot stand the Audible version. The narrators voice is awful. It sounded like a kindergarten teacher trying to keep a classroom full of kids entertained with the random high pitches. Completely wrong choice for this series. If it was narrated by someone else I would’ve enjoyed it. I couldn’t even get through the first two chapters.

very good narrator. Did a great job! Story was quite enjoyable and fast paced. Likable characters and good beginning to the series. looking forward to the next.

Bad romance forced on the reader

From the very first chapter it was evident that the author was trying to insert romance into the book in a most unnatural way. It interrupted the flow of dialogue and seemed completely out of place with the narration being entirely 1st person by the main character with extremely frequent "ooh he's hot" digressions which seemed forced and made the storytelling slow and disjointed. The romance was entirely unnecessary, yet ended up being the focus of every new chapter.
For readers of supernatural fantasy the works of L K Hamilton are likely familiar, to this story her later works which focused on bad romance with minimal plot would be reminiscent. The main character has multiple besotted males of various species constantly complementing her for little apparent reason, who constantly tell her how amazing she is and how they must have her, while the plot is short, poorly told and unremarkable. This seems like a trashy, light, plotless, holiday-read, fantasy romance aimed at less intelligent readers.

The narrator reads every sentence as if it has a ! at the end of it, her voice making each sentence! an exclamation! like oh my gawd! Which gets old very quickly. Several characters were supposed to have English accents...needing quite a bit of work

There are more books in the series but I have no compulsion to explore them,the author has completely put me off!

This book was a real struggle. I just can't warm to the main character. She annoys me. I started listening months ago, left it, then decided to hear the rest. It was not worth the wait.