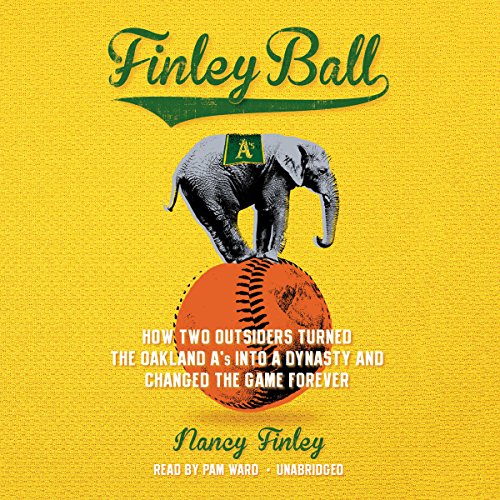 When Charlie Finley bought the A's in 1960, he was an outsider to the game - an insurance businessman with a larger-than-life personality. He brought his cousin, Carl, on as his right-hand man, moved the team from Kansas City to Oakland, and pioneered a new way to put together a winning team. With legendary players like Reggie Jackson, Catfish Hunter, and Vida Blue, the Finleys' Oakland A's won three straight World Series and riveted the nation.

Now Carl Finley's daughter, Nancy, reveals the whole story behind her family's winning legacy - how her father and uncle developed their scouting strategy, why they employed odd gimmicks like orange baseballs and "mustache bonuses", and how the success of the '70s Oakland A's changed the game of baseball.

What listeners say about Finley Ball

A Unique Perspective of a Unique Baseball Owner

Although this isn't what one would call a 'definitive biography' about the outsider baseball owner of the Kansas City Athletics, it is a descriptive and inside account about a man who definitively changed baseball and another who silently facilitated it.

I gave an overall rating of 5 stars because I've been an Oakland A's fan since 1988 when Orel Hershiser and Kirk Gibson broke my heart by defeating my newly chosen team in the World Series; redemption would come a year later. This book lacks many details and counter points that one would expect from a biography, but the author readily admits that she only wrote this book because, "she was the only one left who could." (i.e., she's the only one still alive with that inside perspective to counter the voracious Finley haters who've tarnished his legacy.

If you're an A's fan, then you must read this book. Beware, you'll hate the Yankees more than ever. If you're a baseball fan then this book is a delicious part of baseball history that shouldn't be forgotten.

How the Oakland A's Dynasty Rose From Ashes

Good take on the era.

I really liked this book. Yes, it may be a bit "Finley Sided", but all the other books have been of the opinions of those writers. It was good to read her take on it.