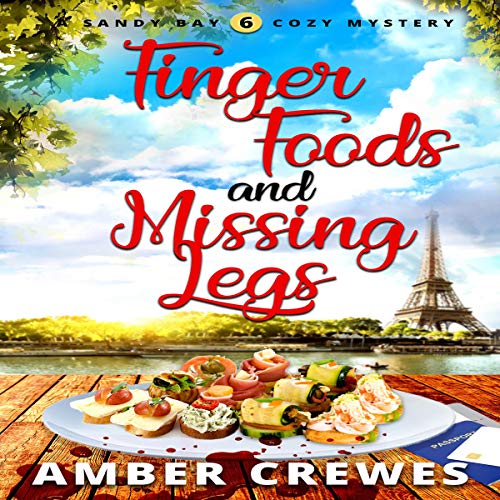 Meghan Truman is ecstatic when she discovers she’s won an all-expense paid trip to Paris for a food and baking convention. She’s never been to Europe and is looking forward to the sights, smells and people.

Her trip takes a very sour turn when one of the chief conference speakers is reported missing and subsequently found dead in her hotel room. Meghan is shocked when she’s informed she has been identified as a person of interest who the police want to speak to.

With her European trip in danger of turning into her worst nightmare, she must quickly identify who had the most to gain from the victim’s demise and absolve herself of any link to the murder before her hopes of landing a lucrative deal with an interested investor fades into nothing in the city of love.

Book six in the Sandy Bay Cozy Mystery series, which can be listened to quickly! Perfect for a lunchtime listen or on a commute to/from work. If you want to enjoy a quick light-hearted listen, with an amateur female sleuth, mouth-watering culinary desserts, and a gripping murder mystery, then you'll love Meghan Truman and all the quirky characters in Sandy Bay.

No cliffhanger, swearing, or graphic scenes!

What listeners say about Finger Foods and Missing Legs

Finger Foods and Missing Legs (Sandy Bay Cozy Mystery Book 6), my seventh read from author Amber Crewes. Well-written & enjoyable. another cute, clean cozy mystery. This time Meghan Truman is on the road in Paris, France. I was given an Audible copy of this book & am voluntarily reviewing it. I was impressed and enjoyed the vocal variety & inflections of narrator Elena Marino who has become the voice for Meghan Truman. I look forward to reading more in this series & from this author as I get them. (RIP Marley January 20, 2014 - July 24, 2018).

Book 6 in the Sandy Bay Coz Mystery series was a great addition!

This book and series are quick fun reads. Meghan owns a bakery in Sandy Bay and wins a trip to Paris for a Food & Baking Convention. She runs into trouble when one of the speakers is missing and turns up dead and Meghan is a person of interest. She needs to find the killer and remove herself from the suspect list. Kept me guessing! Enjoyable!

It's All in the Voice

Right off, I need to confess that I don't care for female narrators or DJ's. It's the way my ears translate the pitch and volume.

But, voice actor Elana Marino has made me so happy that I tried this audiobook. She is incredibly talented. Her accents were an absolute delight, and when she was narrating the storyline, her smooth pitch and tempo made for enjoyable listening. Bravo!

Although this is a short story, Amber Crews was quite cunning in sneaking in so many feels. Our main character is a baker from a small town. Through a series of events, she ends up in some wacky situations.

This is a fun and quick read, leaving you wanting just a little bit more. We get a sneak peek of the next volume. 😉