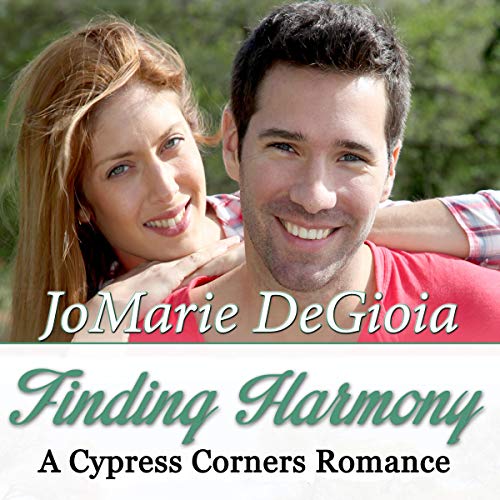 A country girl committed to nature. A city guy with his eye on the bottom line. A battle of wills...a battle for balance And a love that can tip the scales

Rick Chapman is climbing to the top rung of his father's corporate ladder. Fulfilling Chapman Financial's contract at Cypress Corners, Florida will finally prove his value to the company. And to his father. But one endangered weed, and the pretty plant girl trying to save it, could really screw up his plans.

Harmony Brooks loves her job as a plant conservationist at Cypress Corners, and the money she earns allows her to make up for a former boyfriend's betrayal. He not only stole her parents' money, he stole her heart. And that's something she won't ever risk again. But opposites attract, not that she or Rick ever expected to fall in love. Can Harmony prove to Rick that he's worth so much more than his father's approval? Or is Rick so blind he can't see that loving Harmony is worth losing what he's wanted for so long?

What listeners say about Finding Harmony

I'm not sure if it was the mood I was in or not, but this started a little slow for me. Luckily it picked up pretty quickly and I found myself engrossed in the book. Wendy Rich Stanton has one of those voices that pulls you into a story and keeps you there. She just has a way of capturing the essence of the characters and making you feel like you know them.
I really enjoyed Harmony, our main character. She just had this mellow personality that had no fuss and pomp. And, I even liked Rick. He was conflicted but honest. I loved the way their story sort of unfolded into this sweet, loving connection. I'm looking forward to enjoying the rest of this series. I'd really like to know what happens with Ricks siblings and if his detached father ever gets a clue. I received this as an ARC and now want to continue with the series.

Nope, it is a good book just the way it is.

Would you be willing to try another book from JoMarie DeGioia? Why or why not?

This is a heart warming book, I fell in love with all the characters and i will continue the series for sure.

Where does Finding Harmony rank among all the audiobooks you’ve listened to so far?

A charming and thought provoking story.. I like it and am glad I listened to it.

I liked that she felt so strongly about her job and that she wasn't going to let her feelings for Rick influence her.

Which character – as performed by Wendy Rich Stetson – was your favorite?

I thought she did a wonderful job with all the charactors

Great escape on a wintry day

A charming and thought provoking story that takes place in an idyllic setting. The narrator Wendy Rich Stetson did a good job, her voice is clear and she was able to differentiate the cast of characters very well. I enjoyed the tone of her voice and always knew which character was speaking. I was very drawn into the story, it has a positive message woven into a passionate love story.

Cypress Corners starts out as your hometown story, a little slow at first, but once you begin to get to know the people who live there, you are thrown into the story full force. This first in the series introduces us to Harmony, a conservationist who finds an endangered plant growing in Cypress Corners near where there will be some development. Rick, the overseer of the project and man who needs to keep the investors happy is not too thrilled with this find. The two meet and conflict, but the chemistry is evident right away. I loved Harmony, she was a very matter of fact woman, able to stand on her own and was clear with her life path. I found Rick likable too, and as the book went on and you found out more about his past, it was evident the reasons why he reacted certain ways. The cast of background characters are quirky and fun. Harmony's parents, especially her mom brought a smile to my face each time she was in a scene. Also met Rick's brother and mention of his sister, so am looking forward to seeing their stories come out. Their family is definitely dysfunctional and it's always interesting to see how they pull themselves out of predicament.

My first Wendy Rich Stetson narration, and now I am wondering why I haven't stumbled upon her sooner. She has a rich, melodic voice that pulls you into the story. Each character is easily discernible and her cadence is perfect for this hometown series. I am looking forward to the next one!

See how opposites do attract

Would you listen to Finding Harmony again? Why?

I love a great story when opposite personalities find themselves falling in love. Rick Chapman is pure city. While Harmony Brooks is pure country. I love the interaction between these two.

My favorite part in the book is when Rick realizes he will never please his father, and tells him to keep his job!

The after effects of Harmony's meeting with Rick's father. I am not going to give any spoilers, but Rick needs to ask before he jumps to conclusions.

This was an amazing story of two people falling in love. The author and narrator really brings out the emotions in the writing and in the telling. I need to thank Wendy Stetson with the gift copy of this audio book for my honest opinion. I really enjoyed listening to this book. Kudos to the author JoMarie DeGioia and the narrator Wendy Stetson. Great job!!! I look forward to reading/listening to future books by these two in the future.

The book was good. It was a light story. The narration by Wendy Rich Stetson was very good.

Harmony and Rick have a lot to overcome before either of them can find the happiness they both deserve. This was a fun and light story. The narration really brought it to life.

The Developer And The Conservationist?

If you could sum up Finding Harmony in three words, what would they be?

What other book might you compare Finding Harmony to and why?

I do not compare books to each other. Each book series is its own entity.

Which character – as performed by Wendy Rich Stetson – was your favorite?

I loved Harmony! She was so conflicted and yet she let herself hope :) Wendy's performance showcased her ever shifting emotions as well as her resolve to not be the too trusting girl she used to be. She was strong and yet hopeful as well as true to herself.

This series must be listened to (or read) in order. This is the first book. I can't wait to listen to Taming Jake!

Harmony is a conservationist who works for Cypress Corners to make sure no nature is harmed by new development. It is her job to keep the rare plants safe from developers who would likely just destroy them to meet their almighty deadlines and keep their high profits flowing. Finding the rare buckwheat has been proof that she deserves her job. Now she just has to convince the handsome developer Rick he has to listen to her. Will they learn to work together? Or will they spend all their time fighting over what is more important, nature or the bottom line? Can she make him see reason? Why does he spark her interest when noone else has since college? Will she ever get over the past?


Rick has been working his whole life to gain his father's approval. He needs to keep his promise to his dead mother. Becoming heir apparent and the second in command at his father's empire is all that matters. He can't fail his mother's memory or his two siblings. No matter the price. He has no time for romance and he doesn't want it anyway! He will be happy when he FINALLY has his rightful place in the company. Doesn't he? Why is he so drawn to the one woman who can destroy his dreams? Could he be interested in more than a quick distraction?


***This chicklit romance series is suitable for adult readers who enjoy hopeful stories with plenty of steam and a dash of ecofriendly morals to go with the requisite HEA :)