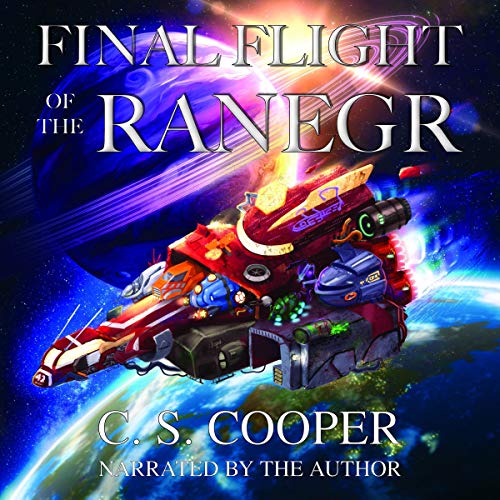 Final Flight of the Ranegr

A deepening crisis aboard a deep-space colonisation vessel has forced most of its crew to evacuate to the nearest planet.

During the evacuation, a ship, carrying three young friends to safety, malfunctions and strands them in interstellar space.

It's not long before the Ranegr - a drifting ship of outlaws - salvages their derelict pod.

Put to work in the reactor core by a captain with conquest on his mind, and stalked by bizarre creatures in the shadows, the children's bid to escape and return home is just one thread in a web of ambition and clashing desires, bringing them ever nearer to an ancient mystery lurking in the cosmos.

What listeners say about Final Flight of the Ranegr

Interesting concepts and aliens. A little too much surface level character interactions but expected as the lead characters are kids. found this book watching Timcastirl when he read your superchat . Enjoyed the story

This book is great!
My favorite part is the author's Narration. C.S. Really reads his book as he wanted the reader to hear it without a question. I felt like I was transported into the world of the book and I was one of the kids along for the adventure. C.S. Narration also gave me the feeling that I was a 12-year-old boy reading his first Scifi Novel. C.S. Did a great job with the narration.

The storyline was great also. It is full of challenges for the characters and deeply resonating moments too that will touch your heart. This book is accessible to both casual sci-fi readers and Sci-fi fans and I would recommend it to all friends who like nonfiction.