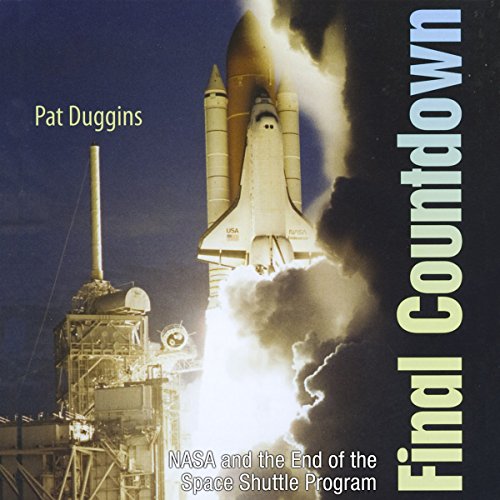 Final Countdown: NASA and the End of the Space Shuttle Program

The Space Shuttle was once the cornerstone of the U.S. space program. However, each new flight brought us one step closer to the retirement of the shuttle in 2010. Final Countdown is the riveting history of NASA's Space Shuttle program, its missions, and its demise. It also examines the plans and early development of the space agency's next major effort: the Orion Crew Exploration Capsule.

Journalist Pat Duggins, National Public Radio's resident "space expert", chronicles the planning stages of the shuttle program in the early 1970s, the thrill of the first flight in 1981, construction of the International Space Station in the 1990s, and the decision in the early 2000s to shut the program down.

As a rookie reporter visiting the Kennedy Space Center hangar to view the Challenger wreckage, Duggins was in a unique position to offer a poignant eyewitness account of NASA's first shuttle disaster. In Final Countdown, he recounts the agency's struggle to rebound after the Challenger and Columbia tragedies, and explores how politics, scientific entrepreneurship, and the human drive for exploration have impacted the program in sometimes unexpected ways.

Duggins has covered 86 shuttle missions, and his 20-year working relationship with NASA has given him unprecedented access to personnel. Many spoke openly and frankly with him, including veteran astronaut John Young, who discusses the travails to get the shuttle program off the ground. Young's crewmate, astronaut Bob Crippen, reveals the frustration and loss he felt when his first opportunity to go into space on the first planned space station was taken away.

Final Countdown is a story of lost dreams, new hopes, and the ongoing conquest of space.

" Final Countdownartfully merges excellent reporting with great writing to chronicle the highs and lows of the Space Shuttle program, along with rare astronaut anecdotes about what it's really like to fly to space and back." ( Aviation Week & Space Technology)
" Final Countdownprovides a very personal look at America's manned space program from a veteran reporter who has covered the shuttle's ups and downs for more than 20 years. Duggins brings an insider's perspective to a complex topic." (Bill Harwood, CBS Space Correspondent)
"Pat Duggins knows of what he writes. Final Countdown is a solid read." (Jay Barbree, NBC's veteran space correspondent)

What listeners say about Final Countdown: NASA and the End of the Space Shuttle Program

A fantastic story and very well delivered. a good overall story delivered from start to finish of the space shuttle program

Great narration by the author

Final Countdown provides a great insight into the spectacular and sometimes trouble Space Shuttle program showing the chinks in NASA's armor during this period. However the author always shows how the space shuttle "a spacecraft without a mission" was still an amazing feat and all of its accomplishments. The author who also narrates the audio book isn't deadpan and shows the emotion that he wrote in the book making it a great listening experience.

A great general overview, with lots of nuts and bolts for the technically inclined.
We now know just how dangerous the Shuttle was,
it must have felt like driving a 17,000 mph Mack truck,
with bad steering, a stuck gas pedal, and no brakes.

End of the Shuttle

This is a short book that makes a nice break from reading extremely long books. I have been a fan of the space program since it started. I try to read as much about NASA as I can, thus I grabbed this book to read. Duggins provides us with the reasons for the end of the shuttle program. As well, it covers major milestones for the program. It is neither a concise history nor a program review. Rather, Duggins book takes the reader on a human perspective. It is, the social issues come more to the fro than those of a technical nature.

The author’s fondness for the space industry comes through in the book. Duggins acknowledges the shuttles shortcomings, he also lauds it successes. Duggins discusses the dramatic influences of politics up on the space shuttle program. The author does not cover the effect of closing the shuttle program on the key areas such as Florida’s Space Coast, The Johnson Space Center or California space area or about the thousands of workers who will lose their jobs.

Pat Duggins is a senior news analyst at WMFE in Central Florida. He has covered more than 85 shuttle launches. Pat Duggins does his own narration.

Concise analysis of the decline of the Shuttle mis

Would you consider the audio edition of Final Countdown: NASA and the End of the Space Shuttle Program to be better than the print version?

Have you listened to any of Pat Duggins’s other performances before? How does this one compare?

Precisely written and perfectly read. A clear and matter-of-fact discussion of the issues confronting the Space Shuttle's development, missions and ultimate demise.

Four out of five

Very factual, lots of names & references which are difficult to follow. Read very fast which often requires skip back to repeat. Full of information. Well written & recommended for every avid space fan.