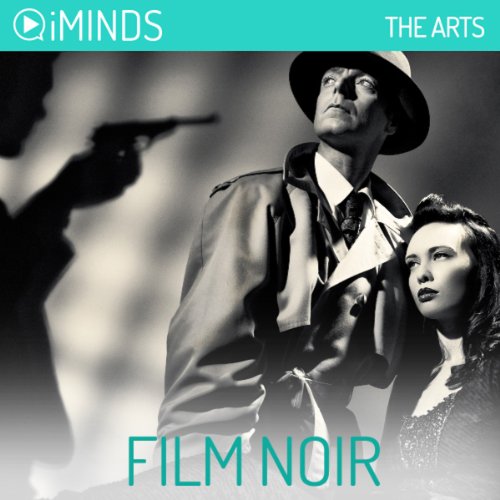 iMinds explores the history of film noir, whose popularity reached its peak in the 1940s and 1950s. Literally meaning "black film", film noir is noted for its dark aesthetic, themes, and situations. Luca James Lee gives a well-defined performance, clearly demonstrating how the circumstances surrounding American culture gave birth to the predominance of film noir; principally, the genre took its cues from detective fiction of the 1920s and reacted to the Depression and postwar attitudes to showcase a more cynical point of view. Listeners also receive great recommendations on some film noir classics like Double Indemnity and Touch of Evil.

Learn about Film Noir with iMinds insightful audio knowledge series.If you’re watching a movie where a world-weary detective is having trouble with a “dame” or a “broad”, and cigarette smoke is wafting through the scene – you’re probably appreciating a bit of “Film Noir”.

Film Noir literally means black film referring to both the look and the attitude of these movies. Classic Film Noir movies were produced between 1940 and 1958. This film making style emerged in the United States as the Second World War raged and the Great Depression was only recent history.

During the Depression Hollywood busily made films that kept audiences happy. For most of the War many Hollywood movies also served as propaganda. Then the soldiers came home and had to adjust back to civilian life. Film Noir was a popular cultural reaction to the desperation of the Depression and the annihilation of the War, coupled with a growing fear of nuclear holocaust during the 1950’s. Film Noir was disillusionment creeping onto the silver screen.

iMinds is the knowledge solution for the information age cutting through the white noise to give you quick, accurate knowledge .. Perfect your dinner party conversation, impress your boss - an excellent way to discover topics of interest for the future.

What listeners say about Film Noir

What would have made Film Noir better?

The blurb stated that it had recommendations of films but it barely mentioned any except as general lists. What would've been better is if when talking about lighting a few good film examples were mentioned, when talking about femme fatales it recommended more than just Gilda. I know it's only eight minutes long but it was so basic that the listener had little to take away from it, what films to watch, further reading etc., and there was a bit of repetition that really has no place in such a short piece.