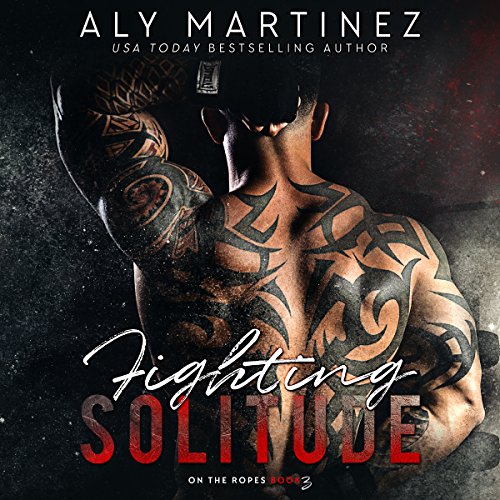 I was born a fighter. Abandoned by my parents, I spent my life forging my own path - one guided by my fists and paved with pain. Untouchable in the ring, I destroyed everyone who faced me, but that's where my victories ended. Outside the ropes, I repeatedly failed the few people who loved me. Including my best friend, Liv James - the one person I'd die to protect. Even though I didn't deserve her, Liv never stopped believing in me. Never gave up. Never let go. After all, she understood what I'd lost, because she'd lost it too. Liv was everything to me, but she was never truly mine. That was going to change. I lost my first love, but I refused to lose my soulmate. Now, I'm on the ropes during the toughest battles of my life. Fighting to be the man she deserves. Fighting the solitude of our pasts. Fighting for her.

Didn’t work for me

Although I do usually love Aly Martinez’s books, this one just missed the mark for me. I didn’t really connect with Liv and Quarry as a couple. And their story just dragged on and on and after awhile, it felt like the same issues kept coming up. I couldn’t wait for it to end. This won’t stop me from reading future books by Ms. Martinez tho. This one just didn’t work for me.

Another Page brother does well!

I think that Aly Martinez is an underrated author. I constantly search to find new work from her because she writes real stories without the characters becoming caricatures, where the good guys are too good and the bad guys are all evil.
She doesn't write easy stories, she writes stories you have to listen to carefully because of her attention to detail and the shades of grey that make up a person's existence. She's an automatic purchase for me, she brings stories to life realistically and entertainingly.

This series is awesome

The whole series is great! I listened each of the three books back-to-back. It has all the elements that keep you riveted. The author shows that even with different abilities (deafness, paralysis) dreams can and do come true. Narrators are terrific. They are new narrators to me.

I gave this review without anything in return. Definitely worth a credit.

I feel so connected to the Page family!

I loved this book and the entire series and whole families stories- Brett and Jessie, Caleb and Emma, Leo and Sarah.. and then Till and Eliza, Flint and Ash, and finally Quarry and Liv. I dont want to say goodbye to this family and these books! my ONLY complaint is that I dislike that they have the same narrators for each book- I felt like that voice belonged to Eliza and there should be separate narrators for Ash and Liv. overall, great series and I will continue to read Aly Martinez books for awhile!

Great ending to a great series

This one was a little slower to me than the first two in the series. But still a great read! I have loved all three of the Paige brothers and their journeys to love and happiness. All three books are emotional and heartfelt. This one had me crying at the end to see all three brothers get their HEA. Great series!

i’ve been an audible member for over 10 years and don’t write reviews but this series was so great I just had to share!! I started listening to this book at 10 PM and was so hooked within an hour that I stayed up all night listening. The performances were great, the story kept me hooked, the character development was robust, it made me laugh, it made me cry and overall give me a sense of joy that I listened to a fantastic book. Enjoy ~

absolutely loved all three story lines in these books. These guys are adorable. The writer has an awesome sense of humor! Unfortunately this book caused sleepless night for me due to not being able to get the story out of my head!!

Not my favorite, of the series!

I loved most of this third book, of the series. The only exception was the way that the author made Liv feel guilty about her relationship with Q. I also didn’t think that the way Liv refused to forgive Q for his past wrong doing, fit her personality. Otherwise, I loved the book, even though it made me cry, a lot. I did also hate that I had to say goodbye to these characters, they all really became dear to me. This is definitely not a trilogy you want to miss.
- V from Kansas

Nice finish to the trilogy

Narration was awesome. Thank goodness for their addition to make the story work.
I have loved watching the development of the Page boys to men in this series. This one wasn't as strong as the other two though.
The story lent too much power to Quarry's love for Mia through Liv's character. I got that there was a history amongst the three , but for god's sakes, give it a rest. Liv just got ridiculous with the hand wringing and I nearly DNF. Too much time and energy wasted on that s#%^$. Spoiler alert:
The best scene - bar none- was the final title boxing scene with all of the bros in the ring. Totally awesome!!! I cried.

This is a such as great trilogy!! Loved all of the "On the Ropes" books. I appreciated all the books had in depth characters with challenges and struggles.

I can't wait to check out more of Aly Martinez's books!

This was a good ending to the series. enjoyed all of them, still not a fan of the female narrator. Haven't read Leo and Sara's story yet.