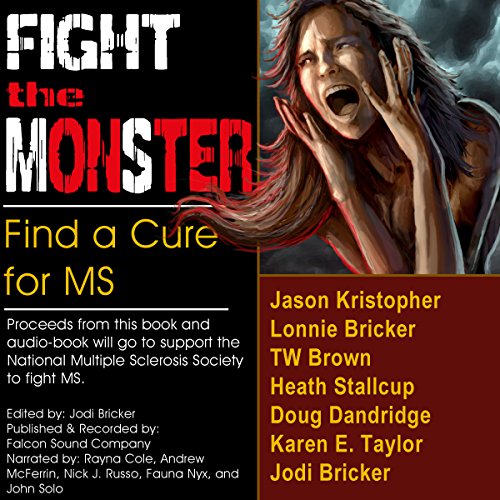 These 15 short tales of terror were contributed by eight different authors in order to fight the monster that is Multiple Sclerosis. Proceeds from the sale of this book support finding a cure for MS.

A ruthless killer shows a real hunger for fame. Struggling through the wilderness, an infected man tries to lead zombies away from his family. Hell hath no fury like a woman murdered. Civil War soldiers discover the secrets of a Southern swamp. Can Christmas magic survive the zombie apocalypse? A ship of the dead hunts the living on the high seas. Dinner in a diner takes on divine import. A 200-year-old vampire has a little surprise waiting for his next victim. A search for treasure makes for a really long night. A fighter pilot is shot down over very unfriendly territory. A young man makes a tempting discovery that changes everything. A little boy tries to save his dog and the unbelievable happens. Viking warriors are shipwrecked on a not-so-deserted island. A workman in 19th century England gets seriously steamed. Co-workers develop an unhealthy long-term relationship. A family goes shopping for a new pet.

What listeners say about Fight the MonSter

In regards to all the stories here

I will skip talking about my own contributions and leave that to other reviewers, but I will say that the other tales in this little tome are VERY worth the time, and not only that, but all proceeds go to an excellent cause. If you are wanting "feel good" horror, skip the introductory tale. That story alone was worth this book and perhaps the most chilling tale I have read.

The audio version is a highlight reel of excellent talent and really displays the amazing narrators that make up the Falcon Sound team.

These are not good stories.

I enjoyed maybe 1 or 2 of the short (very) short stories. Very rare I rate a book this low but for the price it was not worth it. I listened to this book and the audio was good.

It's Not Just Zombies!

One could say I have a horror of Horror; I certainly never go to horror movies and generally will not pick up the latest Stephen King for fear of nightmares. However, this particular anthology contains at least 15 short stories which, despite the gruesome topics, generally are brief enough that my mind could overcome the matter (and some were quite funny). Almost all are terrifically well written and exceptionally narrated. (And any I might not have liked will probably be your favorites so I can only speak for myself.) Given the variety of authors and subject matter (okay, a LOT of zombies! but lots of other stuff, too, like angels, demons, vampires, and even a few extraordinary human beings) and the multiple narrators, you are in for a marvelous set of adventures. And did I mention this is all being done to benefit MS research? Do well (enjoy reading/listening) and do good!