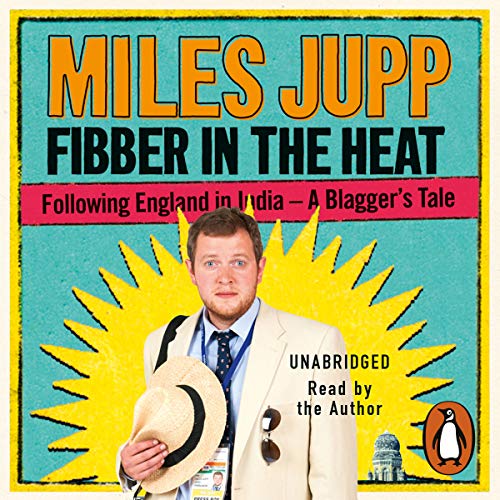 Fibber in the Heat

Fibber in the Heat

Fanatical about cricket since he was a boy, Miles Jupp would do anything to see his heroes play. But perhaps deciding to bluff his way into the press corps during England's Test series in India wasn't his best idea. By claiming to be the cricket correspondent for BBC Scotland and getting a job with the (Welsh) Western Mail, Miles lands the press pass that will surely be the ticket to his dreams.

Soon, he finds himself in cricket heaven - drinking with David Gower and Beefy, sharing bar room banter with Nasser Hussain, and swapping diarrhea stories with the Test Match Special team. Amazing! But struggling in the heat under the burden of his own fibs, reality soon catches up with Miles as - like a cricket-obsessed Boot from Evelyn Waugh's Scoop - he bumbles from one disaster to the next.

A joyous, charming, yet cautionary tale, Fibber in the Heat is for anyone who's ever dreamt about doing nothing but watching cricket all day long.

What listeners say about Fibber in the Heat

A wonderful story of a Cricket fan

This is a great read from Mr. M Jupp (Reference from the book) regarding how he attended a tour of India. This is a great listen for Cricket fans and almost to anyone who wanted to work as a journalist.
Miles was funny and had a great way of presenting the story and did not miss the details about the Cricket.

I picked this up on a whim, and didn't regret. Cricket based books can be a real bore filled with pointless statistics, or self-glorifying autobiographies. This one presents an interesting view on the India-England test series, as presented from a non-journalist POV. While there were situations that the author might have been tempted to write condescendingly, I am glad he didnt and instead presents a balanced, neutral view. Worth a read if you are a cricket fan.

Bailed out after 2 chapters -- nothin' happening

A real voice actor would have done better.

I gave it a good try, but after 2 chapters with no interesting characters developed and very little plot development, I couldn't go on.

It's Just Not Cricket!

I know absolutely nothing about cricket and wouldn't have read this as a book but I adore Miles Jupp so I wanted to hear this as he is reading it himself.
It is more than just a cricket book- it is a hilarious listen as he goes through his love of the game and the journey, both actual and spiritual, he takes to what he thinks is going to be his dream job.
An absolute hoot!

This started life as a stage show that was hugely enjoyable and has now been extended to full length book. A must for both fans of cricket and for those who are ambivalent, it mixes humour and pathos as it follows Miles Jupp's attempts to pass himself off as a cricket journalist on England's tour of India through to his final realisation of the reality of his love for the game. I saw the show three times; this is a permanent and extended reminder of those, one one that can be listened to again and again.

A good listen for a Cricket fan

Quite a good listen really into the goings on of someone trying to be a cricket journalist. Funny in places but definately worth getting if your a cricket fan!

Trials and Tribulations of a Wanna Be!

Essential reading for me as a cricket nut who writes a little. The narrative is a little like one of those dreams where you are wading through treacle whilst trying to run a 100m race. His efforts to obtain the coveted media passes were beset by such difficulties, that you could almost touch the frustration. A little dark in places when he becomes disillusioned with his attempts to join the ranks of cricket journalists but it is all handled with humour and a great deal of self-deprecation. I'm glad I listened

What made the experience of listening to Fibber in the Heat the most enjoyable?

Miles Jupp is the master of the understatement and this book about his attempts to become a cricket journalist on an England tour of India gives full rein to this talent.
I have no idea what a leg stump is or anything else to do with cricket but it really doesn't matter as his funny narrative carries you along sweeping across India in absurd yet totally believable situations.
I genuinely laughed out loud and as I listen to Audible whilst walking my dog I may have got myself something of a reputation in my village for being off my head. Small price to pay.
I am a huge fan of Miles Jupp, who I think is immensely talented.

Have you listened to any of Miles Jupp’s other performances? How does this one compare?

Yes, my absolute favourite Audible purchase, which I have listened to many times, is In and Out of the Kitchen. It is so well observed, I think it is brilliant.

I realise I may sound like a complete Miles Jupp anorak but if you haven't listened to him I urge you to download this, it will cheer you up.

Tragi-comic yarn of chasing a dream

A true story that is quite light hearted in its plot line, but stil manages to be touching. Miles Jupp, as can be expected from a comedian with a reputation with children, is very good in the funny parts. But what I found more interesting is the intorspection that he has to go through as the tour does not go well for him at all, in terms of logistical issues, all the time wresting with the reality known only to him that he is an imposter. The darker parts lend balance to the book and enhance it.

You don't have to know anything about cricket to enjoy this marvellous book by Miles Jupp - who is a joy to listen to. One marvels at his nerve in attempting to become a cricket commentator and his insight into the working lives of the journalists is enlightening for him, and the reader.
Would recommend this to anyone.

Would you consider the audio edition of Fibber in the Heat to be better than the print version?

yes, superb. I loved this book

What was one of the most memorable moments of Fibber in the Heat?

all of it, yes, superb. I loved this book

Have you listened to any of Miles Jupp’s other performances? How does this one compare?

no, yes, superb. I loved this book

From stage to page successfully

This narrative started life as a live show which was universally acclaimed - and deservedly so. Now Miles Jupp has expanded this into a full length account of his rather naive attempt to become a cricket journalist on England's tour of India. His performance of the book is every bit as wonderful as the show. Often hilarious, sometimes heart wrenching, always engaging we accompany him as he chases his dream through a whole string of obstacles through to it's - and his - ultimate realisation.

You don't need to be a cricket fan to enjoy this book. It's a great reminiscence on any level.