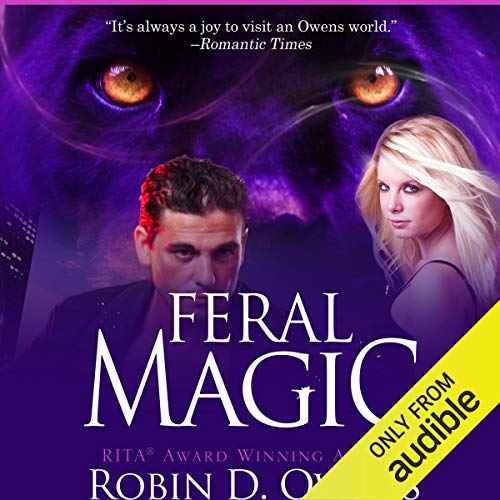 A blue moon rises, bringing with it magic and danger to a sleeping Denver.

Brandy Svensson mourns her lost soldier fiancee and struggles to move on. Her own near-death experience has brought her an odd "gift" - she has a telepathic connection with cats. She's coping with life's changes until the night she finds a lost jaguar cub, just the start of the greatest changes of all....

Dak, a warrior Pantherman, is alarmed when his baby nephew, the Chief of the klatch, vanishes. Dak must find the infant before his enemies do...or be branded a murderer and risk igniting warfare among the clans.

When the cub turns into a human baby, shock and confusion flood Brandy. And when a full-grown jaguar arrives to claim him, then transforms into a man, fascination sweeps through her. Dak's protective instincts are triggered by this lovely woman, and the certainty that he's followed by a killer.

Drawn together in their fight to protect the baby, Brandy and Dak confront the enemy and the final choice threatens. Will the feral magic they've discovered together save or doom them?

What listeners say about Feral Magic

What happens next? Listening to the ending and wondering where the remaining books are. I need more.

Brandy Svensson is dealing with life changes until she finds a baby panther and takes it home to help. Dak, a warrior Pantherman, is looking for his baby nephew that teleported/vanished from his pen and find the infant before his enemies do. Dak finds his nephew safe with Brandy but the enemies have found them also- I struggled with this audio. I found the narration was WAAAAAaaaayyyyy too slow and had to crank up the speed on my phone in order to keep my attention. I also found the story lacked in a number of places. If the baby teleported to another realm and found Brandy, how is it he didn't teleport again? I believe there was supposed to be suspense in the story but I just didn't feel it, at anytime.

Story great, narrator not so much.

I love the story. The narrator was awful! If I didn't know I would have thought they used google voice.