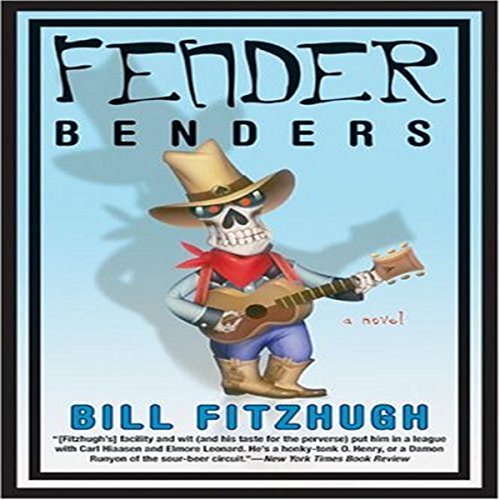 Depending on your point of view, Fender Benders is either a skewed look at the country music industry or a clear-eyed view of a damn screwy business. It's a Grand Old Opera complete with murder, treachery, greed, drugs, twangy music, a love triangle, and the best fried swimps you'll ever put in your mouth.

First off, some folks down South have taken to dropping like flies. One minute they have a headache, the next they have a date at the funeral home. Seems some lunatic is tampering with boxes of headache powder, lacing them with sodium fluoroacetate. It's a nasty death, but at least it's quick, and it makes you forget you had a headache.

Second, Eddie Long wants to move to Nashville and become a country music star, but right now he's stuck in Hinchcliff, Mississippi. Eddie's big break comes with a contract to tour the Mississippi casino circuit. While he's on the road, his wife dies, the victim of an apparent serial killer. The emotional turmoil of his wife's death causes Eddie to write the best song of his life. He takes it to Nashville, hooks up with a hoary management company, and launches his career.

Meanwhile, Jimmy Rogers is a freelance writer covering the Mississippi music scene. He loves writing and a girl named Megan. Jimmy decides early on that he is going to write Eddie's biography. But as he's researching Eddie's wife's murder, Jimmy comes to a surprising conclusion. He can't prove it, but publishing it might make his own career.

Megan is a smart, talented, and popular radio personality in a tiny market. But she wants a faster way to Easy Street. So she turns to Eddie. In Nashville.

Before it's all over, everybody's planning to make a killing one way or another - including the kind that has nothing to do with money. But, as frequently happens on Music Row, things don't always turn out as planned. Rip-roaring, with the author's trademark blend of withering insight, divine absurdity, and an outrageous cast of players, Fender Benders is a hilarious, action-packed, no-punches-pulled look at the music makers and fakers who would do literally anything for a hit record. Here is the irrepressible Bill Fitzhugh at his wildest and funniest. Betcha dolla!

"Sharp, sassy, read-in-one-sitting, laugh-out-loud literature." ( Publishers Weekly)
"Listeners will immediately recognize each character's voice as they follow this topsy-turvy story about who REALLY penned the song everyone loves. Most touching is Colby Elliott's rendition of a gorgeous spiritual at a heartbreaking funeral." ( AudioFile)
"Fitzhugh is a strange and deadly amalgam of screenwriter and comic novelist...in league with Carl Hiaasen and Elmore Leonard." ( The New York Times Book Review)

What listeners say about Fender Benders

So much enjoyed three of his other books; the two about the bug guy, and the one about the Second Coming, all wonderful. This one just fell flat for me. Perhaps I never made it through the build up, but if so, just to long to get started. Perhaps the subject matter...the South is hard to write about. ..we Southerners are hard to understand from the outside. Shame I really like this author's other books. But hey, even the greats wrote some bad ones along the way. I'll still try another one.