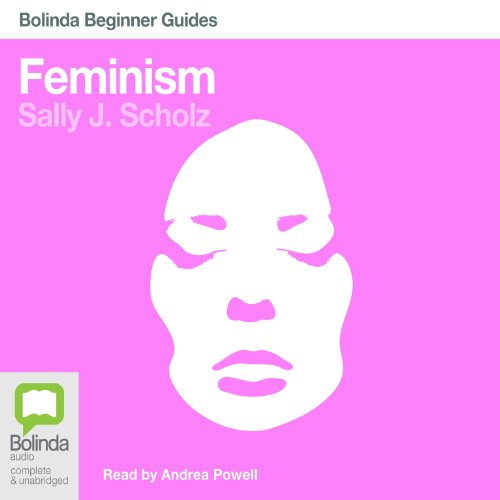 What is feminism, and what does it mean to be a feminist? Those are the questions that this concise and approachable introduction to feminist theory and methodology attempts to answer. Composed by Villanova University philosophy professor Sally Scholz, this audiobook looks at feminism through a number of different lenses to provide a nuanced overview of the topic. An authoritative narration from Andrea Powell lends weight to Scholz's words, making this audiobook a compelling listen for anybody with an interest in women's rights and the way those are expressed in feminist theory.

Feminism is arguably the most significant social movement of the last century and it is far from over. But what appears as a single, unified movement on behalf of women’s liberation is really a fascinating coalition of social and political causes, goals, and ideals.

By highlighting the themes that form the enduring nexuses between the three "waves", taking powerful examples from feminist campaigns, and tackling timely issues such as genocide and war rape, Scholtz invites us to join in with the lively debates and always germane challenges of feminism.

This book kept my attention throughout. It offers an informative and clear introduction to feminism as a diverse discipline and practice. It's balanced and articulate description of feminist practice and methodologies helped the maintain interest (as well as being highly informative): I found myself appreciating the similarities and differences of the many forms of feminism discussed. A great introduction. It is also extremely useful for those who feel they know the topic. The section on feminism and religion was useful me, in particular, because it helped me to think about ways to think about the intersection of feminism and religion in Postcolonial contexts, and it also offered me knew ways of speaking about key issues. A really valuable text.

I really loved the structure and witimg in this work. Its perfect for anyone who needs some basic feminism 101. However, the woman reading this thing should be unequivocally canceled. She is so bad that it almost makes one wonder if she was a plant for aome sprt of misogynistic conspiracy to ruin a book about feminism. So the content is great but take a shot of expresso before starting so you don't fall asleep. or better yet get a printed version and save yourself 6 months hassel.