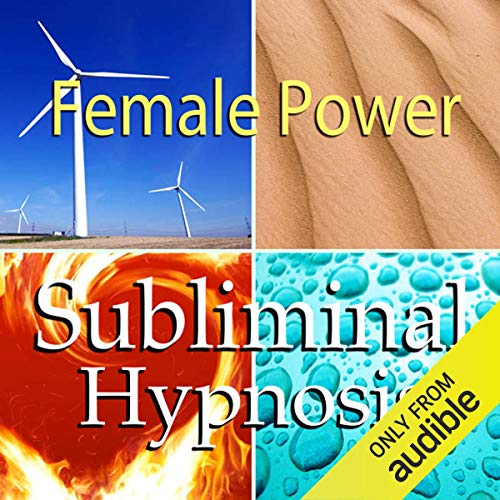 Embrace your inner goddess. Feel confident and sexy in who you are as a woman. Be comfortable and proud of your sensuality. Love yourself and embrace your womanhood!

This subliminal hypnosis program works for you on three different levels - positive affirmations will be spoken during your deepest state of open relaxation, low binaural beats that are almost imperceptible to the human ear work with your subconscious mind to anchor the positive affirmations to help you embrace your female power, and ancient Solfeggio tones encourage healing and wholeness with powerful harmonic frequencies. Along with seven different soothing sounds of nature, these three elements combined together are the triad of positive change that will propel you toward a better future.

Female Power Affirmations in this program are:

Instructions: There are no relaxation suggestions in this subliminal hypnosis program, so you can listen at any time of the day or night. You may listen to the entire program as a whole or select only specific nature sounds that you enjoy most - the positive affirmations will still be effective for change.

I really enjoy listening to the different sounds and nature.
I do feel more relaxed and calm.

I would warn them there is nothing to hear on these tracks but a bunch of sounds like a full blown fire crackling and roaring for 20 minutes,then an ocean breeze for 20 minutes and it continues with rainfall, a waterfall, a thunder shower, what sounds like whale calls in the ocean, and high winds. I did not hear one word spoken nor have I heard one musical note. I guess that's what they mean by subliminal: only my subconscious will hear it.

Would you ever listen to anything by Subliminal Hypnosis again?

I purchased 4 titles at one time and they all sound exactly the same. I guess the messages are all subliminal, as the title suggests, so we will see. I plan to give it a fair shot. Would I buy another title? If these seem to work then yes. There were many more that I was interested in

What did you learn from Female Power Subliminal Affirmations that you would use in your daily life?

I will come back and update later if there is anything to update. Right now after listening one time...nothing

I will come back and update my review in a few weeks. Right now I want to warn the buyer that the messages are subliminal and you will not hear any voices on here. I was shocked when I first listened because the description says there are tones, beats and hypnosis. I thought something was wrong so I listened to the other titles I purchased in this series and they sounded exactly the same. It makes me a bit nervous not being able to hear the messages they put on the tape. I mean suppose they mixed it up and sent me one that tells me I am superman instead of an empowered goddess? There is a difference and I at least would like to hear the message in a whisper so I know what they are planting in my head. But I will give it a fair shot and pray for the best. With this series you have to go on trust.

it was rubbish. there are no subliminal messages and the noise is cruciatingly awful to listen to. dont buy. I'm not allowed to give a zero rating