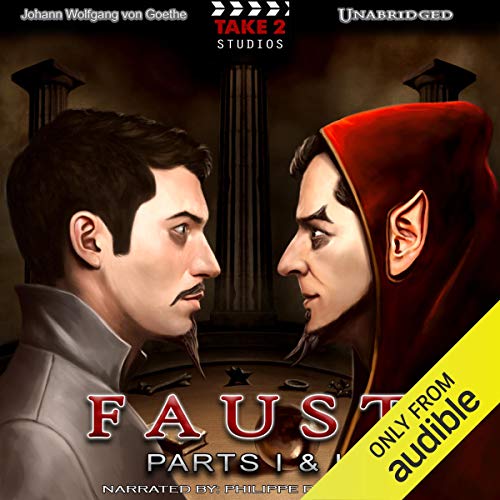 Faust has long been considered one of the most important works of European literature ever published. Johann Wolfgang von Goethe began writing Faust in the 1770s while still a young man, spending most of his adult life on the project. Faust was finally finished almost 50 years later, near the end of his life.

Faust is a philosophical drama full of humor, satire, and tragedy. In Part 1, the demon Mephistopheles makes a bet with God that he can lure Faust from the path of good. Faust is in the middle of a personal crisis when he is visited by the demon. Mephistopheles successfully lures Faust into putting his soul on the line for a chance at true happiness but the deal only leads to tragedy.

In Part 2, the tragedy has faded and Faust now finds himself on a new path of adventure as he strives to redeem himself and is eventually released from his evil pact with the demon.

What listeners say about Faust: Parts I & II

Difficult to Listen to

Something went wrong in the Translation of this classic. Or maybe it has to do with the reading of it. I don't know but it is hard to listen to and understand at the same time. I don't think you can translate Faust into English whilst maintaining the Germanic poetic meters with the meaning intended by Goethe. It does not flow, it it jarring and annoying.

I am disappointed enough to return this title and try again with another (pros) translation which hopefully represents the original story in a way I can enjoy listening. Perhaps if I was reading it myself it would be different. I don't know. All I know is that this production does not work for me.

The story can be got but the poetry is to simple, and only occasionally rhymes, I was hoping it would be like Etrigon from DC comics.

After listening to the other samples I decided to give this version a shot. I was definitely not disappointed in the least bit as Mr. Duquenoy put on a masterful performance throughout the entire book. Another deciding factor, both parts of the poem/play are included in this version, many of the other books seem to only include the first part.

english is to german...

...as great is to good when it comes to Faust. I expected some challenges with the German to English translation as Faust is a poetic work...and I could sense that this was not originally written in English. Seeing as I cannot read German, I have to admit that this translation did not disappoint - I really enjoyed it. As for the audiobook aspect of it - I was tempted to down the book less than 30mins into it and get a printed copy. It was difficult to follow. Then it dawned on me - Faust was not meant to be read, it was meant to be heard (seen actually - as a play). So hearing it grew on me. It is still difficult to follow and I had to strain my imagination but it was worth it.

Faust is a story that one should cover a couple of times. This was my first pass and I need at least another two to get out of it what I was hoping to. Part I sets the bar really high, and Part II frustrated me at times - but it combines in an epic tale without which Part I would be half-baked.

As for the narration - I think it was expertly done but for something as challenging as Faust, I expected a slightly more diversified reading style - perhaps multiple actors / narrators with different styles for Faust and Mephistopheles at least. I listen to many books at 1.5x or even 2x speed, but Faust is something that should be listened to at 0.75x or perhaps even 0.5x. I needed it slower with more deliberate pauses. There's a lot to take in, a lot to visualise and imagine, a lot to digest and for that the narration was a bit too challenging for me.

Faust is one of those thought provoking classics that depicts how our actions have consequences. The narrator really did an incredible job in his performance of this book… his voice was a pleasure to listen to. Great book to add to your collection!

Although no doubt this awesome epic, I had no clue what was being said the whole time 🙈😓, between the old English and never ending poem, I found myself completely and utterly lost🧐

To no discredit to the translation and the undertaking of this 🤥. However, I find I don’t enjoy 10 hour poems nor 5 minute ones, I managed to get 10 minutes in waiting for the devil 😈 to enter (feeling as if 10 minutes was 10 hours) the scene only to realize that he already made the deal🤝!!!!

This book may be delightful for literature, poetic, and overachieving folk, although I would love to listen to words I never have used or will for the next 10 hours, I will just wait for a modern version with common language of this day and age to be produced with light poems for my simple mind 🤭.🤘🏾

How can you even attempt to write a "review" of such a universal masterpice?

By just stating what seem so obvious; The fact that this is one of the best books ever and truly a masterpiece, probably it can compel somebody to read it or listen to it. It has so many insights in to the nature of the human being and the desire to be selfish, the need to know and the product of all the forces fighting inside an individual that want to follow his / her true nature , even against themself, the heart and mind always will produce good if the search is honest.

did not realize this is a play. entire book in rhym. i want my money back...

Worst narration of a book yet

I hated the narration of Faust so much that I abandoned it about 5 scenes into the work. Having read this book many years ago, I was looking forward to experiencing it as an audiobook. What's the problem? The reader has the wrong accent and no dramatic sense. It borders on robotic.

A hard work, made more difficult by the production

This is hard stuff. I will continue to search for a better production. I like the Bayard Taylor translation. The rhyming scheme transcends the speakers, so perhaps that is why the producer thought he could get away with a single voice. That single voice, though, also speaks the name of the character, and having destroyed the rhythm with that, proceeds to recite the lines in a voice that does not vary between characters. There are lots of characters. Even bugs have something to say. This would require a big cast or a very skillful actor, like Ian McKellen or Juliet Stevenson. Failing that, the result is sing-song and tedious.

Reader phrased well. Translator portrayed well. Author knew all was well. Faust went not to Hell. And the enemy is naught but a worthless fool who carves out attention from those foolish enough to believe themselves worthless.

Alright so I have good news and bad news the good news is. This is an insane undertaking, I couldn’t believe that this was going to be an actual poem. I was mistaken this is a ten hour poem that rhymes and make a wonderful coherent story. The bad news is. I learned that I personally prefer my stories not be told in rhyme. But that is a personal preference, if you’re a person who enjoys poetry I don’t think you’re gonna find anything better than this.

At first I was put off by the sample but this was the only complete version available. I did, however, enjoy the reading and will listen to it again in the future. As a classical music lover I was already familiar with the general outline through the compositions of Berlioz, Schumann, Schubert and Mahler and in particular the opera setting by Gounod. I have also heard abridged dramatisations on BBC Radio. Reading it complete filled the gaps and put everything in context.
My preferred way of reading such a work as this is to follow the visual text and have it read by a more experienced reader than myself. The main snag with this rendition was having the characters’ names relayed before every item of spoken dialogue. Although this was irritating and sometimes confusing it is an unfortunate necessity in an Audible book. However it would have helped if the narrator had changed the pitch of his voice for these headings. I got used to it and in any case it was less of a nuisance in the longer speeches which were also more poetic.
I also found a guide very useful. I would strongly recommend this despite the mentioned snags.
Ken Smith

I cannot distinguish between the
characters.
The reading is slow, boring and dynamically posh. Increasing the speed only makes it harder to hear due to the particular pronounciation.

This is no book one can speed-read, and grasp - but instead a Curse.

Faust is a poetic puzzle inter-twined with the main character surfing through Mesopotamian, Greek, Roman mythos - layered with Biblical tales.

It will require you to dive deep to read up on various historic figures, philosophers, kings and hero's to get just the basic understanding of what is being collated through the text.

This text, although slightly over 10 hours, took over a week to conquor. In the same time, I have spent nearly 50 hours on additional reading, research, and re-reading passages to understand what Goethe was trying to portray.

At desperate times, I even retreated to academic articles, and online summaries, just to get through nearly impenetrable sections of Goethe's