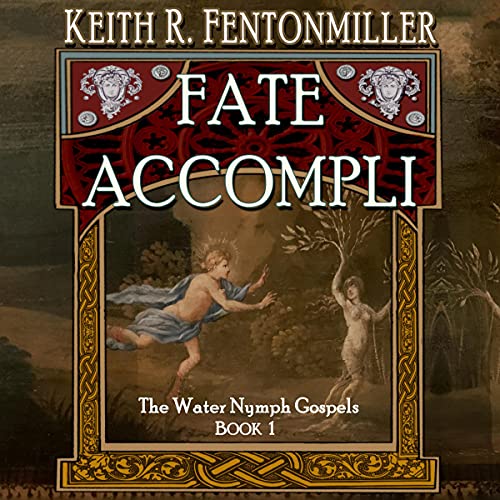 Fate had one job. And she bungled it...badly.

Now only a cursed hatter and a tormented water nymph can fix the damage.

Andolosia Petasos dreams of being the next Da Vinci. Only Fate has cursed him to make hats.

It’s not Andolosia’s fault. After all, a Greek ancestor stole Hermes’ teleportation hat and brought down all of Olympus. And the gods don’t easily forgive that sort of thing.

In Olympus, Moira strives to weave a future that will fix the heavenly disaster. The very one she created.

Meanwhile, the rich and powerful Sansone de Medici hires Andolosia to create a fantastical hat. A job that will change the hatter’s life.

At de Medici’s Florentine palazzo, Andolosia encounters the feisty Carlotta Lux. She claims de Medici has kidnapped her, because she is descended from Daphne, the legendary water nymph. Of course Andolosia has no choice but to rescue her using Hermes’ hat. But instead of gratitude, she is furious. Carlotta had been within inches of killing her captor.

Because Sansone de Medici is not who he seems. He is driven by a supernatural urge that demands he never gives up the chase.

And Andolosia and Carlotta can’t run far enough to escape him.

What listeners say about Fate Accompli

Started listening on a six hour road trip then listened in half hour chunks during my commute. Often I’d reach my destination and sit in the car just to hear what happens next. Interesting weave of mortals and mythology punctuated with lots of humor along the way. An enjoyable read. I look forward to the next book in the series.

The narrator did an amazing job personifying the characters. My only quibble is that Gennaro sounded like Sean Connery which was a bit distracting. Not a dealbreaker though.

Read it without stopping!

The interweaving and altering of existing, familiar Greek mythology with a fresh new set of characters in the earthly realm of European history takes the reader (listener) on a journey with laugh out loud moments. There are also moments of contemplation about feminism and religious persecution, individual choice and our ability or lack there of to alter the course of our own lives. While reading I was swept up in the story. I am curious to see what happens next to the characters who continue to try to exercise free will but find themselves continually battling extra-worldly power and conflict. And as with any fiction that is meaningful, I am left wondering about my own free will and what forces beyond my consciousness pull my strings and impact my life.

What a fun, bizarre, deeply hilarious book! Crazy concepts, eon jumping storytelling with a fantastic voice artist – seriously, one of the best voice talents I have ever heard.