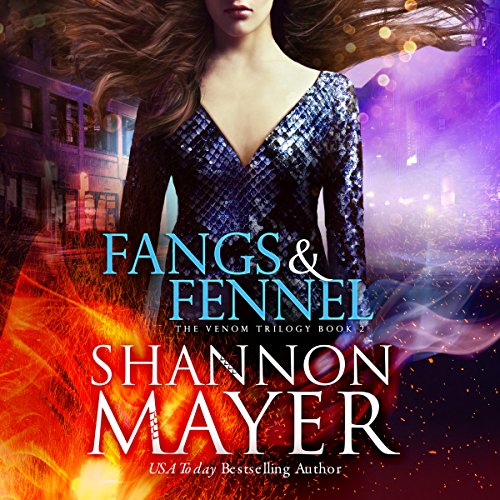 Alena Budrene is not just a gifted Seattle baker - she's also a supernatural. Having survived the virus that made her transformation necessary and outwitted an attack by a Greek hero, she's ready to settle down and deal with the challenges of living as a "Super Duper."

But nothing is easy for a woman who can turn into a giant snake. Threatened by her unprecedented strength, Alena's enemies team up against her. What's next on the menu? The duplicitous demigod Theseus - backed by a ruthless vampire gang and the power-hungry goddess Hera - is determined to lure her into a glorious, and rather public, battle to the death.

Now humans, even the ones Alena risks her life to protect, are afraid to acknowledge her existence. And when the friends who once rallied around her begin to fall prey to Theseus's manipulative schemes, Alena realizes she must act before she loses everything. But will the price of success be too high to pay?

Enjoyed ed every minute of the series and was happy that I gave a shot to this series when most 2018 couldn't catch my attention. plus the narrator is fantastic.

This book has me hooked and salivating hehe, its addictive and a compelling read/ listen too, i love Alena she is sassy, feisty, sexy and hot as hell and can bake cookies to die for, and Remo? Omg their chemistry sizzles like melting butter in a hot baking pan (grins n sighs). Saskia Maarleveld us awesone ib her narrative, she brings the character to life. Thank you ladies (bows) xox

I hate,hate when the heroine of the story has all these powers and doesn’t know how to use them or takes the time learn how to use them. She just makes one stupid decision and mistakes after another and wouldn’t your first response for the snake oil is to find an antidote? I was soooo hoping she became more bad ass and smarter in this book but Noooo. She doesn’t want to kill the people who wants to kill her and she can’t cuss and she keeps saying married even though legally she is not and her husband had moved on !Walking around like no one is after her and is surprised when someone is trying to kill her dumb,dumb,dumb...Ugggh...smh....Her storyline is so silly and ridiculous. I love the other characters especially Ernie .

What does Saskia Maarleveld bring to the story that you wouldn’t experience if you just read the book?

She read the book fine, only had a few different dialects to differ between the characters the writer had, but I think she did well.

In the beginning the weakness she showed her husband she is trying to get a divorce from and the girlfriend he constantly flaunts in front of her. She is up against Theseus in this book. Theseus is known for strength and courage, also being intelligent and wise. He is also known for helping the poor and oppressed. He took one of Alena's friend to get knowledge and to have a strategic plan on killing Alena. He should have gained knowledge of her personality from her friend, which all the "crow" girls when together. He should have realized that Hera was using him as a vengeance pawn. This just makes him NOT as all the legions paints him as. Also when Alena had the chance to kill him and be done with the obstacle that Hera created. SHE FAILED! Weak and stupid, can't stand when the writer tries to create a main female character. You can have be kind and polite, caring and compassionate and still know when to remove the threat that is invading her life. At the dinner that she poison all her family and weakened Theseus, even though it would have shown her mom she was truly a monster it would have saved her entire family if she killed Theseus or at least she could have removed him from her family's house. By removing him instead of leaving showed she truly didn't care what happened to her family, so why care what her mom thought of her by doing so. To me the story is poorly developed and the writer was just trying to make it longer when the book should have ended at her parent's dinner. I had to listen on 2 and 2.5 speed to see how stupid Alena really is and what direction the writer was heading towards. Still shaking my head over this one and sick that I wasted a credit on this book.

I think the writer has made Alena a weak, beaten female character and then she gives her the ability to change into a great monstrous snake creature that has no mind except for killing. Then the writer shows Alena even in the monster form cares about people and the same feelings she had as a person. I see no clear direction for her character. I don't think a doormat for a main character is good for all to see. Maybe others can't see what I am talking about but then you really need to pick other books where women as a main character are shown as a good hearted person and still kill when needed.

Sorry it was ok but if I hear one more time no one believes in me I can protect myself blah blah I was starting to root against the main character! I read all 3 thinking it would improve. I was wrong.

i loved the wsy it was read and acted out. the pacing was wonderful. as was the speech.

The first book started out with a pathetic heroine that had me rolling my eyes and ready to turn it off; however, Mayer, manages to craft into a reluctant hero. It's charming and engaging if a bit contrived at times.

Not as good as the first one, disappointing.......

Nothing really sticks out as being overly interesting

The whole thing had a lot of whining and second guessing which gets old fast.

I didn't think this series could get better but it did!! This book was so exciting and intense and yet so much fun to read!! Alena and Remo... oh my gosh!!! I can not wait to see where it goes with them in the next book!! He is the perfect compliment to her, and the heat and attraction.. oh my!!! Friggin awesome book!!

This is the second book in this series and I enjoyed it even more. Laugh out loud in places and even sad and happy tears. I really liked the narrator Saskia Maarleveld.

Better than the first book, and I LOVED the first one. Can't wait for the third. I love this author.

great storyline progression. The author has fresh perspective and writing prowess..
I can't wait to read next book in series.