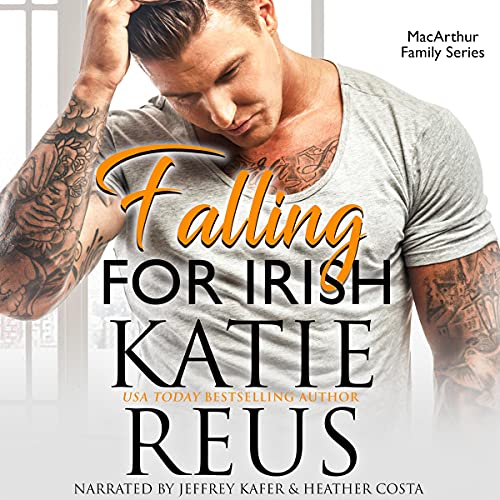 She walked away once.

When Kathryn Irish realized that she and Daniel were too different - and that he thought she was after him for his money - she ended things. When a job randomly puts her back on his radar, they hesitantly form a truce. But deep down, she knows she can never be just friends with him. She’ll always want more.

He never should have let her go.

Daniel MacArthur knows he made the biggest mistake of his life in letting Kathryn walk away. When she suddenly appears back in his life, it’s not a moment too soon - since she’s been targeted twice by a faceless enemy. She thinks the two attacks are random. But he’s not so sure. Is it because of her job? Or is something more sinister at play?

What listeners say about Falling for Irish

Perfect Russian tough guy with a heart of gold


Wow!  Such a great narration!  I loved the way I was pulled completely into this story with seemingly little effort on the part of these performers.  They each did such a great job and their voices were so pleasant I was swept up into a story that felt new, although I had read the book previously.

What a spectacular beginning to this new series!


This is a novella but it feels like so much more, mainly due to the fact Kathryn and Daniel had been in a relationship prior to the beginning of this story.  That carries a lot of weight and validates their emotions and responses.


I loved the way Daniel had perceived his relationship with Kathryn the first time around as well as his reactions to her when they were reunited a few months later. Any hero that is possessive, jealous and above all, protective, is a hero I will always recommend. Add in some smexy moves and all my checkboxes have been marked.


While this is primarily about the relationship between Kathryn and Daniel, it has its standard Katie Reus suspense and mystery threaded throughout it making it even more of a page turner.  I gobbled this down in one sitting and was immediately hungry for the rest of the series.


With action and drama sprinkled throughout, secondary characters I can’t wait to get more of and the sizzling chemistry with this couple, I highly recommend this!

a little mystery with your rommance

this story does. ot disappoint at all. I love the romance that Katie's stories always have but its her rich characters that draw you in. in such a short time she makes you care about the lead characters and the supporting characters so much so you remember everyone by name. this story was great and kept me totally engaged. I really did not expect the ending. total good read!

Love this new series by Katie Reus. The Irish family brings the fun! Looking forward to the next installment.

A good start for this new series

I read this book a while back, and as it usually happens , I enjoyed the audio even better since it brings the characters to life.
This novella is the first in the author’s new series, MacArthur Family. The story belongs to Daniel MacArthur and Kathryn Irish.
Daniel, a successful and wealthy businessman and Kathryn, a brilliant security analyst , met by chance. After an incredible affair, fears of their differences and further misconceptions, Kathryn broke it off.
But the love never ended and fate brings them back together.
While a relationship resumes, someone is out to harm Kathryn.
Even though as with most novellas, it suffered a little on the plot development, it was entertaining and a good intro to the characters of the future books.. I was able to figure out early on the culprit, but still , it was good reading for an afternoon of leisure.
Kudos to both narrators for doing such a good job with the voices.

A novella yet was paced with a good plot, suspense and second chances. Money and thinking they had different goals she broke it off. Second Chances when a job brings her back. I like that he stated right from the first he wanted to make it work this time, Narration added to this heartwarming story. Given audio for my voluntary review