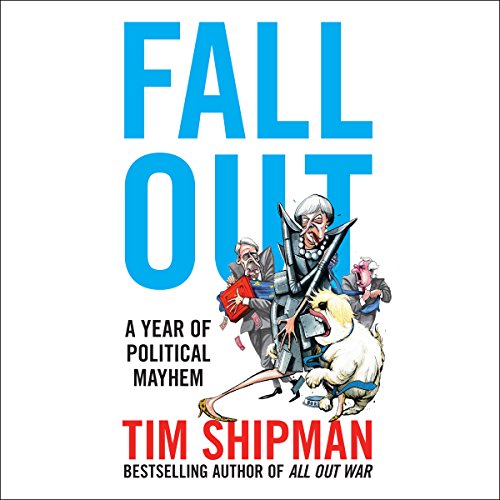 Fall Out: A Year of Political Mayhem

By the best-selling author of All Out War, short-listed for the Orwell Prize 2017.

The unmissable account of politics covering Theresa May's time as PM through to the end of the election campaign. Stuffed to the brim with revelation and explanation of political debates and arguments and a superb follow-up to All Out War.

'May you live in interesting times' says the proverbial Chinese curse. And it is difficult to think of a recent period in which politics have been so unpredictable and fast-changing. As Political Editor of The Sunday Times, Tim Shipman has been at the forefront of it all. His book of last year, All Out War, has become the book on the 2016 referendum campaign. Shipman's writing is noted for its grasp of human drama as well as his intimate understanding of the political arguments and differences at stake.

Fall Out continues the story of British politics from the entry of Theresa May into Downing Street as Prime Minister through to the end of the general election campaign - and its aftermath. Written with his trademark wit and access to sources no-one else has, this book takes all who listen to it to the heart of the political drama that is unravelling every day before us as Britain tries to work out its new place in the world post-Brexit.

Praise for All Out War: "I can't imagine a more even-handed or better sourced, all points-of-view account of the biggest story in British politics since WWII.... A fine book.' (Andrew Marr, The Sunday Times)
"Shipman's dispatches are a must read if you want to understand what happened beneath the smog and beyond the noise of the conflict." (Nick Robinson)
"Shipman is brilliantly qualified to write the inside story of the referendum, with his unrivalled access to all the players." (John Rentoul)

What listeners say about Fall Out: A Year of Political Mayhem

I couldn’t stop listening to this, the insights into the recents British political events was gripping and not a little depressing to find out how ineffectual some senior members of government are. The shear volume of sources and first hand accounts is incredible. This is bar far the longest book I’ve listened to but it didn’t feel like it.

The narrator over enunciates words in an ironic way which is intensely annoying. His general delivery is so mannered it sounds insincere and completely ruins enjoyment of a decent book.

This is an absorbing and incredibly well researched book. My only reservation is that it takes forever to listen to on Audible and there is such an extensive cast of characters it is easy to get lost in the detail. I will probably buy the paperback version so I can read it properly at my own pace.

Fascinating and even handed first draft of history

How we got into the position we are in now. It is really useful to read what is a very contemporary history. No one comes out of it very well. It throws into sharp relief the fundamental inadequacies of our entire political class but without gratuitous cruelty. It seems the conclusion the book draws is we have some very ordinary humans attempting to fulfil the extraordinary task of extracting the UK from the EU. And failing.

What did you like most about Fall Out: A Year of Political Mayhem?

This is an incredibly well researched book. The author tells a compelling story quite brilliantly.

The detail. Here is the background to a year which we remember well - which explains so much of what was previously hidden.

I admire Farley as an actor, but his reading of this brilliant book made it hard to follow. His frequent emphasis on the wrong words (changing the sense of what the author was saying) and the pauses in the wrong places were incredibly distracting.

As someone who remains in despair over Brexit, the book increased my feelings of anger directed at the clueless politicians who are driving this Country over the proverbial cliff.

Yes - I would highly recommend this book, but if you have a Kindle, get that version. Failing that, just buy the book and read it the old fashioned way. If you are minded to get the audio version, read the 'free' sample first.

This makes one wonder how on earth we arte governed, we put trust in the people we elect .

Another superb account of events on the Brexit journey. A much improved performance as the impressions and accents were less prevalent. Can't wait to hear part three.

Just an outstanding insightful coverage of the elite’s going’s on during the post Brexit referendum. Shipman really succeeds in turning all of these public figures into memorable characters for his narrative making this an easy and absolutely essential read for casual politics followers like myself.

good but too long

detailed and interesting account but probably too much detail. 20 hours in and I've given up because I don't want to listen to the next 8 hours!

We've all lived through the last few years since the EU referendum, but I had never previously appreciated just how inept all of the political parties were thereafter. A fascinating investigation, backed by apparently solid and well-referenced research. Narration is delivered clearly and with (dialogue permitting) gravitas. A good listen, one I'll go back to again and again.