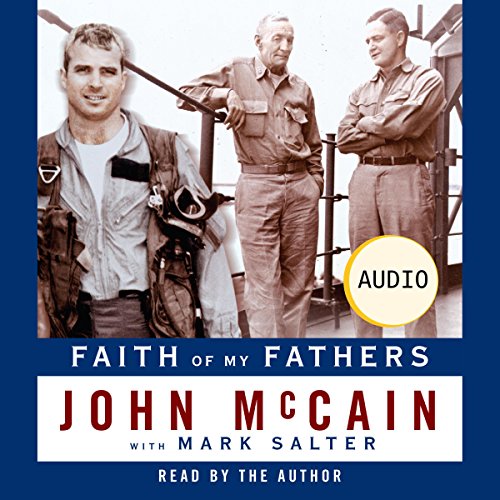 Faith of My Fathers

John McCain's grandfather was rail-thin, a gaunt, hawk-faced man known as Slew by his fellow officers and affectionately as Popeye by the sailors who served under him. McCain Sr. played the horses, drank bourbon and water, and rolled his own cigarettes with one hand. More significantly, he was one of the Navy's greatest commanders, and led the aircraft carrier of the Third Fleet in key battles during World War II.

John McCain's father fallowed a similar path, one equally distinguished by heroic service, in the Navy as a submarine commander during World War II. McCain Jr. was a slightly built man, but, like his father, he earned the respect and affection of his men. He, too, rose to the rank of four-star admiral, making the McCains the first family in American history to achieve that distinction. McCain Jr.'s final assignment was as commander of all U.S. forces in the Pacific during the Vietnam War.

It was in the Vietnam War that John McCain III faced the most difficult challenge of his life. A Naval officer, he was shot down over Hanoi in 1967 and seriously injured. When Vietnamese millitary officers realized he was the son of the top commander, they offered McCain early release in an effort to embarrass the United States. Acting from a sense of honor taught to him by his father and the U.S. Naval Academy, McCain refused the offer. He was tortured, held in solitary confinement, and imprisoned for over five years.

This memoir is the story of what McCain learned from his grandfather and father, and how their example enabled him to endure those hard years. It is a story of three imperfect men who faced adversity and emerged with their honor intact. Ultimately, Faith of My Fathers is a story of fathers and sons, what they give each other and what endures.

"McCain's memoir is too good to be dismissed as simply another campaign book. It is a serious, utterly engrossing account of faith, fathers and military tradition." ( Publishers Weekly)

What listeners say about Faith of My Fathers

The Meaning of Character

Well written. Even better since read by the author. Expresses the the meaning of true character, devotion, humility, and love for America. A great book about a great leader. Perhaps the most important book you should read this year!

Politics not withstanding, I now understand John McCain. His history and background come alive. I am a fan of Author read works, and this one is no exception. If you want to understand the man, then give this book a listen. I have listened to it four times myself. You will enjoy it.

A must read! A man of true character & substance!

This is a man of true character and moral conviction. From a generation that is almost lost to us now. There will never be another one like it.
John McCain has written and narrated a brilliant, brutally honest, self realized story of his life up until he was released from a POW Camp during the Vietnam War.
He speaks about his the love of our Nation, his family's long history of Military service to our Nation, and self sacrifice for the greater good.
How he survived being shot down, gravely injured, captured, tortured, a POW for 5+ years, and maintained his humanity. Well, that is a credit to his parents, family, teachers, his fellow prisoners of war, his Faith and himself.
What a great man, WHAT A GREAT MAN, I don't think I can stop saying that.
This is the person, that we should have running our country.
I thoroughly enjoyed this book.

Before reading John McCain’s new book “The Restless Wave”, I decided to reread his book “Faith of Our Fathers”. I originally read this book in 2009. I am glad I reviewed McCain’s life considering his cancer and the politics of the day.

In “Faith of Our Fathers” McCain reviews his early life and tells about the lives of his grandfather and father. Both men became 4-star admirals. His father was head of CINCPAC during part of the Viet Nam War. I found his stories about growing up as a “navy brat” most interesting. The military culture is unique. McCain also covered his life as a POW. The story ends with his release from the POW facility. If McCain writes a book about his life from his release to the present, I would enjoy reading it.

The book is just about five hours. John McCain did a good job with the narration of the book. I enjoy listening to the author read his book particularly a well-known man like McCain whose voice I recognize.

Donald J. Trump should read this book. And then Trump should feel very ashamed! However, Trump is a coward, traitor and a lout.

A testament of an honorable man

Anyone who doubts John McCain's heroism should read this book.
it's only real drawback is brevity.

The message is more important than ever today

Given today’s political climate of tribalism and hate, it is uplifting to be transported back to a time when John McCain develops the basis for the honor and integrity that he carried forward to the end of his life. Although I did not vote for him, and would not have agreed with all his policies had he been elected president, there was never any doubt in my mind that he was an honorable man. Listening to this book, helps you understand what true sacrifice for one’s country really means. For that, John McCain was truly a hero.

Senator McCains account of his family's place in American history is indelibly shared. This story has given me a perspective on heroism, bravery, and the tenacity of principled men.

I found this book interesting, moving, and heart renching
I felt Senator McCain was sitting there next to me telling me his story. His story was so interesting. We all know the POWs were beaten; but not how, he tells us how. We didn't know how the POWs felt while being held, he tells us how they felt, how they endured.
I love listening to his voice.