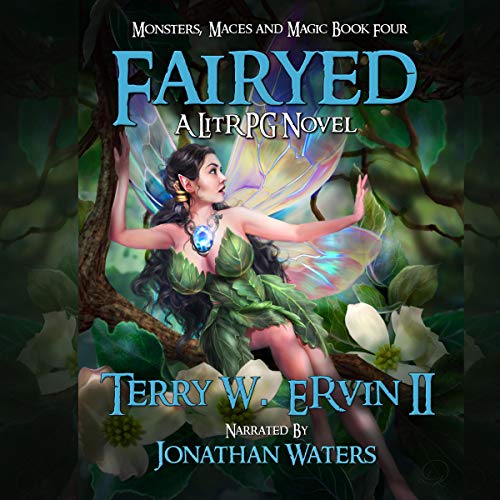 Never deal with a leprechaun.

Finding a pot of unclaimed gold just doesn’t come without a price in the Monsters, Maces and Magic RPG world. Stephi discovers this the hard way while tangling with a mean-spirited leprechaun.

With Stephi, now transmorphed into a fairy, the party must do the leprechaun’s bidding. Otherwise, Stephi will remain a diminutive fairy with no hope of returning to her former elf self. But leprechauns aren’t known for their straight dealing. Neither is Higslaff, a manipulative pawnshop owner who possesses what the leprechaun desires.

Glenn, Kirby, Stephi, Ron, and Derek - RPG players trapped in the game world as their characters - set off on a mission to Riven Rock, a city rife with cruelty and corruption. There they must inflict retribution for an attack against the pawnshop owner. Danger and deceit threaten the party at every turn. Can they avoid getting caught up in the brewing war between rival thieves’ guilds? Will they survive the journey and the perils of Riven Rock? As low-rank characters, it’ll take all the skill, cunning, and luck the party can muster. And that might not be enough.

What listeners say about Fairyed

My Favourite of the Series (so far!)

This fourth installment of Monsters, Maces, and Magic finds our stalwart heroes on another quest! This time, Stephi, the extremely tall, ridiculously buxom elven magic user runs afoul of a wicked leprechaun, who meets all the cliched stereotypes; right down to the "pot 'o gold", wearing mostly green, and talking in an over-the-top Irish accent. Having succumbed to a bout of greed, in hopes of using the the pot of gold to purchase a wish spell to send them all home, Stephi finds herself turned into a fairy. The vile leprechaun promises to change her back, provided they can find a single coin from his pot that was stolen by a dwarf. Sounds like a simple enough quest, right?

The gang heads from the familiar Three Hills City to Riven Rock; a wretched place that one of the characters (Kirby, I think) compares to Moss Eisley from Star Wars. What's more, they find themselves embroiled in the Guild War between the respective Thieves Guilds of Three Hills City and Riven Rock. This particular aspect of the story is what I found most interesting. Plus, I like that Tom / Josias, the retired thief-turned-barber from Book Three, returns. Tom is a 'player character' like the rest of the group, yet neither he nor they realise they are all PCs, which adds another layer, where the reader knows something the characters don't. In a previous review, I stated that I hoped the humanity and value of NPC (non-player character) life would be addressed more, and we do see that a bit here. The RPG aspects of the game world are a bit more in the foreground, such as leveling / ranking, hit points, etc. though thankfully it's not overplayed. The question about whether NPCs are really people becomes a theme in itself, as side characters, such as the boarding house owner, Carrie Lovelace, become a lot more developed in both character arc and personality. Since we already know that Tom is a "real" player-character, I now wonder who else in this world might be as well.

The main cast also become further developed. More so than in previous volumes, Kirby's limitations due to his being only thirteen back in the 'real world' come into play. By the same token, Ron and Derek face the continued handicaps of having 'rolled' intelligence scores below their actual intellect in the real world. Derek is continuously flustered that, though a college student back home, he is illiterate in this world. While Ron has the highest intelligence score of the group, we learn that he was a certifiable genius in the real world, and finds himself also limited. I, personally, really liked that we see a lot more of Ron, who is not quite the 'vanilla' generic leader figure, but has a lot more depth that gets explored. And as always, the perspective is told through Glenn, the gnome healer and former college sophomore.

I will say that each book feels very episodic, as their desire to acquire a wish spell in order to return home (which they're not even sure if it will work) is more background that only gets occasionally mentioned and is never central to the plot. This is fine, as I think I would be sad, should they ever manage to return home and the story ended! One added layer to Stephi's character is her learning that, should they never be able to return, as an elf, she is practically immortal and will continue to live on well after the rest of her friends die of old age. Though this is only mentioned briefly (and I cannot remember in which book), it does make for an added emotional dynamic.

As before, I listened to the audio version of this book and was not disappointed. Jon Waters must have a vast library of audio files of all the characters he narrates, as he's able to keep a rather large cast consistent throughout the series. I especially like how he does Ron's overly-wordy / complicated manner of speaking. This was easily my favourite of the series so far, and I will be anxiously awaiting the audiobook release of Volume Five!

Another Adventure in this Series

I really enjoyed this group of Mismatched Adventurers and their antics. This time Marigold makes a big Big mistake and the whole group have to go through a bunch of different Problems to finally resolve it. Narrator does a good job with the characters voices and the storyline. This is a Fun Series to listen to.

What a clever way to keep the series interesting. I love the new twist in this storyline to a main character. Exciting new adventures with all the amazing characters we all love. I love the banter between them.
The narration was fantastic. Sometimes his words sound a little rushed but, he has a great voice and does a fantastic job bringing these characters to life.
I recommend this book/series.

Compared to other longer and more epic plots and stories available in the LitRPG genre this series is Entertaining but not overly complicated. It’s greatest drawback is how brief each book really is. However, the plot and characters have developed well and are written with care. The greatest strength of the product is of course the reader who does an excellent job. I look forward to the next book.

Enjoyed reading/listening to this author.
I really enjoyed this story, thankyou.
Narrator is great also.
Hoping for another book.