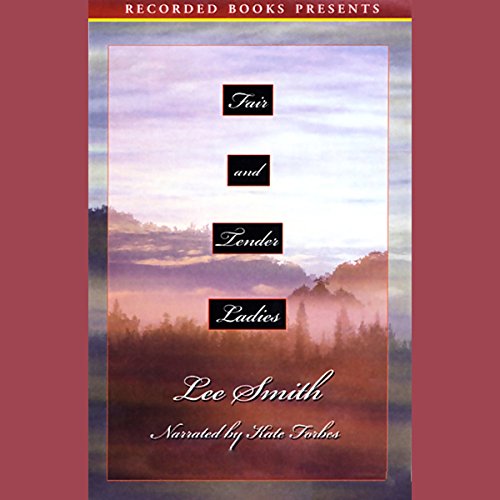 Author of many novels and short stories, best-selling writer Lee Smith has received numerous awards for her works, including two O. Henry Awards. Fair and Tender Ladies is an epistolary novel that traces the life of Ivy Rowe, born in the isolated Virginia mountain community of Sugar Fork.

Twelve-year-old Ivy writes her first letter to a Dutch pen pal, who never replies. She also writes many more to her sister Sylvaney, who is mentally disabled and illiterate. Gaining more from writing than receiving any replies, Ivy continues a colorful stream of letters during her long life. Through births and deaths, marriages and funerals, the decades of Ivy's life are captured in a rich dialect that carries the sounds and sights of the Appalachians in each syllable.

Lee Smith's genius lies in her ability to create the landscape of a character's mind with economy and grace. Perfectly complementing Smith's talent, narrator Kate Forbes provides a unique voice for Ivy.

"Readers will be thoroughly captivated by Ivy Rowe, the narrator of this epistolary novel, and will come to the end of her story with a pang of regret. Smith has produced her best work here, creating a fully rounded heroine and other vivid characters who inhabit Virginia's Appalachia region....In the old tradition of oral storytelling, Smith has fashioned a dramatic, magical, poignantly true-to-life tale." (Publishers Weekly)
"Ivy writes with a verve and immediacy which prove that her creator, Lee Smith, is a storyteller supreme." (School Library Journal)

What listeners say about Fair and Tender Ladies

I love mystery books and would not usually choose a fiction book. I am so glad that I chose this one.
I do not care how worldly we women get. You scratch the surface and there is an Ivy there.
A very well written and well read book.

one of the very best

because of the narrator, I could not stop listening. And learning. the author has it nailed down on the deep-southern psyche, regardless of the era. Explanations of customs and procedures were immensely helpful and integrated so seamlessly that I hardly noticed I was learning something new. The style of the writing as well as the accent of the narrator is perfect. Absolutely 5 stars.

I was unfamiliar with the works of Lee Smith until I listened to this audiobook. My family roots are in Appalachia, and I was immediately transported back to my childhood. The speech patterns and idioms brought my grandmother vivdly to mind. I have since read the book, and I don't think I would have done so if I hadn't first listened to it. The narrator does a superb job; anyone interested in the history of Appalachia would love this reading.

This is the best book I've never read. I loved every minute and was sad to come to the end. The narrator was wonderful and the story (letters) is beautifully written. I am now a forever fan of Lee Smith and will search out audio books narrated by Kate Forbes. I listened to this book while walking in the mornings and evenings and was so captivated that I found myself walking longer, further and more often than ever to hear more. I finished the 13+ hour audio in one week. I give this book my highest recommendation.

I bought this book some time ago, but for some reason just got around to listening to it. The narrator was wonderful! She WAS Ivy and the tone of the book, written as Ivy's letters to her friends and family, just drew me into the story,

Lee Smith is a terrific writer and listening to her book brings it out even more, I think, that reading it.

I was really sorry when the book was finished. I'd highly recommend it.

I read this book about fifteen years ago, and it became one of my favorite books of all time. I decided to get the audio version, but was a little afraid that the narrator wouldn't do justice to the voices in the book. I shouldn't have worried. The narrator does an excellent job with the dialects. Listening to the book was as wonderful as reading it.

I guess I'm a bit biased, because this is my favorite book, but it was just as good when I listened to it as when I read it. Again and again! Smith has a way of cutting through the cr*p and getting to the heart of how the character feels.

I believe the reader really brings this book to life. The book introduces you to the Heroine Ivy and the people in her life, thru the letters that Ivy has written throughout her life. This is the reason the reader is critical in the a book like this one and I am happy to say, this reader does a fantastic job. You feel as if you're privy to Ivy's thoughts as she writes each letter--and you hear her innocence, her incredulity, her sadness, her frustration, her anger and her happiness. I really enjoyed it and recommend it to anyone who is a lover of people and their individual stories.

I loved this book. It is the story of Ivy Rowe, a young girl growing up in Appalachia, and the world through her eyes as she matures into a young woman. She makes the world she lives in and the people in it come alive. You can almost smell the pine trees. Such a captivating story. I will listen to this one over again and again and recommend to my friends.

I have just finished listening to this remarkable audiobook and I am so tenderly moved. I want to grieve over losing Ivy, as her life came quietly to an end. No, her life itself wasn’t quiet- it was far from it – but I fell as though I have lost a friend. The fact that the narrator, Kate Forbes, read with a perfect Appalachian accent (the book takes place within an hour of where I now live), helps make it even more authentic. This book, told entirely by letters written by Ivy Rowe, gives a true voice to the Appalachian life that exists still today. This is a wonderful book, rich and full, and I highly recommend it to anyone to read. A real piece of Americana and excellent writing. It made me laugh many times (I rarely laugh out loud while reading or listening), and I shed a tear or two as well. Lee Smith is from Grundy, VA (near my hometown), and I do hope one day to be able to meet her. She is a magnificent writer, in my opinion!