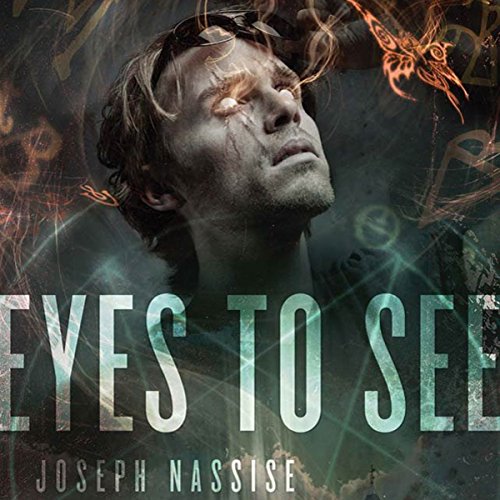 In an urban fantasy that charts daring new territory in the field, Jeremiah Hunt has been broken by a malevolent force that has taken his young daughter and everything else of value in his life: his marriage, his career, his reputation. Desperate to reclaim what he has lost, Hunt finally turns to the supernatural for justice. Abandoning all hope for a normal life, he enters the world of ghosts and even more dangerous entities from beyond the grave. Sacrificing his normal sight so that he can see the souls of the dead and the powers that stalk his worst nightmares, Hunt embarks upon a strange new career - a pariah among the living; a scourge among the dead; doomed to walk between the light of day and the deepest darkness beyond night.

His love for his departed daughter sustains him when all is most hopeless, but Hunt is cursed by something more evil than he can possibly imagine. As he descends into the maelstrom of his terrifying quest, he discovers that even his deepest fears are but prelude to yet darker deeds by a powerful entity from beyond the grave... that will not let him go until it has used him for its own nefarious purposes.

“Brings urban fantasy to a new level. Heartbreaking, deeply insightful, powerful, and genuinely thrilling. Joe Nassise has just raised the bar for the whole genre.” (Jonathan Maberry)
“A great read and unlike almost anything else I’ve read in urban fantasy: It’s hard-boiled and dark, definitely its own beast. Damn, this man can write! I’ll be standing in line for book two.” (Kat Richardson)
“At last — something new under the urban fantasy moon. Nassise’s visceral prose and dark, gritty setting propel the blind Hunt and his unique ghostly companions, Whisper and Scream, through an urban nightmare where nothing is what it seems.” (F. Paul Wilson)

What listeners say about Eyes to See

What did you love best about Eyes to See?

I loved this book. It was a unique storyline and I wasn't able to predict what was going to happen next...which was really nice! I loved the narrator and can't wait for more Jeremiah Hunt books to come out!

What other book might you compare Eyes to See to and why?

It seems similar to Jim Butcher's Dresden series. The beginning was so similar that I was expecting it to be a rip off of that story, but once I got a little further into it, I saw the story going in a completely different direction.

Well worth the credit

This was different take on urban fantasy held my attention from the opening lines. The reader gave very good performace of the story. I would recommend it to anyone who likes characters like Harry Dresden or Felix Castor.

I loved the way this book pulled me in to it's otherworldly story. I enjoyed it a great deal and if you enjoy a story about keeping your humanity though all else is gone and the adventure and struggle that this book takes you to, then you will enjoy this too. The narrator was excellent as well.

This is a fantastic audio book and overall story. I really enjoy the fresh perspective on the Urban Fantasy genre. Joseph Nassise writing is rich and narrative without bogging down on undue details. He draws you in and keeps you riveted. Anthony Bowden nails the voices and personalities of each character. A very dark performance. I would highly recommend this one for anyone looking for something different than another book of vampires and werewolves.

This book definately had me guessing...I really enjoyed it. I actually can't wait for the second one. I cried at the end...I mean I actually cried, I guess it is because I am a Mom. Definately recommend this book for anyone who wants something different.

An engaging story with great narration. I didn't want to leave my car. I can't wait for another one.

What other book might you compare Eyes to See to and why?

This book is like a Dresden files substitue, a little darker, a little more cranky, but it has the general feel and taste.

The Narrator is good, and gives a good life to the players in this story.

it starts in a weird way, the first few minutes you think you made a mistake, then you get so caught in the story you feel sorry you had to sleep to go to work the next morning.

Really good! Loved the story and the performance

I had just tried listening to a zombie story that was nowhere near as good as it sounded. This one came along as a suggested book and the synopsis sounded great. AND IT WAS!! I can't wait for the next book in the series!

Your Eyes Must See this Book

A fantastic read and highly recommended to any lover of paranormal, gothic or horror fiction.

Where does Eyes to See rank among all the audiobooks you’ve listened to so far?

this book ranks in my top 10 audible books

probably hunt was my favorite character but, the hedge witch and whisper were up there as well.

What does Anthony Bowden bring to the story that you wouldn’t experience if you had only read the book?

he brings the characters to life giving them different voices and tones, very good, but not in game of thrones league

I am here today to buy the next book in the series, I thing that speaks for itself

Best book I've read in a while!

What made the experience of listening to Eyes to See the most enjoyable?

This book has relighted my interest in supernatural books as well as audiblr itself. The storyline is complicated but grabs the reader and doesnt let go until the end. I couldnt put this book down - even at work and college! The characters are fascinationg and although the writer has kept alot of details away from the reader, the amount ehuch was given at certain points created even more wonder and interest!

What was one of the most memorable moments of Eyes to See?

I would have to say the scenes at the police investigations in the book. They were the most interestin due to the details.

What does Anthony Bowden bring to the story that you wouldn’t experience if you had only read the book?

I found that his voice was soothing tonlisten to with well pronounced words. Also the tone changes were great!