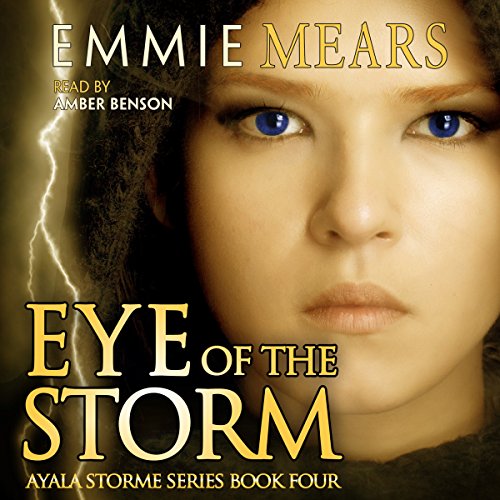 Eye of the Storm

Eye of the Storm

Earth teeters on the edge of a razor-sharp blade.

With the Summit on barely unified tenterhooks and hellkin bubbling into Earth with no sun to stop them, Ayala Storme has her hard-won family, an uncertain new love, and a team of allies - half of who have betrayed her in the past. When the cities of North America begin to fall to demon hordes, Ayala has to fight her way back into Nashville in a desperate hope to save her city.

With the witches trying to find the original source of the imbalance that allows hellkin a tie to Earth and the Mediators ready to draw their swords every time they see a shade, time is ticking away. The witches are working as fast as they can, but what they find may shake the foundations of everything Ayala has ever known - and the answers needed to salvage what's left of Earth may lie only beyond Earth itself, in the sixth hell.

The battles are over. It's time for the war.

A exhilarating whirlwind of an adventure!

With every word of this story you are taken on an intensely emotional and exciting journey. You will laugh and cry from the start to the end. And you won't want it to end. Author and narrator once again have outdone themselves.

Emmie Mears crafted a fascinating and highly original world in her Ayala Storme series. Eye of the Storm caps off the exciting conclusion. Well narrated and perfectly paced - this book may have been the most exciting and unpredictable end to a series that I've read in years. I loved every moment and couldn't leave the car til the last word of the epilogue was complete. Urban fantasy lovers will adore this tale of Ayala Storme and her band of Mediators, Witches and Shades as they battle the forces of Hell to save Nashville, and Earth, from certain decimation.

The war between Earth and the demons has come to a head, and Ayala learns that everything the Mediators have been told is a lie. She may have to sacrifice everything, and everyone, she loves to save the world. Great series finale with lots of feels!

Mears again does a great job with what appears to be the finale in the Ayala Storme series. Ayala Storme’s life has contained a lot of heartache… and a lot of love. Now, when things are at their worst for the world, she’s quite overwhelmed by both.

I will admit that I cried listening to Eye of the Storm. I can be a sap, I know; but, the weight of emotion Mears conveys in this book is really incredible—deep, deep feelings of being betrayed, of being loved, of losing something precious, of being in an impossible situation, of discovering a very personal truth. I can feel Ayala’s emotions very keenly in every book, and in particular in this final book, which is probably why I enjoy them so much.

I’m very curious to see if Mears will write in this world again. There is plenty of material, especially if subsequent stories pick up years later, or even years before, Ayala Storme’s story. Eye of the Storm leaves the reader wondering who the real enemy is, and it would be interesting to see that play out at different points in time.

Regardless of what she writes, I am willing to follow Mears into whatever world she creates. I’ll confess that I didn’t have high expectations when I first picked up Storm in a Teacup. But Mears has impressed me with some fantastic writing. I can’t wait to see what she does next.

Read if you need closure but be prepared for most of the good guys to die.