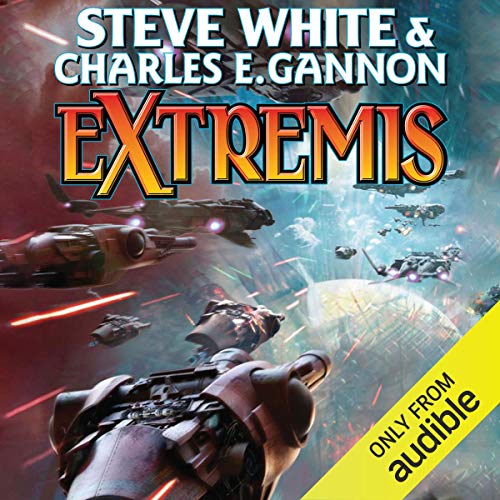 An implacable foe with telepathic cohesion in battle, near immortality, and eons-advanced engineering skills threatens to wipe humanity from the galaxy. What's more, they've overcome their one weakness - no faster-than-light travel - and have followed humanity through our star gates and beyond. But humans are the master of adaption and have got a counterpunch of devastating proportions in reserve. Now a hard-bitten and brilliant admiral must face down renewed alien attack and somehow communicate to the enemy that if he is forced to use his ultimate military option, galactic civilization itself may come to a fiery end.

What listeners say about Extremis

now for the one

very solid story with a nice concept. if you liked the others you will like this

Marc Vietor really bring the story to life. the starfire series continues to deliver with another ripping galactic epic.

This series has gone on far too long.

When they began, the starfire books had a premise, had a team of writers working together toward that premise. Now, it seems more like the one simply can't let it go. Enough already. This has been done to death, endless iterations of, "oh look we made this minor tweak and now warp point assaults are totes different".

Dude, find SOMETHING ELSE to write about other than the noble deaths steadily mounting as the fleet drives into the maelstrom. That scenes, those words are in EVERY SINGLE BOOK.

Worst one in a great series

Great series but this one was terrible. Way way too long with very boring subplots.

this is yet another compelling story in the Starfire series that should be made into a live-action series whether it's on Amazon or Netflix I don't care the Starfire series of books rich in story and drama wrapped around science fiction that compels the best space operas ever to recognize its greatness. This could be the Star Wars of the Next Generation but even better to turn each of these books into a series.

They killed the series for me. It's dead.

I really enjoyed the first four books in the series. This one was just plain bad though. I wanted lots of starship battles. What I got was something else. Too much girly b.s. It was like the view with some stuff blowing up in the background. Disappointed and then some.

What was most disappointing about Steve White and Charles E. Gannon ’s story?

They spent way too much time with the touchy feely stuff. I don't buy a book with a massive spaceship battle on the cover to spend half the time going over interpersonal, love interest character plots. They threw the military part out of what has, until now, been one of the best Military Sci-fi series I've ever read/listened to. They turned it into a romance novel.

Which character – as performed by Marc Vietor – was your favorite?

Marc Victor was a great narrator.

Did Extremis inspire you to do anything?

Yes, it inspired me to skip the next title in the series.

I felt like the ending was week, like you had one idea, and final found a place to dump it in. Why write about the great heroes return, and not make him part of the solution.

Every other chapter is a lesson on how bad religion is (all be it alien) and that humans have no souls. Ok we get it. But do we need a tretus for 41 chapters. And its BORING. The space battles are cool, but not enough of them. And way to many characters to keep track of. This book has to be endured not enjoyed.

a good story that was well performed by the narrator, if you like this genre you will love this.