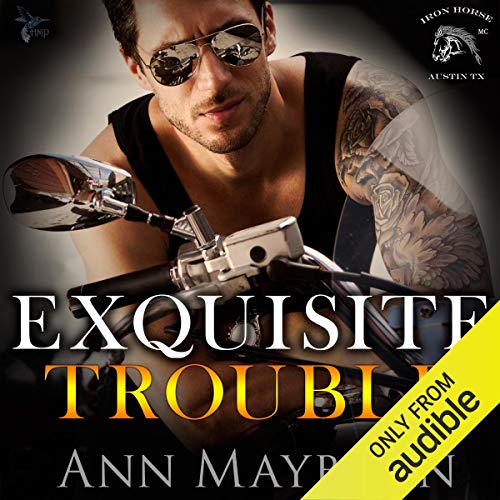 Book one in the Iron Horse MC series

Before I met Smoke, I'd never been kissed - really kissed - by a man, let alone a biker sex god bent on taking my virginity and my heart. I got dragged into the deadly world of the Iron Horse MC by my crazy twin sister, who is engaged to the club's president, and my even crazier mom, who cares only about herself. Smoke has been assigned by the club to keep me safe even though he's everything of which I should be afraid.

He's the kind of man who lives by his own rules and does whatever he wants whenever he wants, but he treats me like I'm something rare and precious, not a socially dysfunctional basket case who has no idea how to love but needs him more than her next breath.

Not that my feelings matter, because if we don't find my mother soon, the only thing I'll have to be worried about is who is going to kill me first.

This book was hot and I enjoyed it so much I bought 2 more books by the author. WORTH THE CREDIT

Great story to get lost in, and it deviates from the over-used angst we see so much of in this genre. Obviously liked Smoke, but also liked the mix of drama and suspense as well as Swan's background - again, different from the typical.

What does Andy E. Ross and Stephanie Wyles bring to the story that you wouldn’t experience if you just read the book?

Unusual for the narration to steal the show, but I have to say it really brought the characters to life, LOVE having dual narrators, I wish more audio's would take note!

Not extreme, no tears, but is is book one

Although really enjoyed the book, I would have held off purchasing it until the second book was out. I normally catch these things, but missed it. I hope book 2 is out soon.

I love the narrators it's really great when you can have a woman speaking the woman part and the man speaking the man part. Lots of steaming romance plus thrilling drama.
But this is a cliffhanger. I'm going to start book two next. And I can't wait.
I just hope there isn't a book 3 that I have to wait for, since audible does not tell you this when a story has other books. A lot of them not being cliffhangers is fine with me but I really hate listening to a book and not knowing at the end that it's a like
cliff hanger and you have to wait for book 2 or three.
But I greatly enjoyed this book.
But if you're not into dirty talking lovemaking seen this may not be the book for you.

This book is Exquisite!!!

Would you listen to Exquisite Trouble again? Why?

Yes it is absolutely addicting! Wonderful narrators! I can't wait for the next one?

What was one of the most memorable moments of Exquisite Trouble?

Love story between Swan and Miguel! Every women's dream!

Have you listened to any of Andy E. Ross and Stephanie Wyles ’s other performances before? How does this one compare?

Thank You so much and please hurry with the next one!

When Smoke is told to secretly watch Storm by the President of the Iron Horse MC he becomes obsessed by her so by the time they finally meet the tattooed, pierced, hot as hell and very Alpha Sargent At Arms is already half in love with her. But it's when Storm is kidnapped and then her life is threatened by the Russia's that Smoke's protective caring side kicks in, he doesn't want to let her out of his sight and is desperate to keep her safe. Then jealousy and possessiveness is added to his feelings so when he realises Storm has a painful reaction when being touched by some people he's all too happy to tell everyone to back off from HIS property.

Storm's a no nonsense waitress, a never really been kissed virgin with 'issues', she's had an unusual tough upbringing and she's been sheltered which makes her mild natured but when riled up she speaks her mind and isn't afraid to kicks ass. Her world comes crashing down after she's kidnapped and, when rescued, she's told her twin sister and Mother are missing, the Russians are after them all and that she is now under the protection of the Iron Horse MC.... and in particular the leather clad Biker sex God called Smoke.

Worth a credit? I thought this was an action-packed, addictive, just one more chapter listen, mainly told from Storm's POV but there are a few chapters from Smoke's POV too. With a romance that builds sweetly, a mysterious plot that's nicely unfurling, and a loveable H/H who are drooling for each other but what makes this a great listen is the dual narration. Because the male narrator says the male voices and the female narrates the female voices and this, in my opinion, is when dual narrators really work well and Andy Ross' deep voice was so smouldering and sexy. Definitely worth a credit or a buy.

Too Crude For This Listener & I'm No Prude

Overall - Read My Headline 3 Stars
Narrators were professional-4 Stars
Story-I Tried To But Couldn't Listen Due To the Language.More F-Bombs than words. 1.5 Stars

Not really an MC book

This is book one, and while it didn't end in a cliffhanger, I was not happy with the lack of depth in this book or the million and one random things it threw in.

-24 year old hot Virgin
-Twin sisters separated in their youth
-Vegas Pole dance winner
-Playboy spread
-Raised by Survivalists...as in 50 years of food in reserve for THE day
-Not much talk of club business, or anything to do with a MC, it was like it was thrown in there for the sake of throwing it in there.

'Eh, not sure I will get book two. While the story was fast paced and steamy scenes were written VERY WELL, it lacked substance and the flow was weird. If you are abducted to try and find your twin sister how are you just okay with that? How do you just start working for them? How do you wait a week to check your secret spot you always left letters for each other before....just random things kept happening and I was yelling at my phone a lot about WTH, seriously, did that JUST happen....very odd.

Good for sale, not a credit in my opinion....unless you like steamy scenes it may have been worth a credit just for those!

What a hot start to a new series for Ann Mayburn.
If you are a lover of MC stories this is a must book for you. Ann Mayburn has crafted a very different heroine for this biker book. The trials of the heroine's life were very different than I have read in any other biker novel.
Great narrator!

Smoke sets a woman on fire. Ex military and current Sergeant at Arms for the Iron Horse, this man’s mouth will send chills running from head to toes. Dangerous, sexy and raw, Smoke’s life walks a line that has most people running away screaming. When protection makes the badass fall hard, he and his exquisitely delightful and dirty mouth will stop at nothing to get the woman that has become his world.

Swan is so complex and simple all in one. Smart, beautiful, sheltered and naïve. Living in a bubble of a world, her social skills may not be up to par, but she can withstand and endure things most grown men can’t. Drawn into a world unknown to her simple life, Swan falls into head over heals in more ways than one. Family, independence and a God of a man, change her life in a blink of an eye.

Audiobook from my personal library.

Cliff hanger... Wait for next books

I love Ann Mayburn books. I didn't think they could get any better until I downloaded this book. Smoke is really hot and Andy E Ross has the sexiest voice that I've heard in any Audible book. Can we please have more

Could have been so much more

Would you try another book written by Ann Mayburn or narrated by Andy E. Ross and Stephanie Wyles ?

Im not sure I would