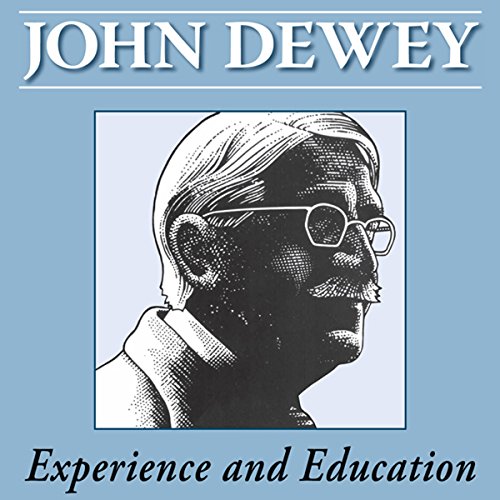 Experience and Education is the best concise statement on education ever published by John Dewey, the man acknowledged to be the pre-eminent educational theorist of the twentieth century. Written more than two decades after Democracy and Education (Dewey's most comprehensive statement of his position in educational philosophy), this book demonstrates how Dewey reformulated his ideas as a result of his intervening experience with the progressive schools and in the light of the criticisms his theories had received.

Analyzing both "traditional" and "progressive" education, Dr. Dewey here insists that neither the old nor the new education is adequate and that each is miseducative because neither of them applies the principles of a carefully developed philosophy of experience. Many pages of this volume illustrate Dr. Dewey's ideas for a philosophy of experience and its relation to education. He particularly urges that all teachers and educators looking for a new movement in education should think in terms of the deeped and larger issues of education rather than in terms of some divisive "ism" about education, even such an "ism" as "progressivism." His philosophy, here expressed in its most essential, most readable form, predicates an American educational system that respects all sources of experience, on that offers a true learning situation that is both historical and social, both orderly and dynamic.

"No one has done more to keep alive the fundamental ideals of liberal civilization." (Morris R. Cohen)

What listeners say about Experience and Education

Great book, but too dense for audio version.

The popularity of John Dewey, American pragmatist philosopher and education reformer, has largely waned. But during his 90+ years of life, he was one of the most famous public intellectuals alive, teaching at Columbia University. But now he is mostly cited in education circles, perhaps more than he is read, and apart from the Center for Dewey Studies at Southern Illinois University, is largely ignored by the academic philosophy establishment. You won’t find his books at Barnes and Noble very often.

I first encountered Dewey after William James, that other famous American pragmatist. Dewey’s book The Quest for Certainty, his review of the history of philosophy, was not the most lively book but it made good points. Pragmatism, the only truly Yankee school of philosophy, stresses the import of thought for action, the practical consequences of philosophical concepts. Rather than the abstract debates over a priori knowledge of metaphysical entities that characterizes Western philosophy, pragmatists called for philosophy to be more like science: more oriented on process, on action. Dewey, who began his career as a Hegelian, extended Peirce’s and James’ thought further. For Dewey, there is no such thing as certainty about entities that exist prior to all experience. Concepts arise from experience and are meaningless unless they bear fruit for experience. This radically recasts or destroys traditional philosophical debates such as free will, the existence of God, and the mind-body problem.

Which brings me to this book. I really enjoyed this book, because Dewey’s points about education are so applicable to my life. Dewey contrasts two modes of education. One, the traditional mode, is based on transmitting static cultural knowledge to largely passive pupils. The “progressive” mode instead seeks to teach not content, but critical thinking; not the knowledge of the past, but the ability to think critically on experiences in the present and future; not information in books but information gained from communities of inquiry and practice. One mode pictures the teacher as a godlike authority, leading the ignorant students to truth, while the other sees the teacher as more of a facilitator. Dewey does not provide examples, but one from my experience will suffice. I spent one year in a high school where science was taught in this “progressive” way. We did lots of fun experiments, but I still can’t tell you some of the basic scientific facts I should have learned, and my preparation for later science courses was subpar.

What’s the rub? Despite his identification with the progressive school of thought, Dewey argues that some moderation is needed. For him, the goal of education is “self-control,” which requires a certain amount of external (teacher) control to inculcate the ability to discipline one’s thoughts and think critically. One of education’s other main goals, the ability to think critically about experience, requires that we at least learn something about the wisdom of the past, insofar as it applies to experiences we will have in the future. So history is not entirely out the window. So education needs to find a middle way between student caprice and teacher control, with a teacher who is not given strict templates of what to teach (standardized testing!) but an ability to adapt content and methods to the students at hand.

One of Dewey’s other main points is that knowledge is not really book-learning, confined to the domain of school then forgotten once the student has moved on from that domain. Knowledge takes place in communities of inquiry. For example, rather than read about archaeological artifacts from the past, students should see the digs, go to the museums, see archaeology at work rather than fossilizing learning. In education systems where learning is done via books and exams – solitary activities – the learning becomes fossilized. One wonders whether online education has made this better or worse.

Dewey died in the 1940s, but his urge to rethink education in a rapidly changing world is more true than ever. For example, he makes the point that those who teach children are older. The knowledge they have needed to make sense of experience may not apply to their students. At my university, the computer science majors aren’t taught Fortran and Pascal; hell, they aren’t taught many software programs at all. Instead they learn theoretical computer science, the principles behind software problem-solving and program design. This ensures that their degree will still be useful in decades to come when even C++ and Java are no longer in vogue.

So I would read this short book. It may be somewhat dated on the debates, but it’s written by a master, the man whom the New York Times deemed “America’s philosopher” on his 90th birthday. It lays out some commonsense but often unrealized or polarized terms for analyzing one’s own schooling. Although philosophy of education gets little attention in philosophy departments now, it is a problem that concerned Plato himself.

(Note: I listened to the audio version on audible. I enjoyed this book, but it was very dense for an audiobook, perhaps too much so.)

John Dewey can us teach how to think

John Dewey could us teach how to think .It is fo sure important what is his writing all about,
but extremely more important how he thinks.It is the process,what is very important,not so concrete conclusions of his thinking about education.I do not
like to use a term “philosophy”.Now among philosophers are many,who are making philosophy to earn a living and themselves are not able to think clearly.

reader was a little dry and topic heavy handed and big SAT word heavy but worth the time.

This book will forever live in my soul. It fead me the knnowledge I crave.

Deweys classic book is more relevant to today's education professionals than ever.

The debate between radio all and progressive educators is stale. But Deweys analysis of the conditions, student needs, and teacher responsibilities are right on target. Given the newest technologies and social networking capacities, experiences are more global and much richer. Teachers have clearer responsibilities to engage students and Dewey describes cogently the required characteristics of engagement.

In spite of my title and Dewey's espoused beliefs on experiential learning, this treatise is worthy of an objective listen.

Strange scratches in the audio

Having had to finish this book quickly for a graduate school course, I was pleased to find an audiobook Version that I could read along with in order to keep me focused. however, there were two distractions: Firstly, the narrator of the material, material that in and of itself is not the most fluid to read, was very monotone and thus I had to take several breaks in order not to fall asleep. Secondly, there were strange scratches in the audio every so often that actually quite startled me and distracted me from the text. Other than that however, I was able to get through the book in a timely fashion.

Would you try another book from John Dewey and/or Gary L Willprecht?

I plan on checking out more Dewey, I hope his other works are less dry and more thought provoking.

A little dated, but a good reminder!

This is a really good read (listen) for any teacher, while a little dated, Dewey is writing in a time when education was very different today (perhaps partly because of Dewey!) but it is a good reminder of what we should be doing. The important job of striking the balance between aiding kids in gaining experience and guiding them as to the nature and direction of that experience is something we should not forget!