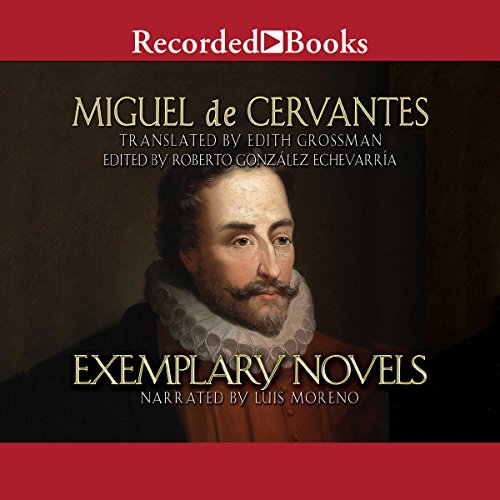 Edith Grossman, celebrated for her brilliant translation of Don Quixote, offers a dazzling new version of another Cervantes classic, on the 400th anniversary of his death. The 12 novellas gathered together in Exemplary Novels reveal the extraordinary breadth of Cervantes' imagination: his nearly limitless ability to create characters, invent plots, and entertain listeners across continents and centuries. Edith Grossman's eagerly awaited translation brings this timeless classic to English-language listeners in an edition that will delight those already familiar with Cervantes' work as well as those about to be enchanted for the first time. Roberto Gonzalez Echevarria's illuminating introduction to the volume serves as both an appreciation of Cervantes's brilliance and a critical guide to the novellas and their significance. Cervantes published his book in Spain in 1613. The assemblage of unique characters (eloquent witches, talking dogs, Gypsy orphans, and an array of others), the twisting plots, and the moral heart at the core of each tale proved irresistible to his enthusiastic audience. Then as now, Cervantes' listeners find pure entertainment in his works, but also a subtle artistry that invites deeper investigation.

What listeners say about Exemplary Novels

Toto, We’re Not in LaMancha Anymore…

When a writer is a recognized giant, and I think their work less than gigantic, I naturally question my judgement. Yes, I enjoyed some of these tales; a few even intrigued me. But all seemed less immediate and engaging than those of Chretien de Troyes, Boccaccio, Chaucer, Spenser, Giambattista Basile or even Cervantes’ own Don Quixote. Maybe it was the shock of finding the scourge of chivalric romances writing romances. Or the academic intro’s insistence on their “high literary quality” created a barrier (I was just trying to enjoy them). Maybe the translation, though so long-awaited, isn’t as good as we think. Whether the fault lay with Cervantes, his translator or our reader, there’s something stiff and halting in the way these stories unfold. Or, again, maybe it’s just me.

Certainly, the historical and cultural context, the details of Cervantes’ biography and the literary insights provided in the introduction (placed at the end of this recording) are helpful. For example, my puzzlement over one tale that seems to end abruptly with no dénouement, was confirmed. The best insight may be the comment that, for all his modern literary “gamesmanship”, for all his playing with “indeterminacy”, (both trendy academic concepts I distrust) Cervantes was not a modern—a bracingly honest antidote to our very modern tendency to value great figures of the past only insofar as they conform to our current cultural agenda.

There is much good stuff here. As the contemporary introduction stresses, though not "moralistic", these tales certainly serve a moral purpose (see the discussion of witchcraft in the colloquy of the dogs, or Cervantes’ own declarations in his preface). In the end, however, I can be no more than lukewarm about them. They drag. The humor is more often leaden than sparkling. Many times I was tempted, like the dog Scipio, to shout, ““Enough! Go on Berganza, your point’s been made!” True, now I’ll be able to say, “Why, yes, I know Cervantes’ Exemplary Novels” when someone asks me. Trouble is, no one will ever ask me.

Our reader does a fine, if somewhat deliberate, job, deciding rightly not to bother about Spanish accents for his characters, yet pronouncing every Spanish word beautifully. Still, a little more animation might have helped.

Another side of Cervantes

Readers familiar with Don Quixote will be a bit surprised at this collection of short stories by Cervantes. He was writing these at the same time he was composing Book II of Don Quixote. It is similar in genre to the "The Man who was Recklessly Curious" which is a short story he embedded (and for which he was criticized by his contemporaries) in Book I of the Quixote. Most of us would probably not know of Cervantes were these his only works, but they are well written stories with many twists and turns that are designed to demonstrate the consequences of a virtuous or vicious life. Although they lack the slapstick humor of Quixote, they contain the same deep concern for promoting virtue and depict characters from all walks of life. Reading these stories significantly transformed my reading of Quixote by deepening my understanding of Cervantes.