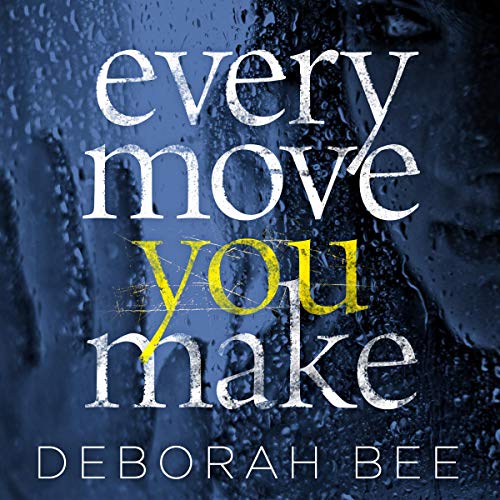 Every Move You Make

Every Move You Make

There are two sides to every story.

But only one is the truth.

A young woman turns up at a police station. She has been kept prisoner in her own home. Abused and tortured, her every move watched, her every thought controlled. Now she's finally escaped.

That's what she says.

But when the police arrive at the address she's given them, her story doesn't seem to add up. Her husband is missing, but his phone and wallet are still in the house.

She says she's the victim, but what if she's not? What if the stories she's telling aren't her stories at all....

What listeners say about Every Move You Make

Boy can this woman write!

This one really caught me by surprise! I was prepared for another one of those cookie cutter psychological female-centered mysteries that we’re getting so much of these days. But this one is really outstanding. Writing outstanding. Story gripping. Much of it takes place in a woman’s domestic abuse shelter, and the various characters are quite compelling. And the closing chapters do not disappoint. I’m just a jaded old male Audible listener with almost a 700 book library - but this is the best thing I’ve read in a long time!

Both author and narrator are perfection in the rendering of this most unusual and exciting tale of a strange mystery. What and who are we to believe? All I can say is: Get this one. So worth a credit. “Every Move You Make” moves up to the top of my vast Audible library. I will most definitely be searching for more by Deborah Bee and featuring Emma Gregory! Epic I say, EPIC EPIC EPIC!!!! ✍🏻👏🌟🌟🌟🌟🌟👏🌟🌟🌟🌟🌟👏🌟🌟🌟🌟🌟👏✍🏻

I listen to psychological thrillers ALL the time and I am quite adept at figuring out what’s going on, if I do say so myself. I had not one clue with this! I kept thinking I had it but nope. Great plot, fabulous characters, some to love, some to hate, a good dose of humor, believe it or not, which I love, and this narrator could be the next Jim Dale!

This not an ordinary domestic violence story. This is a mystery with twists and turns. Totally unpredictable. I love the story, and narration is great too.

This was unlike any book I've ever listed to... and I've listened to hundreds. Although there are certain voices or characters that are very hard to listen to, especially in the beginning (and although this book could definitely be a trigger for many), this book kept me 100% interested from beginning to end! This is a story full of twists and well developed characters, but above anything, the narrator is off the charts talented!! If you like psychological thrillers, I can highly recommend this one

great story even though the subject is disturbing. Wonderful narration by Emma Gregory. I was kept on the edge of my seat until the end. I laughed and cried.

I have rarely enjoyed a story as much as this one. The narration was wonderful, and really gave so much to making it very, very special. I have to just say........listen, and enjoy.

Where to even begin?

Literally listened to the whole book in one day!! I never write reviews and this time it just had to be done!

Deborah Bee is the cure for social isolation

I’m new to this author but owing to terminal boredom in the midst of covid-19 I gave this book a try, I was thoroughly entertained with the dark humour despite the harrowing Domestic VIolence. The narrator was well chosen for the storytelling. I was both gripped by the story, loved the police character and all the residents of the refuge. Some twists and a few eye openers. Blooming brilliant, I’m looking for my next Deborah Bee

Didn’t want this book to end... best listen so far, and I’ve listened to hundreds of books!! A must read

I NEVER write full reviews, but I have just finished listening to ‘Every Move You Make’ and I feel as though I’ve been to the theatre and seen a real live awesome drama which has left me on a high. Mind you, at the beginning I didn’t think I was going to last the pace. The three main characters took turns at telling sequential chapters, and to start with it felt to me to be really slow and rather boring. But not for long. You must stick with it. The story gradually began to pick up pace till eventually I became totally engrossed in the the events that were unfolding and somehow I was there with the three dimensional characters, living every moment with them. The last few chapters are like a roller coaster. I wanted to know so much what was going to happen, but I didn’t want the book to end... So utterly exhilarating and satisfying at the same time. I can’t impress on you how totally engrossed in this book I became. Author and narrator have both worked their magic and together have left me sated but I know I’ll be looking for more of the same very soon. You mustn’t miss this.

Unbelievably good narration for a very good book. Cannot believe the range of accents and genders this lady can do. Wholly recommend this book.

Grabs you by the neck... and doesn’t let go!

A phenomenal listen! Amazing book, with lots of twists and turns and suspense. Narration was the best I have ever heard, and I listen to a lot of audio books. Download this right now... you won’t be disappointed. My favourite listen this year. Off to find more books written by Deborah Bee or narrated by Emma Gregory. A five star read, across the board.

Probably the best narrator I’ve heard in years really brought a great story to life. Left me wanting a follow up !

I was so into this story that I found myself with a spotless house, because I was so engrossed in this story that I did all kinds of extra chores whilst listening! Well written, well performed. Definitely recommend!

Held me compelled throughout. I never wanted to put it down. The writing and narration are excellent, the characters have real depth. One of my best audiobooks!

I’m only about an hour into this book and I’ve had to turn it off. Whilst the premise so far has got me really interested, and the narrator is fantastic, the whole thing is punctuated with ‘I said’, ‘she said’, ‘she says’ ‘I say’. It’s so irritating and I’m finding myself predicting it and saying it. Every sentence! Does this continue throughout the story? If so I’ll need to return.

Takes a few chapters to get into this book but then I was hooked couldn't put it down. FANTASTIC