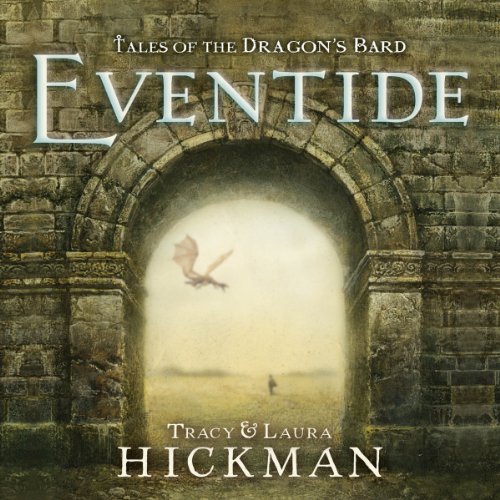 When a traveling bard stumbles into a dragon's den, he is forced to tell stories to the fire-breathing menace or end up being eaten. Eventually running out of tales to share, he makes a deal with the dragon: for his freedom, he will return with new sagas of adventure, romance, and bravery.

Tales of the Dragon's Bard is the story of one man's quest to collect the most exciting stories he possibly can, and Eventide is the first town he encounters. With wish-women, gnomes, a centaur farmer, a resident Gossip Fairy, and a blacksmith dwarf, those living in Eventide have enough going on to keep the Dragon's Bard busy collecting all kinds of stories - especially if he can liven up those adventures a bit with his own ridiculous plots.

This is a wonderful nook. I so enjoyed Simon Vances reading as well.
This is the story of how a writer of tales comes to the mythical town of Eventide.
It is mostly about the trial of a lad called Jarred and his love for a Wish Fairy.
It is also about all the folk in the town and how the Dragons Bard gets involved in there lives.
I really hope that the other books in the series become available.
Very well written and a joy to listen.

This set of charming and witty tales, as told by the Dragon's Bard, is fun and amusing. I even laughed out loud a few times. If you are looking for evil dragons and vengeful fantasy, this isn't the book for you. If you like drunk pixies, sensitive dwarfs, and broken wishing wells, you will find them in Eventide. Good for the whole family.

Simon Vance is at his best.

I love this book!

I love everything about this book. Your mileage may of course differ. If you are looking for dark or edgy, or vampires or werewolves, or detailed battle scenes or blatant sex, you won't find it here. But if you like charm, good story-telling, wit, humor, quirky characters well-presented, all read to perfection--this is the book for you. I've listened to it several times already, and expect to many more. I only wish there were twenty more out there like it, but it's unique in my experience.

pass on this one

this is a fun tale (if a bit predictable) that I will be recommending to all my friends.

the time lines of things was a little confusing at first but once I figured it out it gave the book that story teller feel.