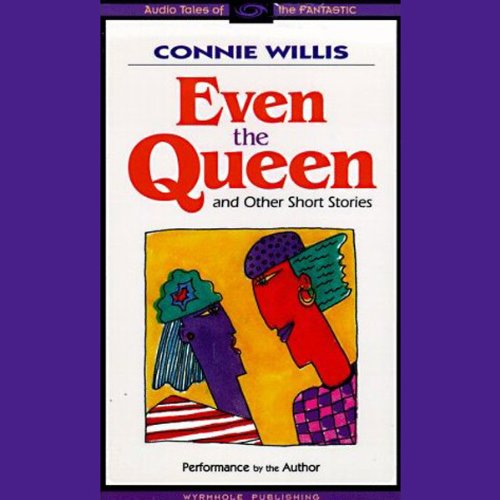 Even the Queen & Other Short Stories

Included are these stories:

"Even the Queen": Virtually every new technology spawns Luddites who insist it's a bad thing. In this case, an entire cult is involved.
Winner, 1992 Nebula Award and 1993 Hugo Award, Best Short Story.

"At the Rialto": A look at a scientific conference held in Chaos Central, and an attempt to explain the link among quantum physics, mid-life romance, and the Frederick's of Hollywood bra museum.
Winner, 1989 Nebula Award, Best Short Story.

"Death on the Nile": The story of a vacation to Egypt gone seriously wrong.
Winner, 1994 Hugo Award, Best Short Story.

"Why the World Didn't End Last Tuesday": Armageddon by committee.

"Close Encounter": Yes, everyone hates hospitals. They're just hating them for the wrong reasons.

What listeners say about Even the Queen & Other Short Stories

Nice to hear the author

I was interested in hearing how Connie Willis is narrating her own stories. Since it wasn't expensive I gave it a try.
First, she is no professional narrator. This said, she does a real nice job reading her stories.

I'm a fan of her long, elaborate novels, but I enjoyed the short stories very much. They bring new ideas and theories and are mostly funny.