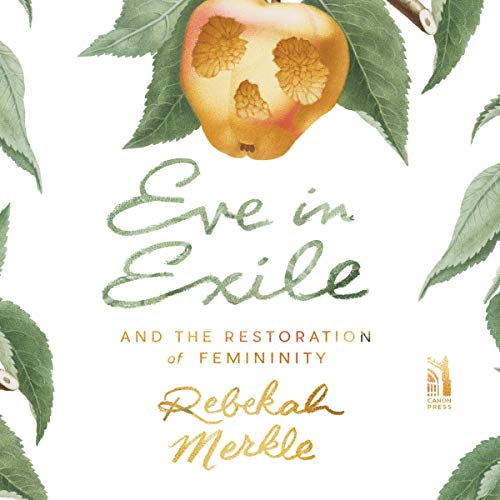 Eve in Exile and the Restoration of Femininity

Eve in Exile and the Restoration of Femininity

The swooning Victorian ladies and the 1950s housewives genuinely needed to be liberated. That much is indisputable. So, First-Wave feminists held rallies for women's suffrage. Second-Wave feminists marched for prohibition, jobs, and abortion. Today, Third-Wave feminists stand firmly for nobody's quite sure what. But modern women - who use psychotherapeutic antidepressants at a rate never before seen in history - need liberating now more than ever. The truth is, feminists don't know what liberation is. They have led us into a very boring dead end.

Eve in Exile sets aside all stereotypes of mid-century housewives, of China-doll femininity, of Victorians fainting, of women not allowed to think for themselves or talk to the men about anything interesting or important. It dismisses the pencil-skirted and stiletto-heeled executives of TV, the outspoken feminists freed from all that hinders them, the brave career women in charge of their own destinies. Once those fictionalized stereotypes are out of the way - whether they're things that make you gag or things you think look pretty fun - Christians can focus on real women. What did God make real women for?

I thoroughly enjoyed listening to this book and can't recommend it highly enough! Our culture is in desperate need of women who fulfill their role in life in view of God's intent for us, and this book was a great encouragement to anyone attempting to do so in a culture that wants the opposite for all of us. Great read!

I can’t say enough good about this book. This is the first time I ever read a book like this directed at Christian women and didn’t feel patronized. Smart, sound advice!

Rebekah does an excellent job laying out what God intended in His word when addressing the make up of the family and a woman's role in existence. I would recommend this to men and women of all ages and and seasons of life!

She is a clear communicator. She does a good job of analyzing today's culture, women and the history of why our definition of femininity today does not line up with the Bible.

This was well written and well read. I saw many people confused about who her audience is. I think it is pretty clear that Christian women was primarily her audience. I would agree that the content of this book is greatly geared towards Christian mothers. She does address single women, but it is pretty brief. But just because she doesn't exhaustively mention every predicament a woman in the world could be in, doesn't mean her thoughts don't have value for a variety of women. I think they do. I also appreciated that while this book is clearly a Christian, biblical view on femininity, she doesn't use "Christianese." She speaks in plain terms, doesn't mince her words, so even women who ardently oppose her view or who are not familiar with the Bible, would walk away at least knowing what she said, even if They don't like it. I find a lot of contemporary books on the subject leave you feeling like you think you agree with the author, but you really aren't sure because they use loaded terms without defining them or redefining them in such a way that it no longer has any grounding in the current discussion. I will say, her book is more of a thought trajectory. just putting out some big ideas and thoughts without fleshing them out. I don't have a problem with that because I think the discussion on gender these days is so heated, that people over qualify every single thought they put out there to the point they don't actually say anything substantive. Mrs. Merkle may not flesh out all her big ideas, but she puts them out there clearly and without embarrassment so it is at least a solid diving board into deeper waters. some of these big ideas include, "What if the feminists of the early 20th century had gathered in prayer, rather in bitterness over their situation relative to men's?" "What would it look like if our culture didn't demean homemaking?" "What would it look like if women took their crafts and excelled at them rather than bemoaning how mundane they appear?" these give you a sense of the themes in the book. But despite taking a Biblical, more conservative, view on femininity, she does not let conservatives or societies of the past off the hook. She does point out how the feminist are correct to not make past societies a romantic ideal that we shoukd recreate. She also correctly calls out Christians who want to recreate their idea of what the past was like, rather than what the Bible actually says. this leads her to point out how conservatives can hate Biblical femininity just as much as progressive feminists. she gives the example of how too many conservatives have the idea that women should go to college to "have something to fall back on" in case they don't get married or even dont see a need to educate their girls because they will "Just become housewives." Mrs. Merkle is pretty clear to call this out as a low view of women and femininity and homemakers. She points out that Biblically, women are to learn and teach one another, so education is extremely important and valuable, to say nothing of the influence homemakers have over their children. She also addresses (briefly, but clearly) that many women are scientifically gifted and should not deny their gifts, talents and contributions in male domonated fields. Overall, it was a good springboard for more conversation. I appreciate her directness. it does not dive too deep into the practical application of these ideas, if that is what you are looking for. she Also writes a lot in analogies and metaphors. albeit, they are good metaphors, though sometimes repetitive, at least They are good. nothing is worse than a bad metaphor. But if you don't appreciate thought experiments communicated through metaphors, you may not appreciate the writing style.

This book is a great eye opener as well as encouraging to the moms and homemakers fighting for the hearts of our children! I would recommend this book and great job Rebekah!!

Thoughtful response to the zeitgeist

Worth listening to again. I think I heard conversations from Sunday dinner extended family discussions.

AMAZING! EVERY WOMAN NEEDS TO READ

BEST book I’ve ever read. Finished it in two days! So inspiring and encouraging for women of today everywhere!

This is the most encouraging and delightful book I have ever read on femininity. What a powerful book / audible about God’s design for women in a culture that tears us down. Thank you, Rebekah Merkle, for this book!

Absolutely love the vision of womanhood that Merkle describes here! Inspires me to live more fully as a woman who wants to glorify God with my femininity. Grateful.

As a result of reading this book my eyes are opened much more to the glories that God works through women. Rebekah helped me see more clearly how the gospel is shown in the design of women to enflesh the gospel. I would also commend her turns of phrase which make her points memorable. I also love the way the book builds up so that the last few chapters sing out but based on all that has gone before. I am going to have to give it another listen.