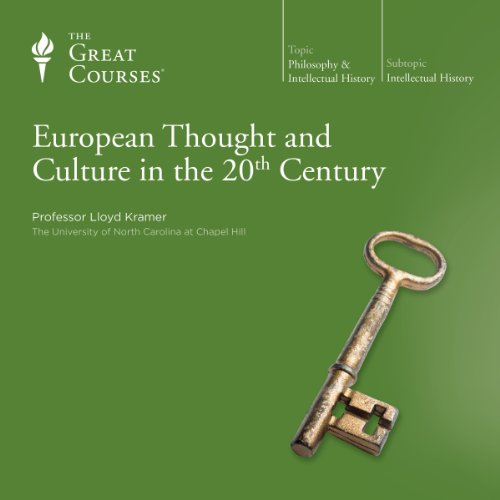 European Thought and Culture in the 20th Century

European Thought and Culture in the 20th Century

As a sequel to European Thought and Culture in the 19th Century, Professor Kramer tackles the major intellectual themes and debates that decisively shaped 20th-century European culture. These 24 lectures cover an amazingly wide range of thinkers and writers, the key historical circumstances and challenges they faced, and the fascinating and subtle ways in which their works relate to one another and to the larger story of modern European culture. You'll look at influential writers such as Stéphane Mallarmé, Joseph Conrad, Henrik Ibsen, Virginia Woolf, and Primo Levi; important painters such as Henri Matisse, Pablo Picasso, Georges Braque, and Wassily Kandinsky; philosophers and theorists such as Ludwig Wittgenstein, Albert Einstein, Edmund Husserl, Jean-Paul Sartre, and Jürgen Habermas; and other key figures in the human and social scientists, including Émile Durkheim, John Maynard Keynes, Hannah Arendt, and Carl Jung.

With a focus on context, cultural innovations, and responses to World War I and World War II, Professor Kramer lends coherence and liveliness to what might otherwise seem a bewildering gathering of intellectuals. But by learning about their lives, their works, and the connections between their ideas, you'll gain a keener insight into a host of movements and trends in the modern intellectual life-including positivism, literary modernism, feminism, structuralism, and Cubism and Abstract Expressionism in painting.

While the lecturer is deadpan and, I felt, a bit of a drone, this is an extremely exciting series of lectures that has already been useful to me as an undergraduate professor if literature, culture, and intellectual history in the 20th-century. A truly BRILLIANT review, especially of continental, in particular of French, thought since the laye 19th-century. While I did fight at times to remain awake in spite of this lecturer's steady, dispassionate, monotone intonation patterns, he's spot on and I take my hat off to him. I'm also astonished at and damned jealous at the applause he receives at the beginning and end of each lecture. ; )

Better than any course I had in college

The topic is marvelous and the lecturer superb. All that stuff you wish you'd paid more attention to when you were younger: key writers like James Joyce, Virginia Woolf, Proust; art movements from post Impressionism onward; philosophers, cultural anthropologists, psychologists (Freud, Jung); up through the post Modernists. Professor Kramer finally explained Derrida and Lacan and worth, as they say, the entire price of admission
Highly highly recommended

Really enjoyed this course. The content
Was interesting and the professor explained it well. I will definitely listen to to it again.

- Very clear lectures
- Immensely well-structured to tackle the period chronologically and to focus at specific intellectuals in depth
- Unfortunately couldn't cover everything but it is an introduction and this is as good as any for a series of 30-min lectures.