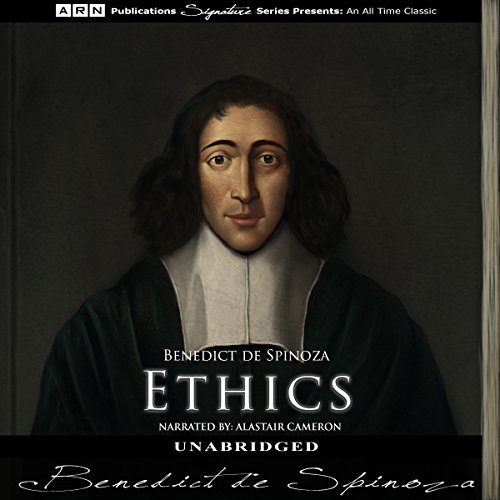 From the mind of one of the world's paramount philosophers comes a profound insight into the universe and man's place in the world. Widely considered to be Benedict de Spinoza's greatest work, Ethics paints an intriguing portrait of reality, the ethical life, and the path to sustainable happiness.

Decades ahead of its time, Ethics provides a step-by-step guide to an ethical life. Spinoza provides insights into the human mind, God, emotions, and man's bondage to emotion. Spinoza guides the listener through his thoughts on shifting from speculation of the eternal nature of the universe to man's place in the natural order as well as the significance of freedom and the power of understanding.

During the second half of the 17th century, Benedict de Spinoza made significant contributions in the area of philosophy. His writings reveal the influences of Jewish Rationalism, Stoicism, and Machiavelli.

I am sorry Spinoza, you are not my author and thinker, got tired of your QEDs, colloralies, eternal reference jungle, hopping from one Lemma to another, such a bad style and construct. Next time, another time, could be, may be. Bye